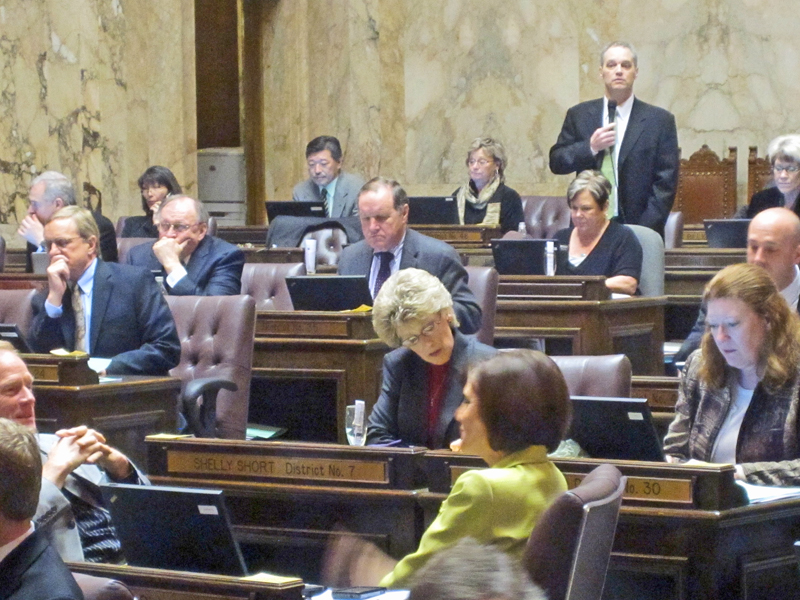 As Lawmakers End a Tax Break for Banks, They Kick a Prop Out From Under a Legal Challenge to Two-Thirds Vote Requirement 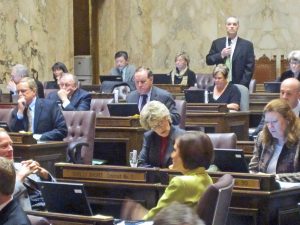 Rising to speak for the tax bill on the House floor, House Ways and Means Chair Ross Hunter, D-Medina.

OLYMPIA, April 17.—You might not see anything ironic or even particularly funny about this year’s tax legislation if you’re one of the nation’s biggest mortgage lenders, but if you follow the tit-for-tat in the Washington state Legislature, you can see that it wasn’t just about ending a tax break for Wall Street banks.

By eliminating a longtime tax deduction for multi-state banks writing first mortgages in Washington, lawmakers may have kicked the props out from under a Democratic legal challenge to I-1053. That’s the measure that requires a two-thirds vote of the House and Senate for any tax increase, and which has had a dramatic effect on the state Legislature. Since it was passed in 2010, the initiative has practically stopped any talk of big tax increases before they can get started, because Democrats don’t have a big enough majority to pass them on their own.

The basis of the challenge? Last year lawmakers couldn’t eliminate the bank tax break. And the problem? This year they did.

“The courts should be able to see that it is possible to do one of these bills,” said House Minority Leader Richard DeBolt, R-Chehalis. “I don’t think their case has legs to stand on.”

It is the subtle legal issue that lurked in the background of the Republicans’ surprising reversal this year on the banking tax break. By giving on that one and providing the votes to eliminate the tax break in the waning hours of the just-finished legislative session, they undermined the central argument in the high-profile challenge that was filed last year by 12 Democratic legislators, the Washington Education Association and the League of Education Voters, among others. In the scheme of things in the state Legislature, survival of I-1053 may have been judged more important. The two-thirds vote requirement has given minority Republicans power beyond their numbers in the Legislature, giving them the ability to block big tax increases that otherwise surely would have passed.

Democrats have been railing against the bank tax break for years, and they took the deal when Republicans offered it – though if you go back and watch those speeches from the final night of the session, you can see that at least a few of them understood what it did to their legal argument.

Washington voters have imposed the two-thirds requirement on the Legislature four times over the last 19 years, a necessity in a state where it is possible for lawmakers to repeal or suspend an initiative with a simple majority vote two years after passage. Where supermajority requirements are concerned, eventually they always do. The two-thirds requirement might be seen as an attack on whatever party is in charge of the Legislature. In Washington, about as blue a state as they come, that means the two-thirds rule is really a challenge to the Democrats who have controlled the Legislature and the governor’s mansion for most of the last three decades. Many insist it is unconstitutional, because the state constitution says it takes a majority vote to pass a bill, and it doesn’t say that additional requirements can be placed on the Legislature.

But getting the state Supreme Court to decide the issue – that’s the problem. Every time voters pass the rule, someone files a constitutional challenge, and the court shoots it down for other reasons before that question can be addressed. Either the time isn’t ripe and harm can’t be shown, or plaintiffs otherwise lack standing to sue, or the court finds that the Legislature has other procedural remedies that haven’t been exhausted. The latest challenge, argued in King County Superior Court last month, was supposed to be the strongest one yet.

It really started last May 24, the night before the 2011 session ended. Democrats were pushing a bill that would have eliminated the business and occupations tax deduction for large out-of-state banks, on interest they receive on first mortgages. Labor and activist groups had been making the bill the poster child for a crusade against tax “loopholes,” stoked by furor over bank bailouts and the collapse of the mortgage business. But there was plenty of sympathy for the tax break in Republican ranks. The banking industry had agreed not to oppose a big tax increase in 2010, as long as the B&O tax break remained on the books. And those two tax hikes together would make Washington one of the highest-taxed states in the country for multi-state banks, possibly restricting the money available for loans.

The bill required a two-thirds vote, because eliminating a tax break is the same thing as a tax increase. And since there was no chance of passage whatever, first-term House Democrats twisted the knife by crafting a bill that would divert the new revenue to reducing class sizes in K-3 classrooms. “The freshman project,” they called it. But that wasn’t all. House Speaker Frank Chopp made a rare appearance on the dais that night, engaging in a scripted colloquoy with the freshmen. In response to their questions, Chopp said he had no choice but to demand a two-thirds vote, and if the bill got a majority but not a supermajority, he couldn’t let it pass. If he did, he could be charged with malfeasance, he said, his own feelings about the rule notwithstanding.

“Having personally faced this ambiguity for 13 years, the speaker would appreciate clarification from the courts on how to resolve the differences between the provisions of the constitution and the statute,” he said. In response to another question, he noted that while the House could overrule him, it couldn’t declare the rule unconstitutional on its own.

The bill passed with 52 votes, a majority, but not the 66 votes required for a supermajority. Chopp ruled that it had failed. Not long after that the lawsuit was filed. It cited the banking bill as the prime example that proved the case.

Sails Through With Two-Thirds Vote

Fast-forward a year. Republicans changed their stand on the banking tax break, declaring that they had decided the case for it was weak. It became part of the deal that ended the session. It partially satisfied Democratic demands for new revenue, even though it represented only a modest $16 million this year because the housing market is in the doldrums. The repeal was embedded in a bill that extended and created other tax breaks, SB 6635.

A few of those House members who signed on to last year’s lawsuit seemed to catch on to the legal implications when the bill came up for a vote in the wee hours, last Wednesday morning, just before adjournment. Several made speeches pointing out that this year’s bill didn’t divert money to education like last year’s, which made it a different proposal, and their remarks had the sound of speeches designed for later interpretation by the courts. Said Christine Rolfes of Bainbridge Island, now a senator, “I voted for closing the tax loopholes on banks last year in order to generate revenue for smaller classroom sizes for elementary schools, and it failed because we couldn’t get a two-thirds vote out of the House and never even got a vote in the Senate. So I want to point out to this body and anybody who may be listening that this bill makes it clear to me that the only way to get a two-thirds vote from the Legislature is to grant four additional tax loopholes in exchange.”

But the bottom line was that the bill passed by the two-thirds vote required by law. It passed the Senate 35-10, and the House 74-24. Says state Rep. Ed Orcutt, R-Kalama, the House Republican lead on tax policy, “This Legislature has proven that when it is reasonable and appropriate, you can garner a two-thirds vote.”

What Happens to the Case?

Exactly what happens to the I-1053 lawsuit is unclear. Passage of the tax bill doesn’t exactly render the lawsuit moot, because the plaintiffs aren’t asking the courts to rule specifically on the failure of last year’s banking bill in the House. Even if that one is no longer an issue, the suit also cites a couple of other bills that failed in previous sessions for the same reason. Nor is the suit asking that the bills be declared passed. Rather, the remedy it seeks is that the two-thirds rule be overturned. But as for the thrust of the case, that’s something else. The attorney general’s office, which is defending the initiative, offers a rather clear summary: “Plaintiffs generally allege that the two-thirds supermajority vote provision of [Initiative 1053] has prevented the Legislature from enacting tax increases. Then then allege that the Legislature has been unable to increase, or has had to cut, state revenues for programs that plaintiffs support.”

And now the Legislature has proven the argument wrong, says Michael Reitz, attorney for the Freedom Foundation, an Olympia-based free-market think tank. The vote demonstrated that the two-thirds vote isn’t an insuperable hurdle. Generally speaking, he says the courts insist that cases regarding legislative procedure be ironclad before they weigh in on constitutional questions. The action this year demonstrates that lawmakers can find ways to live with the rule.

“I think it could pose some very significant problems for the challengers, because I think most judges would say, what are we here for now, since you’ve got what you want?”

Gov. Christine Gregoire says she thinks there’s still a strong argument to be made against Initiative 1053 and supermajority requirements like it. If it hadn’t been for the initiative, she says she would have pushed harder for tax increases this year, and she says it is the job of the Legislature to deal with questions like those. “The fact of the matter is you can’t even think about raising revenue,” she said.

But getting the court to rule on a philosophical question, rather than a legal one, may be a bit difficult.

The interesting thing is that the action during the final hours of this year’s legislative session sets up the possibility of a different kind of challenge to I-1053, although the prospect there might be a little distant. Lawmakers passed a bill that extends current manufactured-cigarette tax rates to “roll-your-own” cigarettes assembled by consumers, using high-tech cigarette-packing equipment that has been installed in 65 stores statewide. By selling tobacco that way, the stores have been able to charge the much-lower tax rate for loose tobacco. The smokes are half-price. Chopp and Lt. Gov. Brad Owen both ruled that House Bill 2565 “clarified” existing taxes, rather than raising them, and so only a majority vote was required. In the Senate, the bill passed 27-19 – a majority, but not two-thirds. The “R.Y.O.” stores, as they are called, could file a suit seeking to declare the measure an improperly-passed tax increase. That raises the possibility that others might use it as a vehicle to ask the court to rule on the constitutional question. But Reitz notes the court could decide the legality of the tax without considering constitutional arguments.  Another lawsuit, anyone?