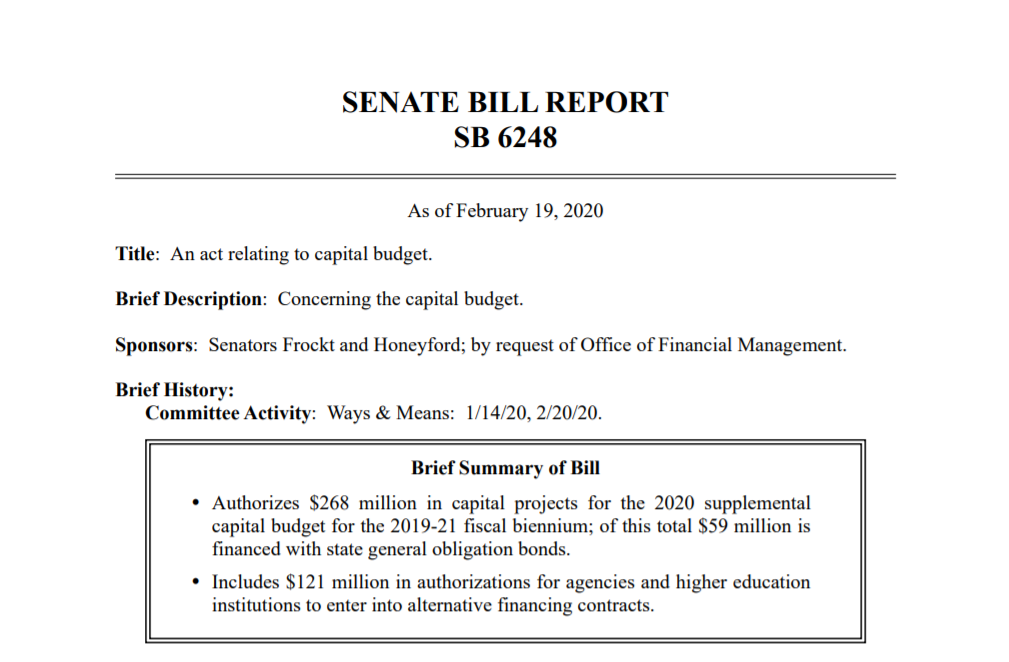 The Senate Ways & Means Committee released the 2020 capital budget this week, highlighting $268 million worth of capital projects for the 2019-21 biennium, $59 million of which will be financed with general obligation bonds.

The capital budget also includes $121 million in authorizations for government agencies, colleges and universities to pursue alternative financing contracts. Some other funding sources that can be used to fund certain projects outlined in the capital budget include taxes, fees and state land trust revenues, according to the bill report for Senate Bill 6248, the bill that introduces the Senate’s latest version of the capital budget.

In addition, the capital budget allocates $10 million to the construction of affordable housing, and $15 million is appropriated to increase homeless shelter capacity.

“Your $10 million will go a long way in the next year to preserve many units,” said Michele Thomas, director of policy and advocacy at the Washington Low-Income Housing Alliance. “Over the next five years, we have 5,000 units at risk of being lost and over the next 10 years, that goes up to over 12,000. Your investment goes a long way.”

Providing for the state’s growing need for affordable housing and temporary sheltering services was a priority for legislators on both sides of the aisle this session. While Republican caucus leaders rolled out a package to address homelessness earlier this session, Democratic leadership also rolled out efforts to address both issues, resulting in a $25 million investment to help alleviate homelessness. According to a press release from Sen. David Frockt’s office, the allocation is the largest investment of its kind to be included in a supplemental capital budget.

“Our budget proposal spends nearly one-third of [the budget]] capacity on shelter and affordable housing, reflecting Senate Democrats’ priority to assist our local partners who continue to struggle with the crisis,” said Frockt in a statement.