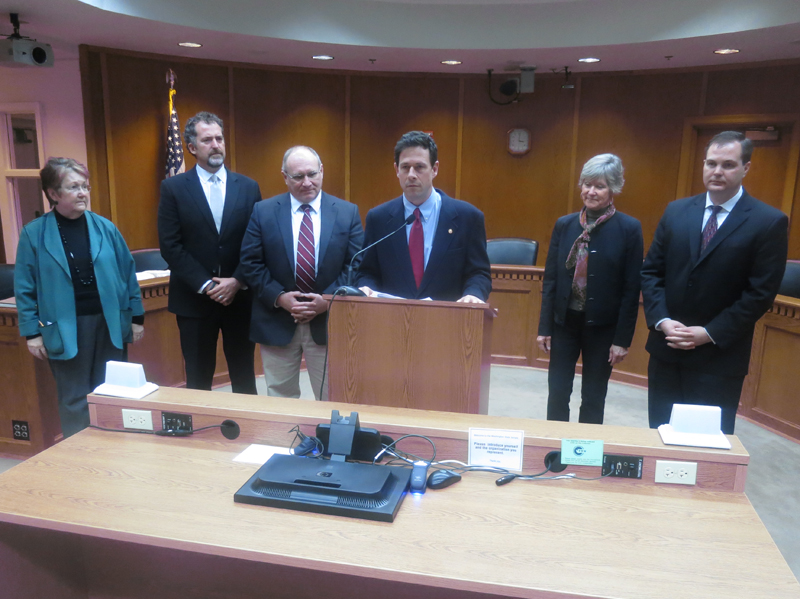 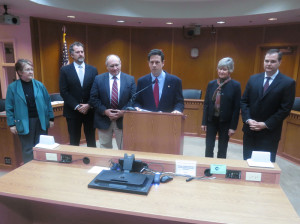 OLYMPIA, Feb. 24.—A bipartisan Senate budget proposal released Monday shows lawmakers could get out of Dodge by sine die, if they want to. Now it’s up to House Democrats to decide if they’d rather stay and fight.

The $96 million Senate spending proposal manages to duck every question of controversy. There’s no teacher pay raise. Not a single tax break was harmed in the writing of this bill. And the big $5 billion debate over K-12 spending has been deferred to next year. It is the fruit of bipartisan negotiation in the Senate, and you might say the most important agreement this time around is the idea that neither party seems much interested in hanging around the Capitol for months on end. They’re ready to shake hands and go home on time, 16 days from now.

“Last year we did the heavy lifting — it took us six months,” said Senate Ways and Means Chair Andy Hill, R-Redmond. “We carried on with what we did last year and this is just a continuation, because it really is just an update.”

Agreed Sen. Jim Hargrove, D-Hoquiam, “We weren’t going to go through the torture we did last time.”

Now the Democrats who control the House have a choice to make. They can do it the easy way, or they can do it the hard way. We’ll know more by the end of the week. The House is expected to offer its own supplemental budget proposal in the next few days. There is one hint that it won’t be smooth sailing: A proposal for a teacher pay raise, a budget-busting $74 million expense, has 53 sponsors in the House. That’s more than enough votes to pass the bill, and it is a sign the House Democrats may not be so eager to hold the line.

The interesting thing about it, though, is that if the House wants to stay and fight, nothing says the Senate has to. It could just say the heck with things and leave.

Delays Torture Until Next Year

Early on there was plenty of doubt as to whether the Senate would even bother with a budget this year. Last year lawmakers passed a $33.6 billion two-year spending plan, covering the period between July 1, 2013 and June 30, 2015. And for the first time in five years, nothing has gone haywire. The budget is in balance, and there are no dire shortfalls that force lawmakers to do a rewrite. Hill, the Senate budget lead, wasn’t sure a new spending bill was worth the trouble.

The big thing is that the Senate isn’t even thinking at this point about the trouble in store next year when lawmakers will have to contemplate the big picture. The state Supreme Court, with its McCleary decision, is ordering lawmakers to increase spending on K-12 schools by $5 billion by the 2017-18 school year. It is the staggering sort of number that is hard to imagine reaching without a tax increase – the kind of thing that will take months to hash out. And much though the Supreme Court would like lawmakers to come up with a plan to raise the money – it issued an order in January that they produce some sort of a plan by April 30 – it appears that whatever document lawmakers provide to the court will be a vague back-of-the envelope sort of feel.

Hill says lawmakers took one look at that idea and decided it was a debate they just can’t finish if they want to go home on time. “If you look at what it takes to get 147 legislators to agree on something, it is a long process. This was a short session. And we didn’t see these things moving out of the House, either, so the signals weren’t very strong there, either. When Jim and I sat down at the beginning of things, one of the things we thought is that we wanted to build a supplemental budget and have some of these more controversial issues separated from it so that we could get the work that we absolutely have to get done and get it passed.”

So an early-session proposal from Gov. Jay Inslee has been ditched – there’s no talk of ending tax exemptions for business, a $200 million idea that landed with a thud. In fact, the budget bill assumes passage of $10 million in tax breaks, the most significant being an $8 million reauthorization of a high-tech research and development tax credit that is due to expire. This year’s 60-day legislative session is due to end March 13 – not much time left for argument.

For all the rancor that has taken place on the Senate floor this year during partisan debates, there seems to be little disagreement between the two parties on the budget bill. The spending plan was negotiated between four lawmakers – Hill and Sen. John Braun, R-Centralia, on the Majority Caucus side, and Sens. Hargrove and Kevin Ranker, D-Orcas Island representing the Democratic Caucus. “Sometimes it is more important to focus on the areas where you agree, instead of on the differences,” Ranker says. “This was really positive, and quite frankly it has a strong imprint of bipartisanship. And I can say I’m proud of this budget.”

You might say the big items in the Senate budget fall into two categories – the ought-to-dos and the want-to-dos. In the first bucket you have $25 million for increased childcare programs, most of it to pay for a collective bargaining agreement negotiated between the state and childcare providers. Some $7 million pays for a court settlement requiring the state to beef up children’s mental health programs. And there’s $7 million to pay for unexpected firefighting costs on state lands during 2014.

After that come a few things that don’t really rise to the same level — call them want-to-dos. There’s $25 million for college scholarship programs in science, technology, engineering and math. That represents the state share of a matching-fund agreement with private donors, most of them large corporations. Business has already put up its share – and the state eventually has to uphold its end of the bargain.

Then there’s $38 million for K-12 overhead costs – things like books, transportation and equipment. That goes a little way toward financing the Supreme Court’s demand, but not much. If the money is included in the supplemental budget this year, the spending will be permanently baked into the K-12 budget. During the next two-year budget cycle it will amount to about $100 million. That leaves just $4.9 billion to go.

The Real Hope Act – the once-controversial measure that opens public college financial-aid programs to the children of illegal immigrants – is allocated $5 million. But it should be noted that the funding does not require passage of a separate budget bill. The measure passed by House and Senate this session already provides money for that purpose.

There are a few other relatively small-scale spending items – for things like increased prison capacity and mental health programs. College tuition would remain flat for the second year in a row. The books balance with $50 million in fund transfers. Next year lawmakers will have somewhere between a half-billion and $1 billion in the bank, depending on how they want to count things. That money could be used to jump-start the long-simmering education debate. “Of course we haven’t given up on education funding,” Ranker said. “We will continue that dialogue.”

Next Move Up to the House

The Senate budget will get a hearing today in the Ways and Means committee, a vote tomorrow, and a send-off on the Senate floor Thursday. The next move is up to the House. At this point, Democratic leaders aren’t tipping their hand.

“We haven’t had much time to review the Senate budget, but it keeps the process moving,” said Senate Majority Leader Pat Sullivan. “We look forward to presenting our own proposal and sitting down with the Senate to resolve our differences. Our plan is to be done on time, and we continue to be on that trajectory.”

Meanwhile, Democratic Gov. Jay Inslee issued a statement urging the House to fight. “The proposal acknowledges the pressing need to address our constitutional obligation to basic education,” Inslee said. “While the Senate proposal does not go far enough in that regard, it’s a start. I urge the House to make a more substantial investment in education – one that does more to provide our students with the classroom tools they need and restores cost-of-living increases for our teachers.”