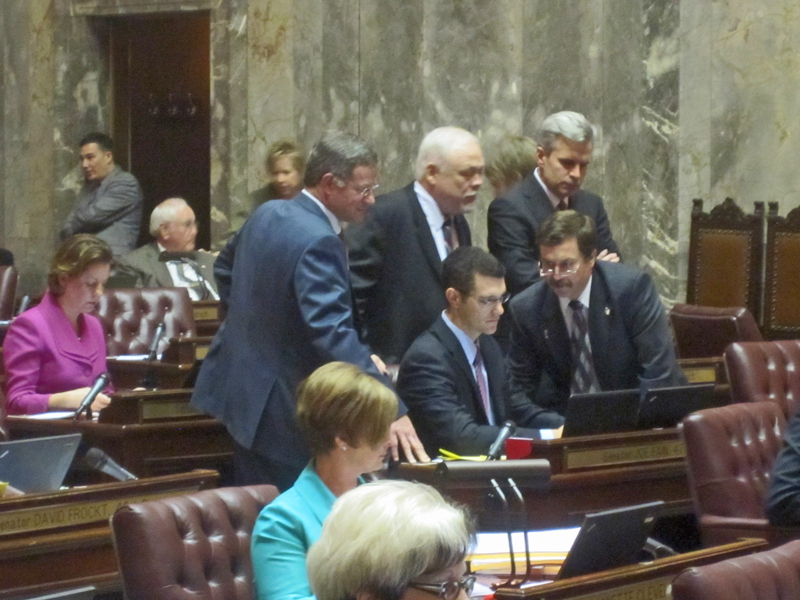 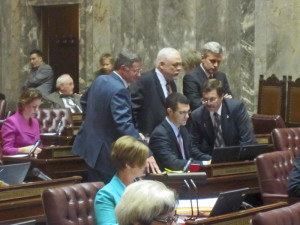 Republican senators huddle on the floor as votes are counted on the first of the education measures, the report-card bill.

OLYMPIA, March 6.—The state Senate passed a spate of education-reform bills Wednesday, reinforcing a core belief of many Republicans, centrist Democrats and idealists everywhere – that money isn’t everything. Consider it a warm-up for the big battle to come later this session over school funding. At least a couple of those bills are likely to prove difficult for elements of the K-12 establishment to swallow.

They include a new A-through-F report card for school performance and greater management authority over teacher assignments – posing a conflict with union collective bargaining procedures.

Wednesday’s action, the first lengthy debate in the Legislature for a month, and really only the second of the session, offered proof that the Republican-leaning Senate majority hasn’t given up on school reform, said state Sen. Bruce Dammeier, R-Puyallup – a topic of speculation in some recent press accounts. “The bills that you are seeing offer evidence that we are not scaling back,” he said. “We are challenging the status quo.” And borrowing a phrase from Washington’s new governor, he added, “We are trying to bring about disruptive change.”

Nevertheless, the one measure that promised the greatest fireworks – Senate Bill 5329, which would have allowed the state to take over failing schools – was pulled from the calendar at the last minute.  And the report-card and teacher-assignment bills are controversial enough that they may not see the light of day until the Legislature’s endgame, sometime at least six weeks from now. They are destined for the House Education Committee, where measures opposed by the state teacher’s union, the powerful Washington Education Association, traditionally go to die.

Members of the Senate Majority Coalition say the bills approved Wednesday are inextricably linked to the session’s big-picture K-12 issue, the scramble to pay for the Supreme Court’s billion-dollar-or-more mandate to spend more on basic-education programs. That school-funding debate really begins once a new state tax-revenue forecast is released March 20 and lawmakers learn how much they have to spend.  Members say they will insist that reforms are considered as part of the inevitable session-ending compromise. “We’re trying to reconnect school funding with student achievement,” said Sen. Linda Evans Parlette, R-East Wenatchee. “We’re just trying to make the point that more money doesn’t mean better results.” 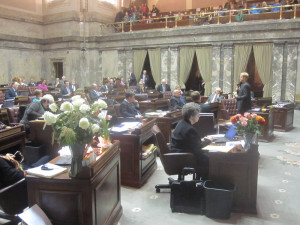 Freshman Sen. John Smith, R-Colville, argues for the report card bill: “It isn’t the scale that makes you overweight. Your speedometer doesn’t make you speed. And taking your gas gauge out doesn’t make your car more efficient.”

The Senate passed nine measures during the marathon day-long session, and most sailed through with a minimum of debate on strong bipartisan votes. Yet the one likely to win the most attention in the weeks ahead is the bill that arguably does the least, offering letter grades for the state’s 2,000 K-12 schools. A school that gets an F won’t be taken over by the state — nor can it be kept after class, forced to attend summer school or repeat a grade. But you might say it gets to wear a public duncecap. Senate Bill 5328 essentially renames the rankings that are awarded by an assessment program launched by the state Board of Education five years ago. But what a difference that new report card is expected to make, when the program is rolled out statewide in 2014-15: By dispensing with education-speak and using language the general public can understand, backers expect angry parents to clamor for change when their local school flunks. “Everyone understands A-through-F,” said Senate Education Chairman Steve Litzow, R-Mercer Island. “We have all done it. We have all been graded ourselves.”

Right now the State Board of Education evaluates school performance on a variety of criteria, using a one-to-seven point score, and then it awards rankings of a rather gentler nature: “Exemplary,” “Very Good,” “Good,” “Fair” and “Struggling.” A third of the state’s schools rank in the bottom two categories. By calling them “D” and “F,” supporters say voters will understand what those ratings really mean. “The fact that a school is graded with a D or an F is going to give a real impetus for individuals to say I am not taking this, we’re better than this,” said state Sen. Mike Carrell, R-Lakewood.

Simpler yes, and easier to understand – and that’s just what opponents are afraid of. All members of the Senate Democratic Caucus voted no, save Sens. Steve Hobbs, D-Lake Stevens and Brian Hatfield, D-Raymond, who were consistent votes for the day’s ed bills. The report-card measure passed on a bare 26-23 vote. Some Dems called it too simple; others said it would be a “scarlet letter.” State Sen. Rosemary McAuliffe, D-Bothell, said people’s feelings would be hurt. “Labeling them A through F does nothing but cause them to feel degraded, cause them to feel like they have failed, and cause those schools to feel like there is no hope.”

The measure, while it might seem largely symbolic, is an important step in invigorating public debate about public schools, argues Liv Finne of the Washington Policy Center. Under Gov. Christine Gregoire, she said, spending for K-12 schools increased 32 percent without measurable improvement. “Adopting letter grades for schools, so the public understands how their schools are doing, is a strong and tough step toward achieving real accountability for the $10 billion taxpayers provide the schools every year,” she said. 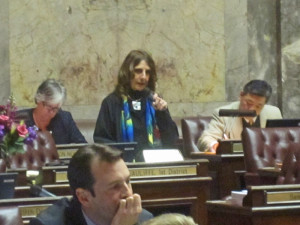 Sen. Rosemary McAuliffe, D-Bothell, the Senate Democrats’ education lead, won passage for a McCleary-related bill, but remained a skeptical voice throughout the debate.

As education-reform groups lined up votes for the school measures, there had been speculation that Republicans might balk at proposals that reduce local control. With the school-takeover measure off the table, the split never occurred. As it turned out, the report-card bill was the low-water mark for support – only one Republican, Kirk Pearson, R-Monroe, peeled off. Other bills with somewhat greater effect garnered support from the full Majority Caucus as well as from members of the Senate Democratic Caucus. Among the more controversial was SB 5242, which passed 27-22 – a measure that takes teacher assignments off the bargaining table. Where assignments now are generally based on seniority due to collective bargaining agreements – mitigated indirectly and to a small degree by a teacher-evaluation bill passed last year – the measure would allow principals to select the teachers who work at their schools. If superintendents are unable to find new assignments for teachers, they could be cut. “Principals keep telling me that if we’re going to hold them accountable for their schools, they want the flexibility to determine who their teams are,” Litzow said.

But state Sen. Steve Conway, a staunch ally of labor, said the measure will erode protections for teachers that collective bargaining provides. Principals might be able to retaliate against teachers who are critical of school administrators, he said. “It is a huge attack on the bargaining rights of our school employees,” he said. 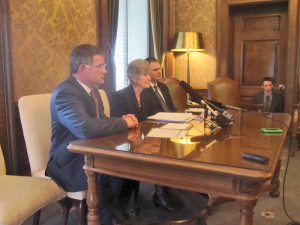 Although two Democrat-sponsored bills approved Wednesday addressed issues raised by the McCleary decision, the Washington Education Association complained that the measures sponsored by members of the Majority Caucus failed to address school funding – which it considers the state’s top education issue. “Not one of these [Rodney] Tom/Litzow bills does anything to comply with the court’s order to increase funding for our kids’ schools, nor do they fund the promises legislators made in previous education legislation,” said spokesman Rich Wood. “Washington has the fourth-most crowded classrooms in the country, which makes it harder for teachers to teach and for students to learn. To give our kids the quality education they need and deserve, we must invest in smaller class sizes. Yet not one of these Tom/Litzow bills does anything to reduce class sizes. That’s a shame.”

“We need our leaders in Olympia to focus on making sure all students in all parts of the state have equal access to a quality public education. These misguided bills are not the answer.”

Said Dammeier, “Are we driving our legislation around the teachers’ union? No. We’re driving around what is best for kids. And I think in many cases the two will be the same, but perhaps not in all.”

Other bills passed by the Senate Wednesday during its “education-day” extravaganza included:

SB 5237, sponsored by Dammeier and approved 35-13, which establishes a plan for early intervention when children through grade three fail to read at grade level. At third grade, lowest-scoring students would repeat the grade or be required to participate in summer school. Children who miss the mark at that point have a 20 percent chance of catching up and are four times more likely to drop out. Critics noted that the measure would cost $77 million: “I would like to speak like a third-grader for a moment,” said Sen. Christine Rolfes, D-Bainbridge Island. “If we don’t end session with this bill funded and with the McCleary decision funded, I am going to personally pour a glass of water over Sen. Dammeier’s head.”

SB 5587, sponsored by Litzow and approved 29-20, which establishes a transition plan for the use of standardized tests for graduation requirements.

SB 5794, sponsored by Dammeier and approved 43-3, which streamlines alternative learning programs and encourages the use of online courses.

SB 5491, sponsored by McAuliffe and approved 47-0, which requires the state to use a single set of indicators and performance goals to monitor compliance with the McCleary decision, including test scores, graduation rates and the percentage of students who continue on to college.

SB 5244, sponsored by Litzow and approved 48-0, which limits suspensions and expulsions to one year and requires school districts to attempt to reengage students after punishment.

SB 5330, sponsored by Jim Hargrove, D-Hoquiam, and approved 48-0, which requires that a share of basic-ed money allocated for McCleary be directed toward specific student and teacher-assistance programs.