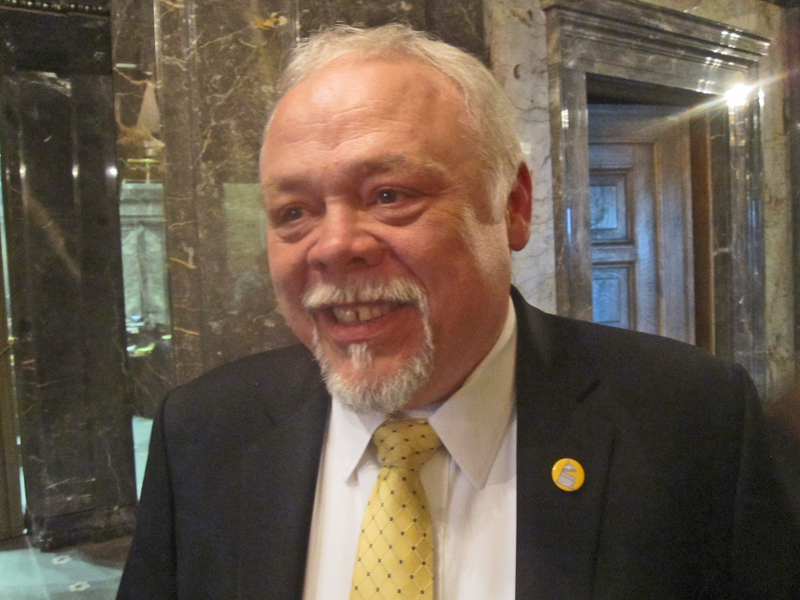 After Week of Battle, Transportation Committee Finds Way to Compromise – State Forced to Take Notice of a Local Battle Over Light Rail 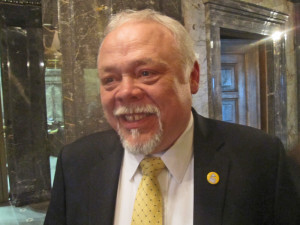 OLYMPIA, April 19.—After more than a week of battle, the state Senate finally found a way to strike a deal on a controversial Columbia River bridge project, clearing the way for lawmakers to pass a transportation budget Friday 47-0. That’s one fight out of the way, but it certainly isn’t the end of it. The project is proving mighty difficult for the Washington Legislature to swallow even as Gov. Jay Inslee throws his political capital behind it, and it is drawing the state’s attention to an argument that until now seemed to be a parochial Clark County spat.

Under the Senate plan, the bridge project will remain on life support and the state will offer a trickle of planning money, until the U.S. Coast Guard can decide whether the blueprints pass muster. Yet an even bigger decision about state spending on the project will be deferred until lawmakers consider a transportation-tax increase. That might come this session, maybe next.

The fight over the $3 billion-plus bridge project brought debate over the transportation budget to a standstill in the Senate as Don Benton, R-Vancouver, the most vocal of the bridge opponents, demanded that the project be stricken from the spending plan. At one point last week, Inslee brought in U.S. Transportation Secretary Ray LaHood to tell the Senate Majority Coalition it was “time to fish or cut bait” – a tactic that only seemed to make members angry. And as the Senate balked, the House took the unusual step Tuesday of passing its transportation budget out of order, not waiting for the Senate to pass its version.

Thus a fight over a bridge on which engineering issues seem less important than politics finally has begun to generate interest beyond southwest Washington. Other regional interests with highway projects of their own have begun to take notice because a holdup on money for projects statewide affects them as well. It’s why lawmakers said Thursday they are relieved a compromise might be in sight – albeit a temporary truce that doesn’t settle the issue. Senate Transportation co-chair Tracey Eide, D-Federal Way, said Benton met her halfway. “At least it keeps the lights on,” she said. 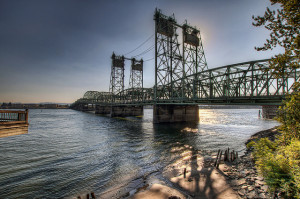 Existing Interstate Bridge at Vancouver: Oldest portions opened in 1917, including a drawspan that offers 176 feet clearance.

The deal approved Thursday in the Senate Transportation Committee would allocate $81 million in planning money for the Columbia River Crossing, but $78 million would be withheld until the Coast Guard issues a permit for the project. That decision is expected to come later this year – and CRC opponents are counting on the Coast Guard either to say no, or to impose such enormous costs that the economics of the project would go into a death spiral. If that happens, state planning money could only be spent to redesign the project.

No point throwing good money after bad, Benton said. “This is a big win for the people of Clark County, people across southwest Washington and for our Majority Coalition Caucus. All of us want a project that meets the needs of commuter, employers, taxpayers and future toll-payers in terms of design, and also doesn’t waste money. My amendments are exactly in line with those priorities, and our coalition stood with me to make sure they will be rolled into the budget.”

The Senate budget also would require the Joint Legislative Audit and Review Committee to conduct a forensic audit of the Columbia River Crossing project, to examine charges by bridge opponents of waste, fraud and abuse in the planning process. A separate amendment would require private contractors on the project to open their books. 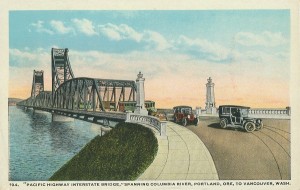 Originally a single span, the bridge was reconstructed as a substantially modified twin structure when I-5 went through in 1958.

The Senate position runs counter to the House version of the budget, which would continue allocating planning money without restriction, and would not impose audit requirements. It calculates planning needs differently and provides $49 million. An amendment that would have forced the state to start over was defeated on the House floor Tuesday, and the floor fight prompted an unusually divided vote on the transportation budget, normally one of the least controversial bills of any legislative session. The House vote was 68-28.

Still up in the air is the big-ticket decision regarding construction costs. Under a deal worked out with the state of Oregon, the state would put up $450 million. Washington’s allocation hinges on passage of a transportation-tax plan — an altogether uncertain prospect all by itself. Leaders of the fiscally conservative Senate Majority Coalition aren’t saying they’re going to support it, but they say they certainly won’t say yes if the bridge is included.  An $8.4 billion tax plan that emerged in the House this week would allocate money for that purpose, a sure sign this fight is far from over. 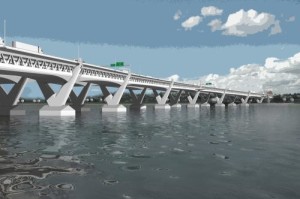 An early artist’s conception for the new bridge illustrates the salient features: Low clearance, no drawbridge, and a flat design that works for light rail but makes little accommodation for upstream industry.

To hear opponents tell the story, the planning for the Columbia River Crossing is a matter of bungling on a colossal scale. Some of the objections are of the sort that might come with any costly bridge project: Tolling would be required to defray some of the cost, and the price for Washington commuters would be large, perhaps $5 to $8 a day. But the biggest hitch is light rail. Portland transit interests are insisting that the bridge extend the Tri-Met rail system north of the river, a momentous decision that

means its costs would be spread upon taxpayers on the Washington side. Various tax proposals have been rejected by Clark County voters four times.

But politics aside, there also is a design problem that ought to have been evident from the start. Because the Columbia River Crossing would replace the existing I-5 bridge, its location is locked in place. The current bridge, portions of which opened in 1917, uses a drawspan that offers 176 feet clearance – enough for all the industrial interests that have located upstream since settlement of the Pacific Northwest. A central goal of bridge planners has been to eliminate the drawspan, which impedes traffic whenever it is opened. The trouble is that light rail requires a flat bridge with no big bow in the middle. A nearby airport requires that the bridge and its approaches can’t tower hundreds of feet above the river. So that means a low-clearance bridge — and it appears the needs of industrial river users were ignored during the planning process. 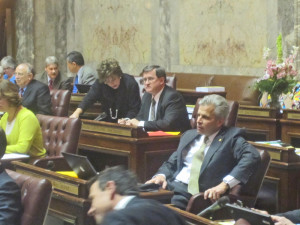 The record shows they raised objections from the start, yet planners maintained they were shocked last year when the Coast Guard balked at a design with 97 feet clearance. The Coast Guard has approval over bridge projects on navigable waterways. A modest modification with 116 feet clearance now is under consideration, but even that design would limit shipping by at least three large private fabrication firms on the Washington side of the river. Senate skeptics note that a low bridge also would restrict industrial opportunities well beyond the Vancouver area to the entire length of the Columbia and Snake River system — all the way to Lewiston and Clarkston. Opponents point out that funding schemes so far haven’t offered compensation to upriver industry for lost business or for relocation. One firm alone might face as much as $400 million in relocation costs, Benton says. “We’d be trading 4,000 permanent jobs for 1,700 temporary ones,” he says.

State Sen. Ann Rivers, R-La Center, says planners failed to consider alternatives – like upgrading the existing bridge or building a new one at a different location. “It was as if they started with a conclusion and worked their way backwards,” she says.

House Transportation Chairwoman Judy Clibborn, D-Mercer Island, argues that it would cost less to pay industrial users to relocate than it would to redesign the bridge. By some reckonings, some $180 million has been spent on the planning process so far. Objections seem to be coming at the 11th hour, she said during debate on the budget Tuesday. “One of the things that happens when it takes 17 years to come to a decision is that the people who were there at the beginning aren’t around anymore, and they don’t remember that there was a process that went on [as] people sat around a table and decided what they were going to build.”

The House debate Tuesday may not have changed things a whit, but it introduced lawmakers to an argument that may have seemed a bit foreign north of the Clark County line. An amendment to the transportation budget offered by state Rep. Liz Pike, R-Camas, would have required the state to start over with its plans, and would have prohibited any more spending on the current design. That amendment failed 42-53.

Pike noted that the existing span is in no imminent danger of collapse in an earthquake, citing an Oregon Department of Transportation study, and said the bridge might last another 50 years with proper maintenance and retrofits, at a fraction of the cost. She said, “Light rail is not really a transportation solution; it is a political ideology, and the fact is that we want to spend $1 billion on something that is going to move less than 3 percent of the commuters.” Though the bridge would gain additional lanes, the fact that bridge approaches would not be widened on either side of the river would mean continued traffic congestion.

Sharon Wylie, D-Vancouver, offered a counter-argument based on process: If the state goes back to the drawing board, it would have to get back in line for federal funding, and might lose the more than $1 billion the feds have offered. Meanwhile she said it isn’t right for the Legislature to second-guess the officials who made the decisions locally. “I didn’t sit in on every meeting but some of the same people that are objecting were there,” she said. “The people that made a decision for this design are people that listened to everybody, including some of the people that are objecting today. Now is the time to move forward.”