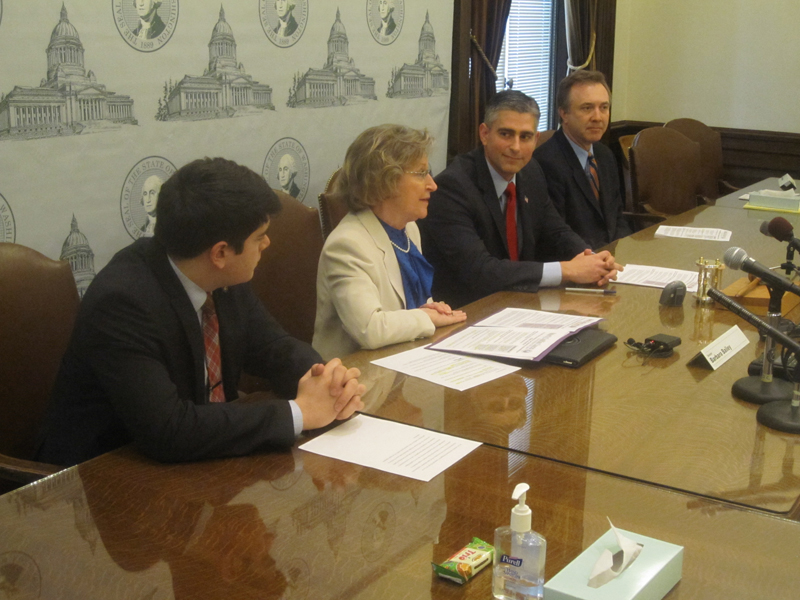 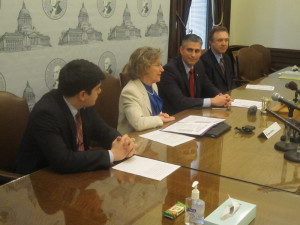 OLYMPIA, March 20.—The Senate Majority Coalition rolled out a $300 million plan Tuesday that would partially reverse years of cuts in spending on colleges and universities and hold the line on fast-rising college tuition – but already the signs of conflict are apparent.

The Senate majority plan would tell the schools how to spend a big chunk of that money – on students rather than administration. It includes a 3 percent tuition cut over the next two years and more money for financial aid, and it would launch a program that would reward schools based on their progress in meeting student needs. If the Legislature spends more money on colleges and universities, members of the Republican-dominated caucus say  they ought to make sure a big share goes toward students. And thus the Senate Majority stakes out its position on what has become a high-profile issue this session after years of not-so-benign neglect.

Tuition at state schools has been allowed to double over the last eight years, during good times and bad, because previous Legislatures have cut allocations for higher education by a whopping 43 percent. Tuition has reached a crippling $11,000 at the University of Washington – more than $12,000 when student fees are added in – essentially imposing a hidden tax increase on college-bound students and their parents. And this year, even as lawmakers grapple with yet another difficult budget, there’s plenty of talk on both sides about spending on the state’s colleges and universities.

But first things first. “I don’t want to put more money into higher education only to have it all go to faculty salary increases,” explained state Sen. Michael Baumgartner, R-Spokane. Baumgartner is sponsor of the policy bill that enacts the Senate majority’s plan.

The coalition proposal increases higher education spending by roughly 10 percent, from the current $2.7 billion to $3 billion. Where that $300 million will come from, no one knows – that’s a matter for budget-writers to consider in the weeks ahead. The key thing is that Senate Democrats early in this year’s session proposed an even bigger increase in higher education spending, enough to cover both school overhead costs and keep tuition increases at zero. Like the largely Republican Senate majority, the Democratic Caucus also did not name a funding source. But the general idea was that some sort of tax increase would be required. The Senate Majority Coalition says it can do the job without new taxes.

Sen. David Frockt, D-Seattle, said the Dems are waiting to see the final budget proposal. “We are not sure whether their numbers add up,” he said. “We need to flesh out the details.”

The new Senate proposal offers a preview of a small part of the budget plan the Majority Coalition Caucus is expected to produce sometime next week. Debate over tuition and higher education funding will be a central element of the budget wrangle that begins today when a new tax-revenue forecast is released. The House Democrats will follow with their own plan, probably the first week of April.

Of the $300 million the Senate coalition proposes spending on education, much of it is spoken for by the tuition cut and an expansion of the state need grant program by 4,600 students. Of the remainder, some $50 million would be allocated through a program rewarding schools for performance in meeting student-centric goals, including low drop-out rates and the production of science, technology, engineering, and math degrees. The Senate majority also would essentially gut a law passed by the Legislature in 2011, which gives schools the ability to raise their own tuition in excess of state-authorized levels. Schools still could set their tuition, but they couldn’t do it faster than inflation – meaning no whopping increases like the 20 percent hike adopted by the UW in the 2011-2012 school year.

It’s a quid pro quo, said state Sen. Doug Ericksen, R-Ferndale. If the Legislature is going to start plowing money back into higher education again, lawmakers ought to resume some control over tuition. “Now that the state is going to increase its commitment to higher education with a 10 percent increase in general fund spending, I believe personally that a portion of that should go to students to try and curtail the tuition increases they have seen over the past eight years. That is what we are really trying to get at here.”

If it sounds like there’s a bit of mistrust involved, it might be laid at the doorstep of Western Washington University, which last year raised tuition 10 percent – and then awarded salary increases to its faculty, over howls from then-Gov. Christine Gregoire and the Legislature. But nothing prevented it from doing so.

Nothing in the Senate majority plan would prevent the schools from using new money to raise salaries, either – and because most held back during the last four years of retrenchment, there is plenty of pressure to do so. But it’s a long way from what the colleges and universities had been hoping for, said Margaret Shepherd, director of state relations for the University of Washington. If schools enact the salary increases they have been contemplating this year and pay other costs of maintaining current programs, there really is only $75 million in new money, she said – and that would be absorbed by the tuition reduction. So the way the schools count it, the proposal represents no net gain.

“We’re glad we’re not having a conversation about cuts, but it is not a significant new investment,” she said.

The schools came to the Legislature this year with a proposal to fund the full “maintenance level” and add another $225 million on top of that. The schools’ umbrella organization, the Council of Presidents, said that level of funding would allow them keep tuition increases at zero. The Senate Democrats’ plan embraced that idea. The Senate majority proposal essentially tells the schools to think considerably smaller, cut tuition a tad, and figure out the rest on their own.

At a press conference Tuesday, members of the Senate majority said they think the fast-rising tuition costs are the biggest immediate problem in the higher education field – and that of course is less a concern for the schools than it is for students and parents who are forced to take out ever-increasing loans. Right now the average debt for a new graduate is $22,000, said Senate Higher Education Chair Barbara Bailey, R-Oak Harbor. “That is unacceptable,” she said. Some parents are still paying loans by the time their own children are ready for college, she said.

A 10 percent increase in funding is a big boost, said Baumgartner, and schools ought to embrace the idea, even if lawmakers are prescribing where a large portion ought to be spent. He said higher education just doesn’t have the kind of political support that other state programs do, but this year the Senate coalition is willing to make it a cause of its own. “That is why we have to come up boldly, so that it doesn’t get lost in the conversation and lets legislators give lip service to higher education, so that when it comes to actually writing a budget it gets lost in all the other things that Olympia decides to spend money on first.”