Senate proposal puts significantly more money into road construction than a House plan passed earlier this year — but all depends on whether lawmakers can reach agreement on transportation reforms.

The Senate plan nixes tolls on the I-90 floating bridge across Lake Washington, largely finishes the North-South Freeway in Spokane, builds the long-awaited freeway link between Puyallup and the Port of Tacoma, and launches the widening of Interstate 5 at the crowded choke-point at Joint Base Lewis-McChord. It is tied to a series of highway-construction reforms that aim to reduce the cost of road projects statewide and end costly public embarrassments at the state Department of Transportation.

Those are the broad strokes of the Senate proposal that surfaced Monday as representatives of business organizations were briefed. Now the game is on – but there is a long way to go before the largely Republican majority in the Senate reaches an accord with the Democrats in the House. And there is no telling whether a deal will be reached in time for another special legislative session that might be held when lawmakers return to Olympia for a series of committee meetings Nov. 21. If no deal is reached in time, transportation may remain a job for the 2014 Legislative session.

Briefing papers obtained by Washington State Wire indicate that several of the transportation-reform measures sought by the Senate remain a matter of dispute. And an enormous issue that has emerged in the last month has nothing to do with the transportation proposal itself, but rather with Democratic Gov. Jay Inslee’s new effort to promote cap-and-trade legislation and other measures designed to reduce greenhouse-gas emissions. Because the environmental legislation appears likely to boost the cost of fuel, some business interests are calling it a dealbreaker.

Big hitches to be sure, and there is plenty of detail work left to be done. But transportation boosters were cheered as word about the new Senate proposal circulated through the state’s capital city. “You now have essentially a House proposal and a Senate proposal,” said Steve Mullin, president of the Washington Roundtable, the business group that is one of the leading organizations in the Keep Washington Rolling coalition. “Our strong hope is that they will be able to negotiate the differences and get this done by the end of the month.” 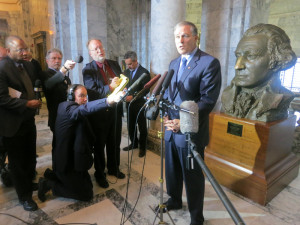 Inslee tells reporters Friday that the Senate has readied a new transportation proposal.

Legislative offices were closed Monday for the Veterans’ Day holiday and little information was available beyond the rather detailed spreadsheets and briefing papers that were forwarded seemingly all over town. But the proposal appeared to be what Gov. Inslee had in mind last Friday when he told reporters that the Senate Majority Coalition Caucus had presented a new transportation proposal during a closed-door meeting in his office. “We have movement on transportation for the first time,” he said.

It doesn’t mean an agreement is here. Senate leaders say they won’t budge unless Inslee and the House Democrats agree to major reform measures. “It is only a breakthrough if he has agreed to reforms,” Senate Republican Leader Mark Schoesler said after the meeting.

On the other hand it might be said that a transportation deal has suddenly become thinkable. For the last four months it has been the Senate’s move as the upper chamber has moved slowly and methodically toward a proposal. The Democrat-led House passed a $9.8 billion transportation proposal of its own two days before the end of the last legislative session, albeit with lukewarm support. But the Senate balked at a controversial bridge project at Vancouver and insisted that big changes in the management of road projects were required. Inslee has been sniping at the Senate majority ever since, at one point blaming the failure to pass a transportation package on “right-wing ideology,” and he raised the issue anew last week as lawmakers held a special legislative session to pass Boeing related legislation.

Inslee declared a week ago that Boeing demanded passage of a gas-tax increase if it was to build its next-generation 777X airliner in Washington. The claim has since been debunked; Boeing has said its decision hinges instead on passage of a new labor contract by the Machinists’ Union, and the governor’s tactic has been widely perceived at the statehouse as a major misstep. 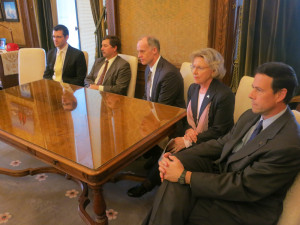 Leaders of the Majority Coalition Caucus meet with reporters Saturday. Asked when the Senate’s transportation proposal might emerge, Senate Majority Leader Rodney Tom, center, says, ‘You won’t have to wait much longer.’

The Senate has resisted the pressure to move quickly – said Schoesler, “it’s more important to get it right.” It convened hearings in ten cities across the state in September and October and heard testimony from 650 people. Senate leaders say any proposal has to withstand public scrutiny after well-publicized goofs at the state Department of Transportation, like the cracked pontoons on the 520 bridge project that will cost $80 million to fix. One way or another the public will wind up voting on the plan, argues Senate Majority Leader Rodney Tom, D-Medina, whether the Legislature refers it directly to the ballot or opponents gather signatures for a rollback referendum. “The most important thing we can do is to design a package that not only passes here in Olympia but also adds the value and the reforms, so that when it comes up for a public vote, the public also is going to give us the affirmative.”

Briefing papers that circulated Monday indicate that two big fiscal reforms remain in dispute. The Senate would eliminate the sales tax on construction materials for state road projects. The practice essentially shunts gas-tax money into the state general fund, allowing money to be spent for any purpose. The Senate also would require that stormwater-runoff projects be funded by the state’s hazardous-substance tax, rather than by gas-tax money. Those two changes would free up $1 billion for road construction.

The briefing papers indicate that House and Senate have already reached agreement on other reform measures, including streamlining environmental reviews, “right-sizing” projects to rein in mitigation costs, and requiring the Department of Transportation to report to the Legislature about costly engineering errors. House and Senate have agreed to new rules for union prevailing-wage surveys and would eliminate apprenticeship requirements for road projects costing less than $5 million – the current threshold is $2 million. Other smaller-scale management reforms remain a matter of negotiation.

Under the Senate proposal, the state’s current 37.5-cent-a-gallon fuel tax would increase four cents on July 1, 2014, another four cents on July 1, 2015, and 3.5 cents on July 1, 2016. That would raise $4 billion over 10 years, with another $4 billion to be raised by truck-weight fees, passenger-weight fees and other measures. Bonds against future revenues would raise another $4.2 billion. All told, the Senate proposal raises $2.5 billion more than the House plan. But it frees up another $1.4 billion by eliminating the sales tax and stormwater expenses, and by reprogramming money that had been earmarked for the now-cancelled Columbia River Crossing at Vancouver.

The Senate plugs that money back into road construction. Unlike the House proposal, it would use gas-tax money to finish the job at the Highway 520 bridge on Lake Washington, rather than by imposing tolls on the nearby I-90 floating bridge. The Senate would allocate $1.3 billion for that purpose.

Other big differences with the House plan include completion of the North-South Freeway in Spokane – the Senate plan would finish the southern link to I-90, though it would not pay for all the projected interchanges. It would finish Highway 167 between Puyallup and Tacoma as a four-lane freeway, and it would double state spending to widen I-5 at Lewis-McChord to $350 million.

Like the House, the Senate also would permit local tax increases for transit purposes, an issue primarily of importance in the urban Puget Sound area.

While big differences remain to be resolved between the House and Senate, an even bigger problem is posed by Inslee’s new push for greenhouse-gas legislation. Last month the governor said he would seek a cap-and-trade program, which would impose new costs on oil refiners that would be reflected in the price of motor fuel. And he followed it up by signing a pact with California, Oregon and British Columbia in which he promised the state’s support for cap-and-trade, carbon taxes and low-carbon fuel standards – all likely to boost the cost of gasoline and diesel fuel. Inslee’s position has thrown a chill into some of the very groups that are among the biggest supporters of a transportation package.

Larry Pursley of the Washington Trucking Associations sent a letter of warning to the Legislature last week, declaring that his group might be forced to withdraw its support for a fuel-tax increase unless there is an assurance that the greenhouse-gas proposals are off the table. The day Inslee signed the multi-state agreement, Pursley said angry truckers began flooding his office with phone calls. “We understand the importance of investing in infrastructure, but quite honestly cap-and-trade and a carbon tax are straws that break the camel’s back.”

Inslee’s push for greenhouse-gas legislation could well derail the chances of a transportation package, said Mike Ennis of the Association of Washington Business. “On the one hand the business community is supporting a transportation package, and you have the governor on the other talking about climate-change legislation, which is also going to increase transportation taxes and fees significantly. We are not going to support both. It is a very big risk. We share Pursley’s position on that, and he is 100 percent right.”