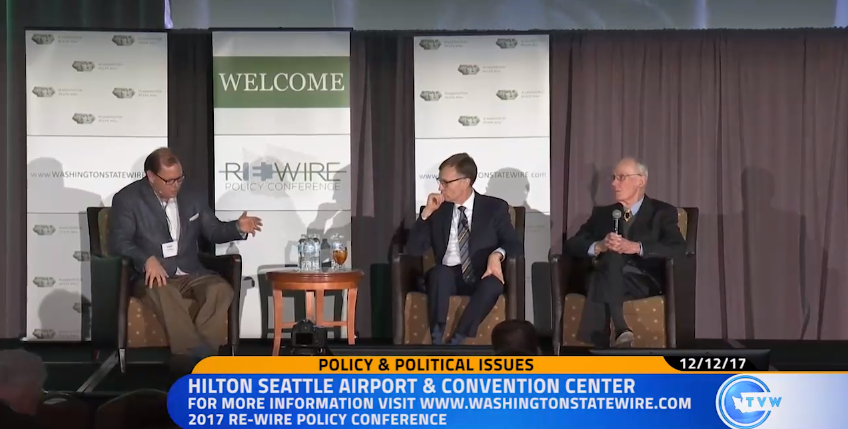 At our first annual Re-Wire Policy Conference, we had the opportunity to sit down and speak with Senator Slade Gorton and former Washington Attorney General Rob McKenna about the current state of politics on both a national and state level. Near the end of our discussion we had an eye-opening conversation about impeachment.

Sen. Gorton, who split his vote on Clinton’s two articles of impeachment in 1999, spoke about the gravity of impeachment, while also implying that it soon may be a realistic road to take.

“It’s a very, very serious question because a conviction of the president of impeachment is to reverse the verdict of the voters of the people of the United States in an election for president. And it cannot, and should not be done frivolously. It shouldn’t be done just over a difference of opinion on particular issues; it’s got to be more profound than that. But I believe the case may very well be there at the present time…In fact, Alexander Hamilton, in one of the Federalist Papers, he almost could have been speaking about Trump, as so misusing the office that impeachment was appropriate.”

“High crimes and misdemeanors in the Constitution of the United States do not require a violation of the criminal code in order to be invoked,” said Sen. Gorton. “The grounds for impeachment are whatever the House and Senate decide they are.”

Rob McKenna joined in the conversation by pointing out that the House and Senate will also have to take into account the fact that many of the allegations against Trump, be it sexual harassment or collusion accusations, took place before the he became president.

“With respect to Trump there are a couple of problems that Senator Gillibrand and others have in demanding that he resign or threatening impeachment if he doesn’t. First, with respect to the sexual harassment claims, they’re talking about behavior and actions that the president allegedly took before he became president. I’m pretty sure that Mr. Hamilton and his colleagues were referring to high crimes and misdemeanors while the president was in office, or at least that is what they envisioned would happen. “

To add further complexity, Sen. Gorton and McKenna stress that when voting on articles of impeachment, Congress needs to not only vote “guilty” or “not guilty,” but also if the charge is worth removing the president from office.

“An impeachment trial is not a criminal trial in the normal sense by any stretch of the imagination. A member voting on impeachment can know perfectly well that the president did whatever the charge is, but still vote not guilty because it isn’t sufficient to overturn the election…. the fact is that there are two different judgements that members of Congress have to make. Did the president do it? Is it sufficient to overturn an election?”

“It’s like in one vote, you’re voting guilty or not-guilty and on what the sentence should be – keep him on office or take him out of office,” added McKenna.

However, regardless of all of these variables, one thing is clear when it comes to the impeachment process.

“No impeachment trial ever works unless it is bipartisan,” says Gorton. “Never has in the past and it almost certainly won’t in the future.”

You can watch the entire conversation in the video below.