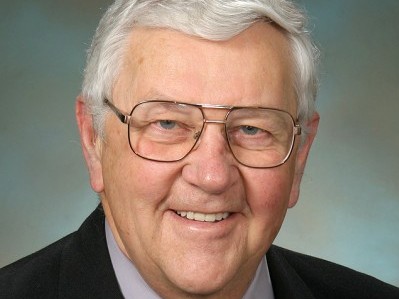 OLYMPIA, Nov. 28.—State Sen. Bob Morton, R-Kettle Falls, says it’s time to hang up his boots and call it a career. Morton announced Wednesday afternoon that he will be resigning Jan. 1, 2013, triggering what promises to be one of the most complicated appointment processes since he landed in the Senate some 18 years ago.

Morton’s successor will be appointed by county commissioners in the sprawling 7th Legislative District, which will certainly be a complicated affair. The 7th District, in the remote and lightly populated northeastern corner of the state, encompasses five counties. Lucky commissioners may have to travel hundreds of miles to cast ballots if they do it in person. Given the state of roads in that section during the winter months, getting there will be half the fun.

Because state law requires appointments to be of the same party, logical successors include the district’s two representatives in the state House, both of whom are Republicans. State Rep. Shelley Short, R-Addy, said she hasn’t decided yet whether to make a bid for the position. “I am open to the idea,” she said. “I have been talking to my constituents back home and obviously my family. I am definitely keeping my options open at this point.”

Also representing the district in the House is state Rep. Joel Kretz, R-Wauconda, newly re-elected to a leadership position in the Republican Caucus, deputy minority leader. Kretz could not immediately be reached by Washington State Wire.

The soft-spoken Morton, 78, was elected to the state House in 1990, where he served until his appointment to the Senate in 1994 to replace former Sen. Scott Barr. He is currently the ranking member on the Senate Natural Resources and Marine Waters Committee, reflecting the 7th District’s interests in the forested public lands that comprise the bulk of the territory.

Morton notified his fellow Republicans that he would be resigning with a quick note Wednesday, saying he would be “opening the door for new leadership in the Senate to take on the responsibility to learn the legislative process and get to know the ‘movers and shakers’ of the state.”

Morton was unreachable Wednesday afternoon as Senate Republicans met to name new leaders. But in a follow-up statement for the press, Morton said, “I thank the people of the 7th Legislative District for the opportunity to represent them. I appreciate their support and insight into how we could make our district and state a better place for future generations. I’d also like to recognize the dedicated support of my legislative assistant, Kim Cusick. Without her help, it wouldn’t have been possible to serve the people of my district in such a way.

“I plan to serve as senator until Jan. 1, 2013. I am looking forward to retirement and spending more time at home with my family in the beautiful 7th District.”

State Republican chairman Kirby Wilbur issued a statement: “I would like to thank Senator Morton for his 22 years of faithful service to both the 7th Legislative District and the State of Washington. He will be greatly missed, however after two decades in Olympia, he has certainly earned the right to relax a bit. The Washington State Republican party will move quickly to ensure a fast and efficient nominating process, so that the 7th Legislative District may have a Senator in place and ready to go before the beginning of the new legislative session. I again thank Senator Morton for the great work he has done on behalf of his constituents, and I wish him all the best in his retirement.”

Short recalled that she was one of the precinct committee officers who participated in the voting process that advanced Morton to the Senate. Under the state’s appointment procedures, county party central committees via the state party will forward three names to commissioners, who will make the final choice. The appointee will have to stand for a special election in fall for the final year of Morton’s unexpired term.

“He has been just such a tremendous advocate for the 7th District,” Short said. “I wish he wasn’t leaving, only for very selfish reasons. He has done a very wonderful job and he has just been a great senator. So he will be missed. I’ve learned a lot from him over the years.”

Longtime Legislature-watchers may remember that Morton is the one who gave Congresswoman Cathy McMorris Rodgers her start. She was Morton’s legislative assistant in the House and took his place on the floor when Morton moved to the Senate in 1994. At the time Rodgers was the youngest member of the state House. She was elected to Congress from Eastern Washington’s 5th District in 2004.