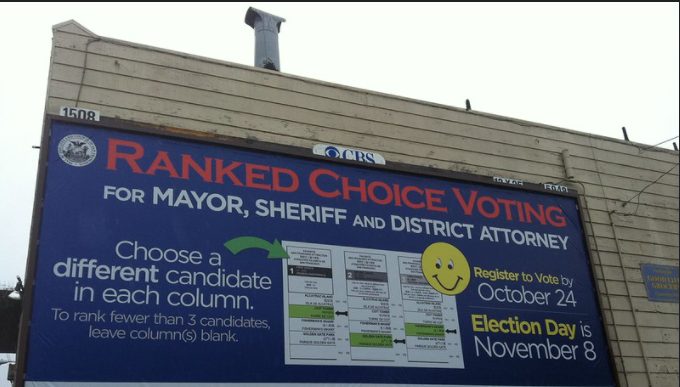 Under a ranked choice voting system, voters may rank multiple candidates in order of preference. For single-winner elections, votes are tabulated using a method called instant runoff voting. After voters’ first-choice votes are tabulated, the candidate with the lowest number of votes is eliminated. Subsequently, votes for the eliminated candidate are transferred to the next ranked candidate on those ballots. Votes are retallied, and the process continues until one candidate reaches a winning threshold.

House Bill 1156 encourages entirely new methods to be adopted in an unknown number of jurisdictions from school board members, city council members, port districts and the like. These are unpredictably spread throughout the state, sometimes in overlapping counties.”

According to a legislative summary of the bill, here are a few the main provisions.

Jennings says the number of local jurisdictions and potential outcomes of elections within each will lead to voter confusion.

There are 1,086 eligible jurisdictions, so the number of possible permutations seems nearly infinite, Considering the potential number of variations, you may share our concern regarding voter confusion. As proposed, each of the governing bodies and jurisdictions could choose a new and slightly different method for casting ballots, and a new and slightly different algorithm to determine the outcome of an election. And all of this is to be presented on one ballot.”

Jennings and another testifier also lamented what they say is a high cost burden – up to $8.2 million for the Secretary of State’s Office. But Sharon Hanek, a testifier from Pierce County, said the bill’s fiscal note leaves out the costs for counties, which she says could involve upgrading or buying new tabulation machines, as well as increased labor costs associated with potential audits.

In 2006, Pierce County voted to implement ranked choice voting. But three years later, after the 2008 election, voters repealed the system. Some voters reportedly felt that it helped elect an unqualified assessor-treasurer.

Rather than being forced to choose what sometimes feels like the lesser of two evils, I could give voice to my priorities. I could better represent my concerns using this method. And voters feel more engaged is priceless. It’s always a good thing. It’ll increase voter turnout and decrease voter cynicism,” said Brewster.

Another testifier, Kelsey Breseman, said the current voting system allows for discussions of policy in elections to be crowded out by concerns over “electability.”

Under our current system, it is considered hopelessly naive to use your conscience when exercising one of your primary civic duties. Having and using personal values is subsumed by this no-win game which is played at all levels of government. As a voter, instead of voting to represent your stances on issues, our current system requires folks to engage in guessing games redirecting critical conversations about issues and policy to endless discussions of who or what is electable. Do you feel manipulated? Because I do,” said Breseman.

Supports say a reform like ranked choice voting meets the moment at hand for American democracy.

With ranked choice voting we have a chance to let citizens vote in ways that would represent their true values and stances,” said Breseman. “You can list your actual preferences instead of picking between two people you would not like to see hold office or ‘throwing away your vote.’ This is critical to a restoration of trust in what is now a very beaten down America.”

On Thursday, the House Appropriations Committee moved the bill out of executive session in a bipartisan, 22-11 vote.

According to a news release from FairVote Washington, the cities of Olympia, Bellingham, Gold Bar, Spokane, and Seattle have each declared support for HB 1156.