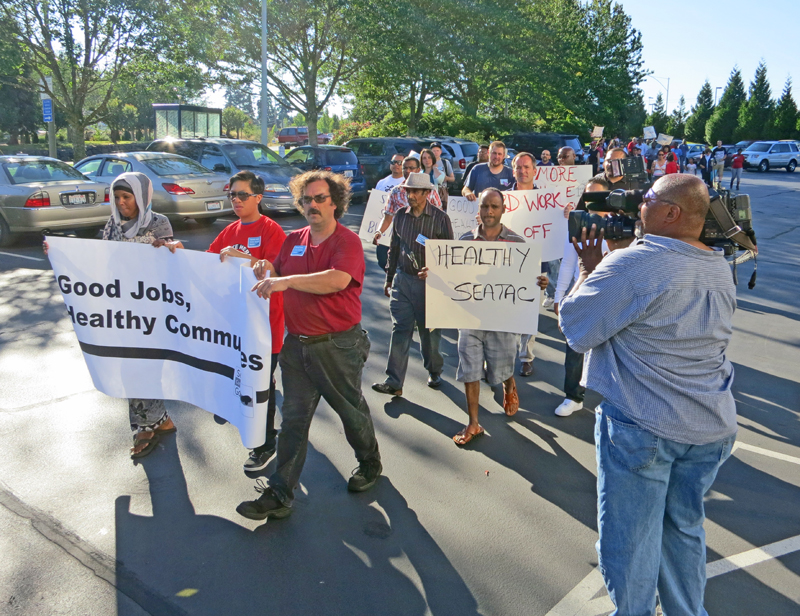 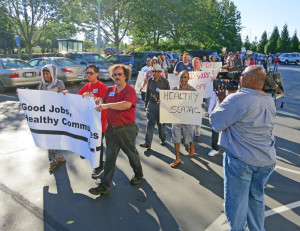 Here it comes! A national campaign for a big increase in the minimum wage establishes a beachhead in the city of SeaTac.

SEATAC, July 24.—A local ballot measure that would impose a $15-an-hour minimum wage on Sea-Tac International Airport and surrounding businesses is headed for the November ballot, placing this small King County city on the front line of a national campaign that is being mounted by organized labor.

The SeaTac City Council voted unanimously Tuesday night to place the “Good Jobs SeaTac” initiative on the Nov. 5 general election ballot. The decision was a formality after the campaign squeaked through a city signature-check this week. Organizers needed 1,566 signatures, and even though they turned in nearly a thousand more than required, challenges from opponents disqualified an unusually large number and the campaign was left with just 43 to spare. The relatively small number of signatures involved belies the significance of the campaign, which would give SeaTac the nation’s highest minimum wage and would impose other workplace standards on airlines, airport concessionaires, hotels, parking-lot operators and other airport-related businesses. Thus an electorate of roughly 10,000 could set the rules for an enormous enterprise that was worth $13.2 billion in 2007, according to an airport-sponsored economic study. 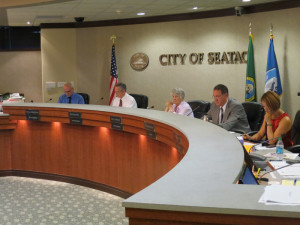 After nearly two hours of testimony from airport workers, labor campaigners and frightened hotel operators, it was clear that the issue has divided this city of 27,000. Deputy Mayor Mia Gregerson, who has publicly urged a labor-standards ordinance after winning election in 2011 with significant union support, said, “Today we heard a confrontation between two classes of people – the people of gold and the people of despair. I think our role is clear, and that is to let the people of SeaTac speak with the power of their vote.”

Other, rather less enthusiastic councilmembers observed that the law gave them just two choices. They could advance the measure to the ballot or enact it into law on their own – and they weren’t about to do the latter. A lawsuit to block the initiative has been filed by SeaTac-based Alaska Airlines, the Washington State Restaurant Association and an airport restaurant operator, but a motion for an injunction was denied last week in King County Superior Court on the ground that the measure had not yet been certified for the ballot. Attorney Cecilia Cordova, representing concessionaire Filo Foods, said Tuesday night that plaintiffs have not decided whether to renew their challenge before the election, or to wait until after the vote. Among other things, the suit contends the initiative runs afoul of the state’s single-subject rule for ballot measures and federal labor laws regarding common carriers. “There are going to be a lot of legal challenges,” she said.

At Forefront of National Effort

The SeaTac initiative is on the leading edge of a national union-backed “living wage” campaign that is being battled one city at a time. Labor unions are staging rallies and demonstrations today to mark the four-year anniversary of the last increase in the federal minimum wage; the effort attracted national attention this month with the decision of the Washington, D.C. City Council to require large retailers to pay a 50 percent premium over the federal minimum wage. The decision prompted Wal-Mart to threaten cancellation of plans for three stores. A $15 minimum wage is a major issue in a Los Angeles mayoral campaign, and in Seattle, where embattled Mayor Mike McGinn faces a tough campaign for re-election, he is threatening to hold up a Whole Foods supermarket because he maintains the grocery chain doesn’t pay enough. Wrapped into the controversy is the parallel issue of mandatory paid sick leave – Seattle passed an ordinance with support from the same quarters last year, and a new campaign is under way in Tacoma.

The SeaTac initiative encompasses those issues and then some. The measure is backed by a coalition headed by Working Washington, an organizing arm of the Service Employees International Union. In Washington state it is a rather singular issue — the state minimum wage already is the highest in the country at $9.19 an hour; the initiative imposes a 63 percent premium. The initiative also imposes a mandatory sick-leave requirement, and it would establish “successor employer” rules requiring businesses to rehire employees when a business is taken over by a new owner, or when an old concession contract is replaced by a new one. The latter point has been an issue of some controversy since 2005, when Alaska Airlines replaced 500 baggage handlers with a new contract operation. Unions have pressed for a successor-employer bill in the Legislature, but have not been successful. 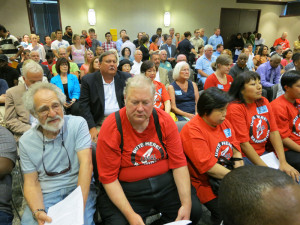 Hot, sweaty audience fills every seat and spills into the hallways.

In the city of SeaTac, it all seems to be in voters’ hands now – and given the relatively small number of voters who reside within the city limits, it appears that the battle will come door-to-door, on a far more personal level than the typical political campaign. A relative handful of SeaTac residents will make a decision that affects a much broader enterprise because the airport is a magnet for workers who live throughout south King County and northern Pierce. Airport officials estimate that 20,000 are employed at the terminal, including 16,000 badged employees and 4,000 more who work as taxi drivers, rental-car workers, shuttle drivers and others. That doesn’t include those who work at the nearby hotels along the Highway 99 strip.

Puget Sound Sage, a non-profit organization that has provided statistical support for the effort, estimates that the measure will affect 6,100 workers, boosting wages by an average $533 a month. That’s good news for the local economy, said policy analyst Nicole Keenan. “When workers spend their money on local businesses, those business owners and employees now have more money to spend themselves. In turn, they will re-spend part of the wages increased by this initiative on other businesses – this is called a ripple or multiplier effect.”

Sage uses the airport’s own studies to make the point: Using those same 2007 figures, the latest available, airport consultants estimated that every dollar in wages becomes $1.45 in the local economy. Thus $39 million in increased wages becomes $57 million as it is spent and respent. Keenan stated that most workers who will be affected are employed by multinational corporations, which presumably can absorb the additional cost. 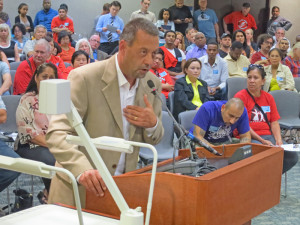 Opponents say it’s not that simple, and for every multinational you’ll find small-business owners struggling for profitability. Increase costs for employers and the money has to come from somewhere – and they say they can reach only so far into travelers’ pockets. Labor costs become the obvious target. Because the initiative applies to hotels with 100 or more rooms, some hotel operators may decrease the number of rooms they operate. Many predict restaurant closures and layoffs and say certainly there won’t be new investment in the community. Scott Ostrander, general manager of Cedarbrook Lodge, said his operation is no multinational. “I am shaking here tonight because I am going to be forced to lay people off for something that is not their fault, something they have no control over,” he said. “I’m going to take away their livelihood. That hurts. It really, really hurts.

“Many people in the audience – you’ve got tags on that say good jobs make SeaTac better. You’re absolutely right, and that is what I do as a small business employer. I make jobs, I make SeaTac better. Good jobs, decent jobs are better than no jobs. And what I am going to have to do on Jan. 1 is to eliminate jobs, reduce hours – and as soon as hours are reduced, benefits are reduced. I’m also a voter and I live in SeaTac, and I was a proud citizen of SeaTac. A very young city, a city with great promise and opportunity, and this initiative will destroy this community.” 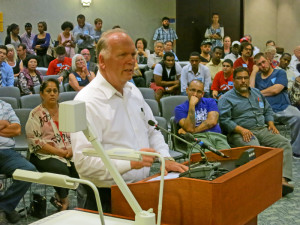 SeaTac business interests have organized an opposition campaign calling itself Common Sense Sea-Tac; lending support is the Southwest King County Chamber of Commerce. Gary Smith of the Independent Business Association told the council there are plenty of people who would love to work for $15 an hour – it’s not as if the wage has anything to do with supply and demand. “This proposal would make an economic island of SeaTac in the state of Washington. You will have the worst place to locate a business in the state of Washington. I don’t think you want to go there.”

Though the council decision was a foregone conclusion, the dozens who trooped to the mike Tuesday night offered a preview of the campaign to come, with their incendiary remarks about rapacious corporations and greedy labor unions. Take Tyler Henderson, of Seattle: “I’m going to ask you, city council, who do you work for? Us, the electorate? Or do you work for big business? It is time to take the fight to the greedy big businesses. It is either that or continue to take on the working class.”

Then came 72-year-old Kathleen Brave of SeaTac, who said she certainly wished her pension and Social Security payments offered her $15 an hour. “Many who were not born in this country and are uneducated and unskilled think they deserve more than I do or my neighbors do. My dad’s family came over on the Mayflower — nobody helped them. I just feel that this goes way too far, and I think in the long run you’re all going to be disappointed when you lose your jobs or get laid off, because all this is going to do is to line the pockets of union workers.”

Said SeaTac Mayor Tony Anderson, “It will come down to what is the will of the voters here.”