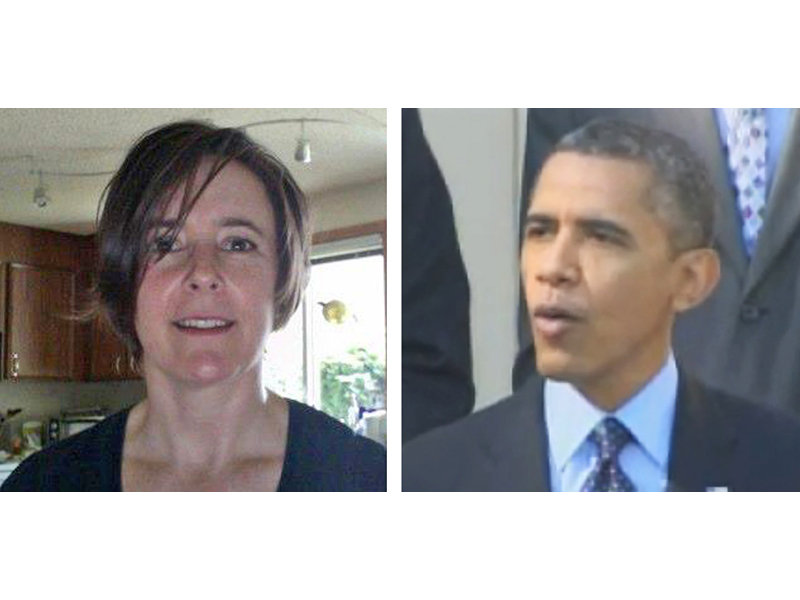 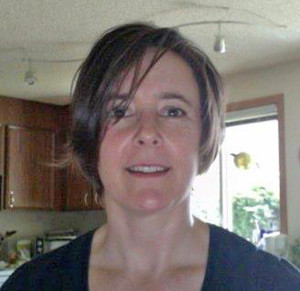 OLYMPIA, Nov. 17.—Jessica Sanford, the Federal Way woman who got a shout-out from President Obama last month with her fan letter for the Affordable Care Act, got a rather rude awakening last week. Turns out she doesn’t qualify for a tax credit after all.

At least that’s what the letter said that she got from the state. Now she says her dream of affordable health insurance has gone poof. She can’t afford it. She’ll have to go without. “I’m really terribly embarrassed,” she says. “It has completely turned around on me. I mean, completely.”

Chalk it up to a bollixed-up state website that apparently still has major problems. Originally it said Sanford and her child would get a whopping tax credit that would reduce their total premium to $169 a month. Now the state is telling her it goofed – twice – and she has to pay full ticket. There may even be a third goof involved: At least one health-insurance broker says she may qualify for a tax credit after all, albeit a small one. Officials at the state Healthplanfinder website could not be contacted Sunday night. But it just goes to show that even in the state of Washington, which has earned national kudos for a health-insurance exchange that seems to function better than the dysfunctional federal website, there are big, big problems.

“They have to own up to what is going on,” Sanford says. “They have to fix it. They can’t just go around and say this is working great. In my opinion they ought to shut it down and just get all of it straightened out.”

Sanford’s tale may not be all that unusual amid the national furor over Obamacare’s sputtering start. But it is particularly embarrassing because the president himself mentioned it in a speech, calling it a success story that makes the case for the program. These days fan letters are few and far between. 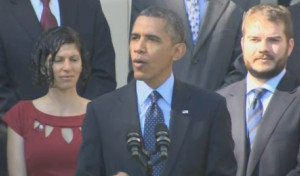 Obama related Sanford’s story in remarks from the Rose Garden last Oct. 21: “I recently received a letter from a woman named Jessica Sanford in Washington state, and here’s what she wrote. ‘I am a single mom, no child support, self-employed, and I haven’t had health insurance for 15 years because it is too expensive. My son has ADHD and requires regular doctor visits, and his meds alone cost $250 a month. I have had an ongoing tendinitis problem due to my line of work that I haven’t had treated. Now, finally, we get to have coverage because of the ACA for $169 a month. I was crying the other day when I signed up. So much stress lifted.’

The president went on: “Now, that is not untypical for a lot of folks like Jessica who have been struggling without health insurance. That is what the Affordable Care Act is all about.”

Sanford’s story might be typical, all right – but not in the way anyone thought, not anyone at the White House, and certainly not Sanford herself.

Yes, Sanford says, it was all true at the time she wrote the letter. She was ecstatic when she discovered she could sign up for a health plan that covered all her needs at a reasonable price. As a freelance court reporter, Sanford, 48, doesn’t make a lot – a little less than $50,000 a year. That doesn’t go very far when there is a child in the household and his father doesn’t pay child support. Her 14-year-old son Ryan requires a special prescription medication that must be compounded. Before the Affordable Care Act came along, she was getting rate quotes of $500 and $600 a month. She just couldn’t afford health insurance, and her health care costs left her strapped.

That’s why she was one of the eager customers who was ready to sign up the moment the state website opened for business on Oct. 1. Washington is one of 14 states that went its own way, building its own site rather than relying on what turned out to be an error-plagued federal system. Although a computer glitch shut down the Washington Healthplanfinder website the first day, by Oct. 3, with the help of a broker, Sanford managed to enroll in a “gold”-level health plan offered by Premera Blue Cross.

The savings were tremendous. Thanks to the tax credit, Sanford qualified for a discount of $452 a month. “I was looking at it, and you know, it was like it was amazing. How was I supposed to know?”

Sanford was so happy that she wrote a thank-you note to President Obama and dropped it in the mail. One of the president’s speechwriters contacted her and asked if he could use her story. When the president used her name she says it was one of the proudest moments of her life. “To think I would finally be covered if anything happened – I was so relieved.”

Then came the bad news.

Four days after President Obama made his address, the state health exchange publicly revealed a grevious error – its tax-credit calculations were all wrong. The state had been submitting monthly income information to the federal data hub, but the federal computers were expecting an annual figure. Suppose a person claimed an income of $50,000 a year — the tax credit was based on an income of $4,166 a year. The higher the income, the bigger the error. Brokers say they caught the mistake right off the bat and tried flagging it to the state’s attention, but for some reason it took the state three weeks to acknowledge it. So everyone who purchased a subsidized health insurance policy through the Washington state exchange prior to Oct. 23 was quoted too low a rate. The mistake involved 4,600 policies covering 8,000 people – Sanford’s policy was one of them.

The state sent a letter saying mistakes were made. And so she went back to her broker and tried again. They went over her income and made a more careful calculation of her business tax write-offs. But this time the website showed she qualified for a much lower tax credit, just $110.

With a gulp, she signed up for a less-expensive “silver” plan from Premera – meaning that it had higher deductibles and copays. Still her premium went up. “I knew I would be struggling in my slow months. I didn’t know how I was going to do it. But honestly, I just wanted to get it in my budget and start working on it right away and start working on saving money toward it – that was all I could do, just work at it and hope for the best and try to take the money from here or there or wherever.”

Sanford had managed to save enough money for half of the first month’s payment when she got another letter from the state last week. It had goofed again. She qualified for no tax credit at all.

The hitch was that the website told her that her income was low enough that she could enroll her son in the state Medicaid program for children of low-income families, known as Apple Health. For that she would have to pay a premium of just $30 a month. She could enroll him right away, and she did. But that created a problem. When she enrolled Ryan in Medicaid, she couldn’t count him toward a tax credit. Not that the website mentioned it. In fact, it gave her the opposite impression.

Once the new health insurance policy kicked in on Jan. 1, the premium was supposed to be $280 a month, plus, she assumed, the Medicaid premium. But after she signed up for a policy, and after she gave her credit-card information, she got a letter from the state last week saying that her income was too high to qualify for subsidies – the cutoff is $44,680 for a single adult, 400 percent of the federal poverty level. So she would get no help from the feds at all.

“I was dumbfounded,” she said. “I thought this was a total mistake, they’re going to correct this — this isn’t true. How could I not qualify for a tax credit? I make under $50,000 a year. There’s got to be something. So I got ahold of my broker, and a couple of days later he called me back, and he told me that no, it was true.”

Now she says her health-insurance dream has gone bust. Without a tax credit she has to consider the cheapest “bronze” level plans, but the deductibles are so high that couldn’t afford to purchase prescription medication. “I was like, forget that – I’m not going to pay.”

So now she is looking forward to no health insurance at all. Under the terms of the Affordable Care Act, she will have to pay a penalty of $95. 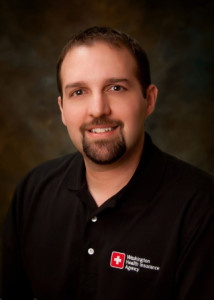 The strange thing about the story is that there may be a third mistake involved, says Tumwater insurance broker Vernon Bonfield. He says Sanford’s son should never have been enrolled in Medicaid in the first place. The Apple Health program is supposed to be offered only to those who make less than 300 percent of the federal poverty level. Sanford makes 316 percent. Yet for some reason, he says the state website seems to be enrolling children in Medicaid who don’t qualify for it. “It could very well be that there is another calculator error – I made them aware of it last week, and they said they would look into it.”

Error or not, it points up another big problem with the state system, Bonfield says – the state website makes it easy to sign up a child for Medicaid, but it doesn’t explain the drastic consequences for the tax-credit calculation, and after a child is enrolled, it doesn’t allow customers to change their minds. And while there is a procedure allowing people to disenroll their children in Medicaid, Bonfield says it is hard enough for brokers to get answers about it – imagine what it must be like for a consumer. “It is just mind-boggling.”

The way the program works is a bit complicated. When households with incomes up to 200 percent of the federal poverty level sign up for health insurance at the state exchange, their children are automatically enrolled in the Medicaid program – there is no choice about it. Those who make between 200 and 250 percent of the federal poverty level can enroll their children with a premium of $20 a month per child, with a maximum of $40. Those who make between 250 percent and 300 percent pay a premium of $30 a month.

Those who make between 200 percent and 300 percent are supposed to be able to opt out of the program. But the process isn’t explained anywhere online, and it wasn’t until last week that Bonfield found someone to explain it to him. Customers have to call the state Health Care Authority’s toll-free number, 1 (855) 623-9357 and ask to have their children disenrolled, wait for a day for the website to update, then go back to the health-exchange website and re-enroll in a qualified health plan.

But Bonfield says he has one customer last week who managed to get through on the phone to the Health Care Authority to disenroll his children — so it must be possible.

No Beef With Obama

Sanford has been trying to flag the state’s attention – she posted a note on the state Healthplanfinder Facebook page Friday, sent letters to every state official she could think of. She has gotten at least one response so far, a public note from the Healthplanfinder staff on its Facebook page that says, “Jessica, we are very sad and disappointed that the tax credit miscalculation affected you so heavily.”

“But to me there is a big problem with the way the state is handling it. It is like a big machine – you put your stuff in there and once you do it, it is impossible to do anything. You can’t get through to them [on the phone], the website is really limited. So you are stuck on this big treadmill of bureaucracy, and you know, it feels very out of control.”