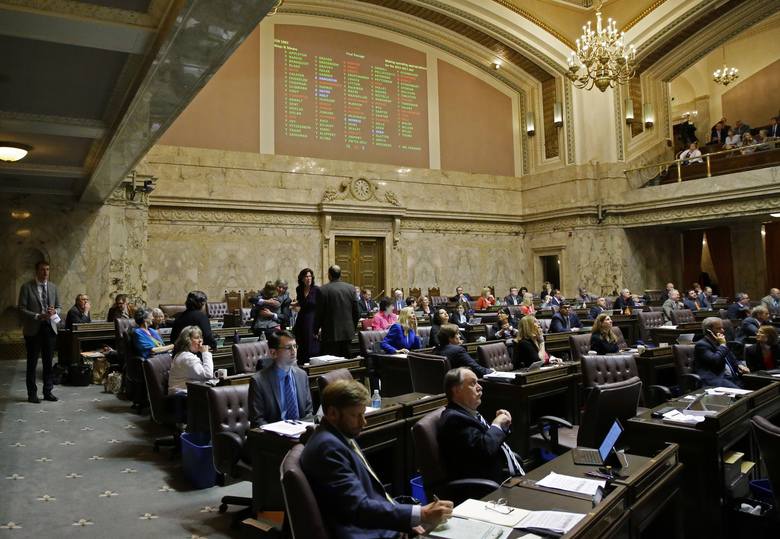 Rhetoric or public statements are often what brings that conflict into light. Those are usually symptoms of the cause of conflict though they can certainly add energy to the conflict itself.

So, it’s worth highlighting how both major parties in Washington State are in open conflict with themselves.

These aren’t quite partisan “civil wars” but they are about as close as you get in Washington State politics.

And, they are playing out as we’d expect: through political organizing and through looming elections.

Among Republicans, the divide mirrors something of the national divide. Washington State Republicans are split between what I’d call Traditional NW Republicans and Trump Republicans.

This is the legacy NW Republican, built locally by Slade Gorton and Joel Pritchard, with Evans, but given national voice in Ronald Reagan.

The Trump Republican is reactionary. It doesn’t draw experience from the long histories of the various elements of Republicanism. In fact, it often rejects those in favor of what appears to gain near term political advantage.

We see this style of Republican in Doug Ericksen, Jesse Young and Clint Didier.

The flash point in the conflict between these two factions is Matt Shea.

We’ve covered this in various ways. From Shea’s political organizing in Eastern Washington around Liberty State to the recent conflict in the House Republican Caucus.

However, the divide over Shea is a symptom of larger conflict within the party, one that, while it roils, diminishes its chances of winning more statewide offices.

The same divide is playing out among Democrats, too. On the left, the split is between what I would term Consensus Democrats and Activist Democrats.

Consensus Democrats come out of a long lineage of winning statewide office. They believe in the old adage that “if you want to go far, go together.” They have their roots in the Scandinavian ethos of Puget Sound, which seeks to foster and strengthen community.

But, in the interest of building community, Consensus Democrats – like their Scandinavian roots – don’t take well to being questioned. They believe their work for the community is self-evident and that by challenging the collective work, it undermines the community as a whole.

This approach, however antagonistic to being challenged on the left, wins elections. Jay Inslee, Jenny Durkan, Bob Ferguson, Andy Billig and Dow Constantine are all Consensus Democrats.

The Activist Democrat isn’t interested in consensus politics. These Democrats want to get to work, want to win, and want to drive policy that will address the ills of the community.

They don’t need to “build” community. They know their communities and the needs of their communities. They need solutions, and they don’t want to wait for consensus from what they see as interest groups that may be slow to change.

These Democrats are folks like Kshama Sawant, Noel Frame, and Pramila Jayapal. They are smart, hard working, and often draw the ire of Consensus Democrats for challenging the status quo.

The flashpoint in this conflict is the looming presidential primary. It will allow for some pressure to be let off so that factions can be given voice without training their ire too directly on one another at the state or local level.

Interestingly, Consensus Democrats tend to focus on state and legislative politics, where they have some structural advantages. Activist Democrats have had more success the closer you get to Seattle, and Seattle city politics.

Some politicos, like Laurie Jinkins, Teresa Mosqueda, Nicole Macri and Rebecca Saldana, have fluency in both camps.

For Democrats, it will take some of that fluency to bring the party back together in 2020 ahead of the General Election, and remain cohesive moving into the next decade.

For Republicans, there is a sense that the divides in the party could last well beyond the next election. If a leader can pull the party back together after 2020, giving voice to a new coalition among Republicans, as Reagan did, that person will be a powerful force in Washington State politics.