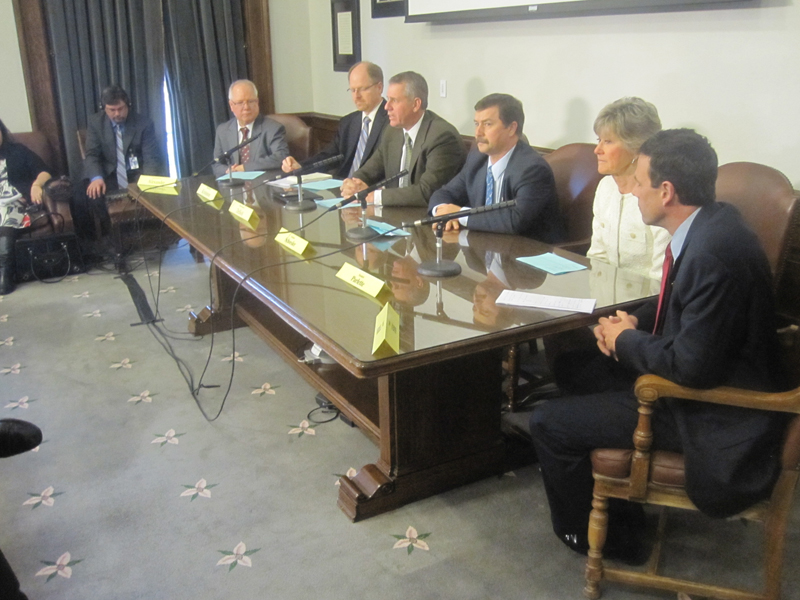 Republicans Promise to Help Keep Inslee on Straight and Narrow 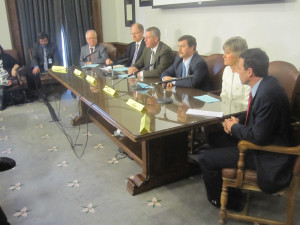 OLYMPIA, Jan. 17.—Republican lawmakers say they want to do their best to help Washington’s new governor – by making sure he’s able to keep that campaign promise of his not to raise taxes. Consider it a subtle dig: At their post-inaugural news conference, legislative Republican leaders made reference to the one campaign promise Gov. Jay Inslee failed to repeat and amplify in his feel-good address.

So they were happy to remind him of it. “Our first priority has been to help the governor keep that pledge,” said Senate Republican Leader Mark Schoesler, R-Ritzville.

The opposition-party response is a tradition that follows the governor’s opening speech of the session – and for the last 28 years in Washington state, much to GOP chagrin, a Republican tradition. Inslee is the 5th Democratic governor in a row, the longest single-party winning streak in the country. This time out, Republicans really didn’t have much fodder – Inslee’s speech was big on inspiration and a little light on the nitty-gritty detail that makes for political combat. So the opposition team was forced to say that yes indeed, they agree that jobs are important, too, that education is a good thing, that the state ought to do something about mental health, and it would be an outstanding idea to reduce violence in society. “There were a lot of nice things said today,” Schoesler said. “It was very short on details. We didn’t get into details on much of anything. That’s unfortunate, because the details are what will drive this process through the next 103 days.”

Really, though, everybody knows what the issues are going to be, Republicans said. Inslee is going to tout some sort of an economic plan, details to be named later, that will put the state’s emphasis on green and high-tech industries. They maintain that it would be better to offer a general economic stimulus that would benefit the economy as a whole. And while their colleagues on the other side of the aisle are focused on spending more money for K-12 education, Republicans say they are more interested in reform – though of course there were plenty of references to reform in Inslee’s speech as well, making the whole thing a bit murky.

“It is kind of a monumental day,” said state Rep. Dan Kristiansen. “We have a changing of the guard, so to speak, in Washington state. With that come some challenges and with that comes some getting to know each other and where we stand on the issues, and at the end of the day I think we all know what the issues are.”

House Minority Leader Richard DeBolt, R-Chehalis, noted that Inslee drew anecdotes from his family’s experience. “He was talking about his family, how his grandfather was a gold-mining engineer when he came to Washington. And when you think about the environmental regulations that we have laid on Washington state today, he would be unemployed and unable to work. And he could have very easily ended that legacy right there.” 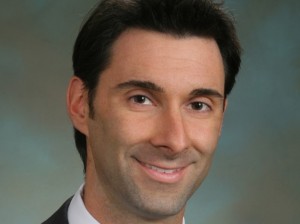 Parker, proving his status as the House Republican master of metaphor, used the Wright Brothers to make a point about government intervention in the economy. The government backed another inventor who, as it turned out, never found a way to fly. It took a couple of bicycle mechanics from Ohio to do the trick, acting alone. And draw what conclusion you can from that. Here’s what Parker had to say in the prepared speech that aired on TVW:

“I’m Kevin Parker, state representative from the 6th District in Eastern Washington. We just had the opportunity to hear Governor Jay Inslee’s inaugural address. We thank him and his family for their commitment to our state.

“Many of us, including Governor Inslee, recently came off the campaign trail where we had the privilege of meeting so many people. During my campaign, I had the opportunity to meet a man named Richard. Richard was not home when I first knocked on his door, but as I turned to leave he appeared – walking up his driveway, in the rain, on his way home from work.

“He told me about how he had been an engineer, making six figures and providing well for his family. But he had been laid off and was now working for minimum wage parking cars. He told me, ‘All I wanted in life was for my children to do better than me, but I never imagined I would be making minimum wage at the age of 65.’

“We, as Republicans, talk about jobs so often because behind the unemployment statistics are individuals like Richard – who need us to take the pursuit of creating jobs in the private sector seriously. The sad truth is too many of our neighbors are out of work or underemployed. Ralph Waldo Emerson once said, ‘If you would lift me up, you must be on higher ground.’

“Our higher ground is a place where we move away from preserving government, to preparing it for the future. The higher ground we seek is about having great expectations in politics again. Great expectations that the middle class will not just benefit from what we do in Olympia, but will thrive in a way we have never seen before.

“A strong economy is the foundation for this higher ground. We must return to the principle that a strong economy makes a strong government, not the other way around. This is how we start: First, there has to be a better understanding from the Legislature that the actions it takes impacts consumers and employers. In these tough times, consumers need confidence and employers need certainty.

“A year or so ago, MSNBC highlighted a poll that said 64 percent of small business owners were not hiring and one of the reasons given was the uncertainty created by government budgets. For the last couple decades, Olympia has muddied the water. No one wants to jump in a pond on a hot summer’s day if the water is muddy and unclear – and neither do employers. They want to know what’s in the water – they want certainty.

“This uncertainty is why, despite having successful companies and a strong agriculture industry, our state’s unemployment rate – at 7.8 percent – has been higher than the national average. It does not have to be this way.

“When we have state policies that embrace entrepreneurship and foster economic development for employers of all shapes and sizes, the middle class will rise again and we will reach this higher ground we seek.

“I have the honor of teaching economics at Whitworth University. My students and I often talk about the upside of a down economy. In the last century, we have experienced 22 recessions. During these limping economies, some of our state’s largest employers emerged: Nordstrom; Swedish Medical Center; Boeing; and the list goes on.

“We must create and foster an environment where old and new companies can innovate and thrive. We must capture the upside to this down economy. We have seen some extraordinary accomplishments in the private sector over the years that have positively impacted our lives and health. As a country, we have always seen America rise to the higher ground through inspiration and innovation – not through government intervention.

“We, as Republicans, know what the ingredients are for a stronger economy. We have listened to your concerns and have heard you.

“As a result, we have sponsored bills that would have privatized workers’ compensation, reformed unemployment insurance, incentivized start-up businesses, and streamlined the permitting process.

“Unfortunately, the majority party has not heeded your advice.

“It’s time to begin a new chapter and get Washington working again.

“When we empower the private sector, we empower employers – who, in turn, hire and empower the middle class, the economically disadvantaged, and the most vulnerable. Second, we understand that budgets are moral documents – meaning they should reflect our priorities. Unfortunately, Olympia has repeatedly passed unsustainable budgets and entered into overtime after overtime – and you have to pay the bill.

“There’s an old adage that goes, “Don’t tell me your priorities. Show me how you spend your money and I will tell you yours.”

“We, as Republicans, have proposed a clear view of the higher ground. Our budgets have set priorities and demanded fiscal responsibility.

“Our recipe is simple: Prioritize education first; support public safety; and protect the most vulnerable – and do all this without raising taxes.

“Taxpayers are already sending us 1.5 billion more dollars than last year. Thankfully, Governor Inslee has promised he will not raise taxes, and we stand shoulder-to shoulder with him on this pledge.

“Third, our state constitution says that education is the state’s “paramount duty.” Republicans believe education should get our first dollar, not our last. This isn’t just a Republican observation; it’s the view of our state Supreme Court. A year ago, the court said the Legislature is not amply funding basic education.

“There’s a simple fix to this problem: A House Republican solution called “Fund Education First.” It would require the Legislature to pass a separate, stand-alone K-12 education budget first – before any other funds are appropriated for state programs.

“When my wife and I plan our monthly budgets, the first payment we make is our house payment – because it’s our most important bill.

“Education is Olympia’s most important bill – and it should be paid first. This is the hope and expectation of students, parents, teachers, and school administrators across our great state.

“Many in the Democratic Party say funding education first will not make a difference. I say, “pass the bill and prove us wrong.”

“As I stated earlier, priorities can be seen in the way someone spends his or her money. Please know this: No matter what you hear in rhetoric, we have the resources to fully fund education. We don’t need to raise taxes to do it.

“In closing, there are a lot of lobbyists and special interest groups in Olympia. But I’ve yet to meet one who represents the taxpayer. That’s because it’s us; we represent you.

“When we reflect back on the legislative session, our hope is that we will have worked across the aisle and, together, stepped up to the higher ground. For us, this will be defined as funding education first, passing sustainable budgets and making sure the most vulnerable have a voice.

“In 1898, the Department of Defense gave renowned physicist and Harvard faculty member Samuel Langley fifty thousand dollars to put America in the air. Newspapers around the nation followed his every move, waiting for him to take flight.

“Meanwhile, two bicycle mechanics named Orville and Wilbur followed their passion in rural Kitty Hawk, while no one paid any attention. It was not unusual for them to crash five times a day, but each time they got up, and tried again, dreaming something great would happen. They deeply believed tomorrow would be better than today.

“That is what government should be about – giving the hope that tomorrow can be better than today for each and every one of us. Our question in Olympia is: Do we fund the Samuel Langleys with government dollars, or do we encourage and foster the innovation and imagination of the overlooked like the Wright Brothers in our state?

“Our country has never been built on the elite. Our greatest accomplishments have been led by empowered people who lived out their curiosity.

“We are an ordinary people who accomplish the extraordinary. Our higher ground is a place where we have a stronger economy, stronger schools and stronger safety nets.

“It’s time to get Washington in the air again. It’s time to believe that something great can happen. And it’s time that we lift each other up to the higher ground.

“Thank you. God bless you, your family and this great state of ours.”