The Model Toxics Control Act (MTCA) was passed by voters in 1988 to generate revenue for toxic cleanups throughout the state. Primarily paid by oil companies, it didn’t generate much revenue at first. But, skyrocketing oil prices turned the fund into a revenue generating machine that has been repeatedly used to shore up the state’s general fund and balance the budget. During a hearing on February 2nd, Senator Doug Ericksen, D-Ferndale, said that transfers to the general fund from MTCA have been made “to the tune of 13%.”

Now, with oil prices at record lows, the fund is yielding lower than projected revenue. “We are facing an unprecedented MTCA shortfall,” said Maia Bellon, Director of the Department of Ecology (DOE), said in a hearing on Tuesday. 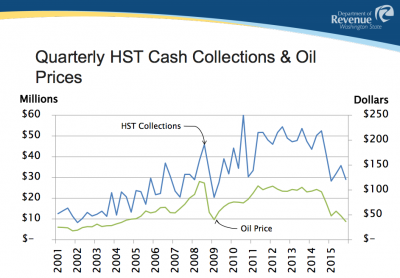 Since the 2015-17 budget was enacted, actual and projected revenue from MTCA differs by $65 million. Toxic cleanup projects are facing a shortfall of $44.3 million. Senate Bill 6570, sponsored by Senator  Ericksen, would “delay MTCA funding to lower priority programs in order to fully fund toxic cleanup.”  In total there are 70 toxic cleanup sites around the state that were slated to be revitalized during the current biennium.

Speaking in opposition to Senator Ericksen’s bill, Bellon said that the bill “seeks to prioritize cleanup at the expense of some stormwater management work we’re doing, air pollution control work, shoreline management  work and other core environmental programs.” She said that the impact of the bill would extend beyond Department of Ecology to counties, cities and ports who rely on pass through funding from MTCA.

Joining in opposition was Darcy Nonemacher, Legislative Director at Washington Environmental Council. In her testimony, she expressed concern about what amounts to “cuts to Department of Ecology.” A growing number of projects have come to depend on the funds.

Previously, in 2013, when the Senate majority caucus wanted to shift $280 million from the account over 12 years into the transportation package for stormwater improvements, WEC argued that gas-tax dollars should pay for stormwater systems and that taking money from the Model Toxics account would reduce funding for the backlog of hazardous-waste cleanup.

This year, the focus seems to be on preserving funding for projects like stormwater and shoreline management through MTCA, with little discussion of what the appropriate prioritization would be in times of scarcity.

In response to comments regarding potential cutbacks at DOE Senator Ericksen said, “I find it difficult that I can have a billion dollar budget and we’re looking at $15 million of operating movement to cover ready to go cleanup projects that somehow every single department within the Department of Ecology is going to be laid to waste.”

The original intent of the Model Toxics Control Act, specified in RCW 70.105D.010 is:”to raise sufficient funds to clean up all hazardous waste sites and to prevent the creation of future hazards due to improper disposal of toxic wastes into the state’s land and waters.”

Still, there seems to be disagreement about the real purpose of the law. Senator Ericksen believes that SB 6570 is about “reprioritizing how we use our MTCA funds to be able to accomplish what many consider to be the prime goal, which is to clean up the toxic areas in Washington State.”

According to Nonemacher, MTCA has three primary purposes: “cleaning up sites, preventing and controlling pollution before it becomes a costly problem, and supporting communities through public participation grants.” Following the hearing, she also said that the 2013 reform of MTCA “added explicit funding purposes like stormwater, oil spill prevention, and other prevention purposes to the different accounts, including the Environmental Legacy and Stewardship Account.”

Others who oppose the bill argue that the line between cleanup and prevention can’t be drawn so clearly.

Given the large backlog throughout the state, it’s clear that the pace of cleanup has lagged. Greg Hanon, lobbyist for the Western States Petroleum Association, made the point that of the $2.3 billion generated by the tax, only 25% of it has gone to cleanup.

It’s All About the Budget

There have been numerous attempts to raise the MTCA tax in order to generate more revenue. Backlash from the oil industry, who bear the brunt of the tax, has been fierce.

Those opposed to SB 6570 say that their focus is on fully funding all of the projects currently served by MTCA either through new revenue or backfill from the state general fund. “We are really focused on the budget the legislature adopts. We’ve been advocating for budget writers to keep MTCA purposes moving forward,” said Darcy Nonemacher after the hearing. 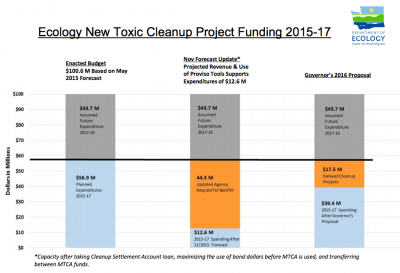 According to Senator John McCoy, D-Tulalip, who voted against the bill in committee, Senator Ericksen also has his eye on the budgetary process. Following the hearing, he said this about Senator Ericksen and the bill: “He wants to get it in front of Ways & Means so they’ll do his dirty work for him.” McCoy claims that the bill is unlikely to pass, but that Ericksen’s goal is to get the concept in front of budget writers in the Senate Ways & Means Committee.

Given the projected budget shortfall in 2017-19 and the urge to get out on time and begin campaigning for reelection, it’s uncertain if a budgetary fix can solve this problem.