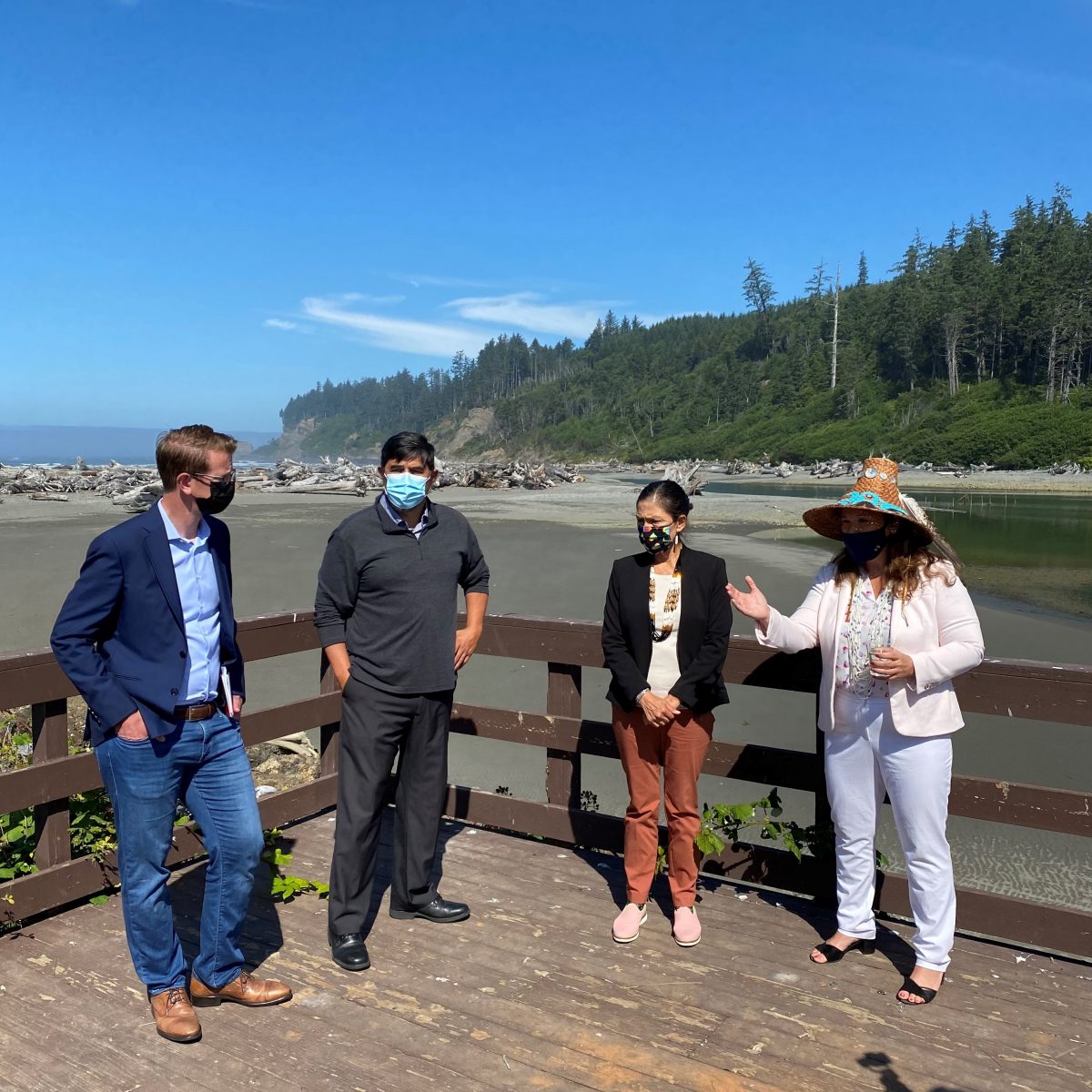 Today, U.S. Representative Derek Kilmer (WA-06) joined U.S. Interior Secretary Deb Haaland in Taholah, Washington, to tour the Quinault Indian Nation’s Taholah Village Relocation project, an effort to move the Taholah Village to higher ground and relocate critical community facilities and housing. The Quinault Indian Nation, along with other coastal tribes in Washington, are facing increased threats from climate change, increased flooding, and the threat of tsunami – and are actively moving to higher ground to protect their people and their way of life.

“Climate change is real and it requires bold action. Our region has seen severe storms and rising sea levels threaten communities,” said Rep. Kilmer. “We’ve seen homes and community centers in Taholah face water damage. We’ve seen the Quileute Tribal School in La Push be in the crosshairs of a rising ocean. We’ve seen coastal challenges threaten public safety, public access, and cultural landmarks for these tribes and others, including the Hoh and Makah Tribes. Each of these communities are working to move to higher ground – and that’s why I’m working to ensure the federal government takes action to provide tribal communities with direct access to much needed resources to enhance their coastal resiliency and keep their people out of harm’s way.”

Kilmer is the lead sponsor of Tribal Coastal Resiliency Act – which provides federal resources to Native American tribes living in coastal areas to support their efforts to mitigate threats caused by climate change and sea level rise. In addition, in July, the U.S. House of Representatives voted to pass new critical funding that has been championed by Rep. Kilmer to support relocation for the Quinault Indian Nation and Quileute Tribe.

During the tribal listening session, tribal leaders from throughout the region spoke to challenges their tribes have faced including declining salmon populations, sea level rise, the fee-to-trust process, and other issues. Several also spoke about the systemic inequities called out by the U.S. Commission on Civil Rights in their report entitled Broken Promises: Continuing Federal Funding Shortfalls for Native Americans.

“The Broken Promises Report reaffirmed what we already know to be true – that the federal government has failed to uphold its treaty and trust responsibilities to Native American communities,” said Rep. Kilmer. “That’s why today’s conversation with Secretary Haaland was so important. I’m grateful that she traveled to our neck of the woods to hear first-hand from tribal leaders about the steps we must take to ensure the federal government steps up and fulfills its treaty and trust responsibilities.”

During her visit, Secretary Haaland highlighted how the Bipartisan Infrastructure Deal – a central pillar of the Build Back Better Agenda – includes unprecedented investments in transition and relocation assistance to support community-led transitions for the most vulnerable Tribal communities.

“As coastal communities face the increasing threat of rising seas, coastal erosion and storm surges, our focus must be on bolstering climate resilience,” said Secretary Haaland. “The investments discussed today are central to the Biden-Harris administration’s all-of-government approach to building more resilient communities and protecting the natural environment.”

The Bipartisan Infrastructure Deal includes a $466 million investment for the Bureau of Indian Affairs, including for transition and relocation assistance to support community-led transitions. The investments include:

·       $250 million for construction, repair, improvement and maintenance of irrigation and power systems, safety of dams, water sanitation and other facilities.

A coalition of federal agencies are working together to address the digital divide in Indian Country. This year, the Interior Department and the Institute of Museum and Library Services are partnering with the U.S. Department of Agriculture’s Rural Development Service and the NTIA for the 2021 National Tribal Broadband Summit, taking place throughout the month of September as a virtual event due to the COVID-19 pandemic.

The Quinault have lived and thrived on the Olympic Peninsula since time immemorial. Their cultural history is rich with heritage as they are among the small number of Americans who can walk the same beaches, paddle the same waters, and hunt the same lands their ancestors did centuries ago.

The Quinault Indian Nation has had models prepared by the Washington Department of Natural Resources that show a potential of tsunami inundation of 40-50 feet in depth in most of the Lower Village of Taholah, well above the elevation of the tallest building in the village. A tsunami event at the Village of Taholah would be catastrophic for the tribe, including a significant loss of life and the destruction of infrastructure, which would compromise Quinault Indian Nation government operations indefinitely. Approximately 650 residents live within the tsunami zone in the Taholah Village and important Quinault social and cultural institutions are located in the tsunami inundation zone and flood prone area. In 2012, the Quinault Indian Nation determined through multiple public processes, including a General Council resolution (a vote taken by the entire Tribe), that enabling the movement of residents, businesses, and institutions from the lower village of Taholah to a new Upper Village Relocation Area was the only solution to the threats posed by the effects of climate change and rising sea levels.