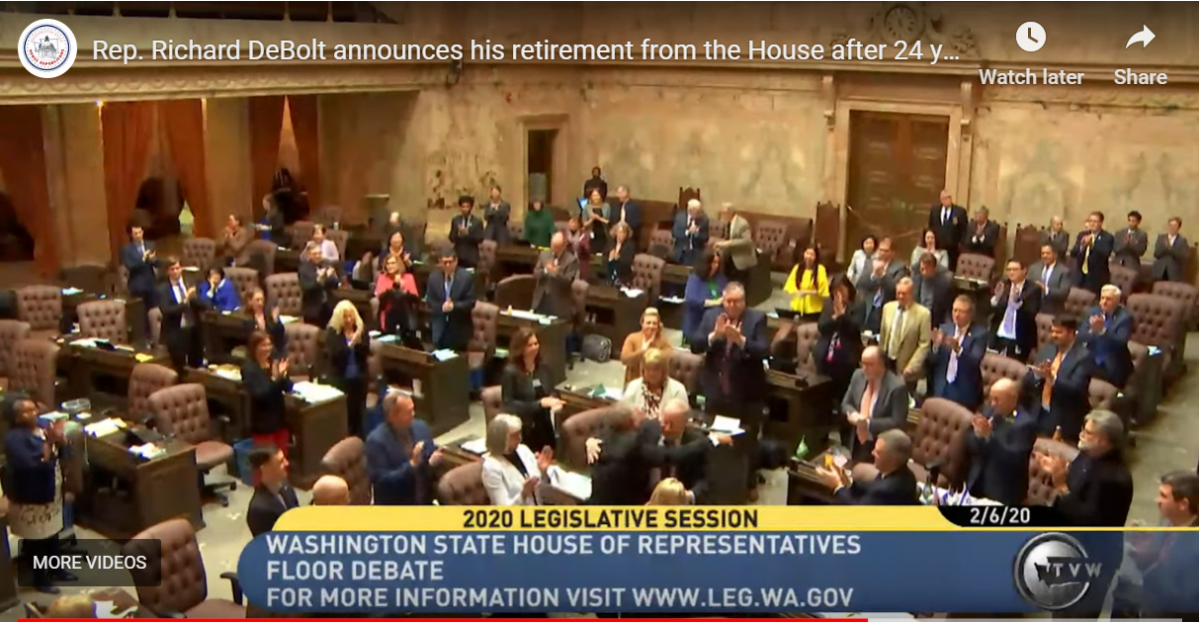 Rep. Debolt reflects on lessons from 24 years in the House

Few legislators have had the career that Representative Richard Debolt has had.

Last week, he announced his retirement from the House after serving 24 years.

His time in office included serving as the leader of the House Republican Caucus where he was known as a sharp tongued pugilist, poking Democrats over all shortcomings, both real and perceived, large and miniscule.

It was a turn time in office that coincided with a health downturn, and a walk away from one of the most important positions among state Republicans.

I started out being a guy handing out flowers instead of throwing bombs, and that suits me and my personality better. ”

I had an extended conversation with Rep. Debolt about his time in office, the changes he has seen in the institution and his observations on both parties.

When I first got to the legislature, I had this name tag on. And, my mentor, Bill Backlund, grabbed it and flicked my name card across the room. He said ‘See how easy that was?’

His point was obviously that this position is temporary.”

When I asked about what was most different about serving today versus serving earlier in his career, he pointed to the big change coming relatively recently from social media.

I’ve noticed it increasing over the last six years. I remember Facebook becoming a place of innovation. When I started, if you saw something in the newspaper or saw it on TV, you thought it was true. We didn’t think that you could put something on FB and it wouldn’t be true. And it got faster and faster with Twitter. And if you didn’t agree with them, then people will cut you out of the communication stream.  It created this instant feedback loop that drove polarization.

I often recite a truism that I’m told Debolt used to share with new members of the House.

The statement went something like “Don’t believe what you see on TV. The other party is not the enemy. The enemy is the Senate.”

I asked him if those words might ever have passed over his lips. His response was a long, full laugh.

Remember, I grew up in the tie. I came into the Majority, but it was close.  The tie was great to the citizens. We didn’t pass a lot of bills.  But, we’d send a D and an R over to the Senate, and we’d have to negotiate with the Senate. It became apparent to me that these chambers are very different.  I think it’s changed a bit today, but you still see that with the Capital Budget. That’s a bi-partisan budget, and you have to get your House votes together to go negotiate with the Senate.

On JT Wilcox’s style as the current House Republican Leader.

JT has a gentle leadership style. He leads with compassion and kindness. He has a certain sense of accountability which I think is good for a leader. He stands up for what he believes in and owns decisions.  He is very pragmatic. He plans out his approach much more than I did. I was much more visceral in my decision making.

Going from caucus leader to a rank and file member of the House Republicans, as Debolt did, is similar to the pathway Rep. Frank Chopp is currently traveling. I asked if Debolt had any insights he might have shared with Chopp as he stepped down from leadership.

There are no lessons that I can give Rep. Chopp. He is a man of his own.

We did chat about stepping down from leadership. He asked me about it and I told him I was happy. I felt like I made a difference for my community. I can focus on problem solving and it’s been great.

But I was never under any guise that Minority Leader was the Speaker. Frank Chopp gave up being the most powerful Speaker in the state. Chopp was the “alpha and the omega” in the state. And he walked away from it.

Frank treated me well. I watch him in committee and he’s taking lots of notes. I think he’s having fun and cruising right along.

He beat me every day at every turn – except for House races, he didn’t beat me there.  Be sure you put that in there.