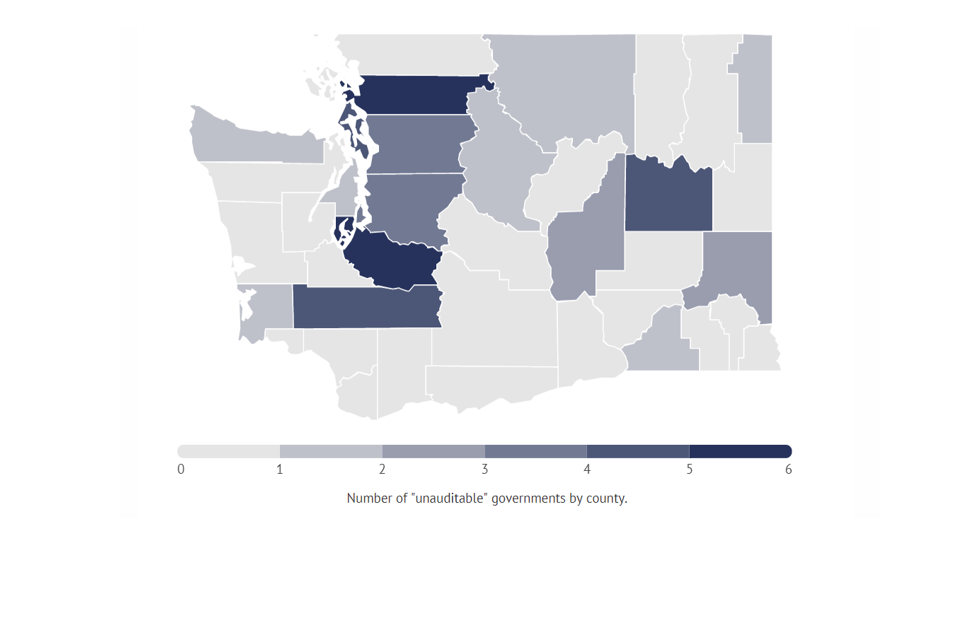 Jason Mercier is the Director of the Center for Government Reform at Washington Policy Center and is based in the Tri-Cities.  He wrote the following commentary on a recent report from the State Auditor’s Office highlighting unauditable governments in Washington.

When we pay taxes, we usually focus our attention on the federal or state government. The reach of the taxman, however, is vast extending all the way down to special taxing districts. In fact, there are more than 1,800 taxing districts in the state of Washington. While most generally work to comply with the transparency and accountability requirements in state law that Washingtonians demand, a few are defiantly refusing to be held accountable. The problem is now so pronounced, the State Auditor has created a separate reporting tool to bring attention to the rogue taxing districts: “Unauditable Government.”

According to the State Auditor:

“State laws require local governments to be audited by our Office and for them to submit annual financial reports, yet every year many governments do not meet these obligations. Failure to be audited and provide annual financial reports keeps the public in the dark about how public money is being used, and impairs the decision making of management and elected officials. By improving transparency and accountability, we increase trust in government.

Each year, the State Auditor’s Office cannot audit over $1 million of public money because of local governments that do not file annual financial reports as state law requires . . . When auditors cannot obtain sufficient information for audit, our Office declares that government ‘unauditable’ and issues a report to notify the public. However, this only passes the issue down the road. Our Office hopes this transparency creates accountability that will persuade the government to file in the future.”

Several of these “unauditable” special taxing districts have started to receive the public scrutiny they deserve. As reported by KING 5:

“What Pierce County Drainage District No. 23 is doing with the $180,000 in taxes it collects yearly from about a thousand property owners in Fife is uncertain.

The three elected commissioners who run the decades-old storm water drainage system have refused to provide the district’s financial records – as required by law – to the Washington State Auditor’s Office.

Pierce County Drainage District No. 23 was last audited 16 years ago.

It’s one of 10 governments in Washington that has not been audited since 2003, according to a recent state report. That same report says an average of 130 governments miss their deadlines to submit financial records every year.

The lack of action by other government agencies to enforce the auditing rules raises more questions about the accountability of the patchwork of ‘special purpose districts’ in Washington . . .

In April, the KING 5 Investigators showed what can happen when one of those governments goes unchecked. The longtime commissioner of King County Drainage District No. 5 allegedly diverted more than $400,000 in taxpayer money to his private bank account. The story also showed that commissioner Allan ‘Ben’ Thomas has not been on a ballot since 1986, thanks to a state law that allows the district to bypass a public election if a commissioner is running unopposed.”

As you can imagine, this blatant disregard for transparency and accountability has caught the attention of state lawmakers. Highlighting the KING 5 story, Sen. Carlyle tweeted today:

“We continue to research and draft legislation for 2020.”

Perhaps one of the changes lawmakers should make is to remove the taxing authority for any entity that refuses to cooperate with the State Auditor. Another possible reform would be to help shine more light on the numerous taxing districts so that taxpayers better understand who is taxing them and why.

Lawmakers attempt to provide this type of transparency in 2018, but the Governor vetoed a budget proviso that would have created an online searchable tax database where citizens could find their state and local tax rates (such as property and sales taxes) by entering a zip code, street address, or by clicking on a map showing individual taxing district boundaries. An online calculator would have also been provided for educational purposes, to allow individuals and business owners to estimate their total tax burden and which officials are responsible for imposing it on them.

A bipartisan bill (SB 5631: Concerning transparency in state and local taxation) was again introduced during the 2019 session to create an online searchable database of all the state’s taxing districts but it did not receive a public hearing.

To help improve the transparency and accountability of state and local taxation it is our hope lawmakers will act next session on this bipartisan proposal to create an online searchable database of all tax districts and tax rates in the state. Lawmakers should also make clear that if you refuse to cooperate with the people’s elected State Auditor you will lose your grant of taxing authority. The privilege to tax comes with the requirement to be transparent and accountable to the sovereigns of the state.