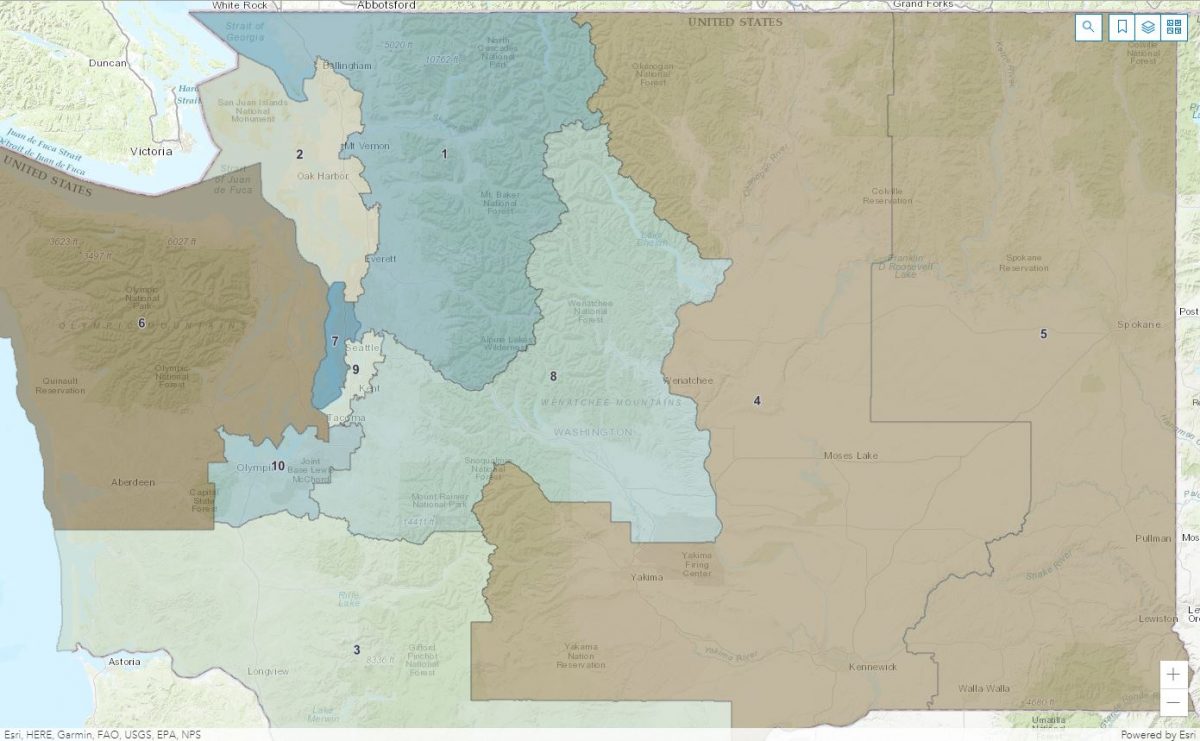 With census data now out by Congressional district, we can start thinking through possible shifts in the maps of the 10 members of Congress representing Washington State.

While the re-drawing of these maps will be a long process building on a range of stakeholder input, a few observations about how these maps will need to change do start to emerge from the data.

This two-part series will start with the 3rd, 4th, 5th and 8th Congressional districts. For my piece on the demographics and re-districting the legislature, you can see that here.

The easiest place to start is with the 5th Congressional District. This district is held by Republican Rep. Cathy McMorris Rodgers. It runs from the Canadian border to the Oregon border, and includes all of the eastern border with Idaho.

It is currently under it’s population target by 19,320 residents. That means it has to pick up some Washingtonians and probably means picking up more geographic space.

A key consideration for map drawers is maintaining the integrity of existing political and geographic boundaries. So, in drawing new maps, care should be taken to not divide communities to the greatest extent possible.

The 5th already does that very well.

In the north part of the district, the western edge runs along the county lines of Ferry, Lincoln and Adams counties. It’s a very clean line and probably makes sense to keep. So, the primary opportunity for growth lies in the south.

That would suggest adding the remainder of Walla Walla County, like the town of Burbank. While the city of Walla Walla is increasingly Democratic, this western part of the county is not. The City of Burbank, for example, cast 73% of its 835 votes for Donald Trump.

That addition gives the 5th about 3,000 more votes. It will still need to pick up about 16,000 votes from the Tri-Cities area. That could come from extending the 5th along the northern edge of Franklin County to about I-395, adding population moving south towards Pasco.

Alternatively, it might come from Benton County, south of Kennewick along the Oregon border. This is a bit less attractive because the district would need to extend farther west than the first option to get the population.

A final option would be to leave aside the western portion of Walla Walla County and just add in most or all of Adams County, population 19,983. This might be clean, quick and easy for map drawers.

The 4th is going to have to get it population from either the 3rd or the 8th.

To the southwest, the 4th is bordered by the 3rd CD, which runs along Washington’s southern border from the Pacific Ocean to the eastern edge of Klickitat County. The 3rd CD is only over populated by 2,222. It doesn’t have a lot to give away, but needs to shed some population.

Much of the 3rd eastern border falls along county lines, which is a good place to divide districts if you’re trying to keep communities whole. However, instead of having Klickitat and Skamania Counties in the 3rd, with their combined population of about 34,000, those two counties could shift entirely over to the 4th. The remaining 4,000 lives that the 4th would need could come from a portion of Chelan County in the northern part of the 8th. Carving in the north side of Lake Chelan south to the city limits of the City of Chelan will probably get the 8th most of what it needs in population. Manson and Stehikin alone give it about 1,500 lives.

However, this creates a little problem for Republicans, but one that is probably manageable. By moving those two counties over to the 4th, the 3rd CD would lose about 21,000 likely voters (not total registered and not total residents), about 2/3rds of which vote Republican.

Moreover, shedding those helps the 4th solve its population problem, but it passes the problem on to the 3rd, which is now down about 32,000 residents from where it will need to land.

The only place to pick those up are on the 3rds northern border: from either the 6th, the 10th or the 8th.

So, in this plan, if Skamania and Klickitat both go to the 4th, much of the new offsetting population for the 3rd will have to come from the Democratic 10th. It can pick up some of the Republican 8th in the southern part of that district, but there isn’t much population there.

Assuming this is the case, and Mt. Rainier goes to the 3rd, and a significant portion of the 10th’s southern Thurston county flank comes too, this will get the 3rd’s new population stable. However, if we assume about 10,000 voters among those 32,000 residents, and a 55% Democratic performance, this represents a -1,000 vote away from Republicans in the 3rd.

JHB should be able to weather that storm, meaning her 54,000 vote differential might be depressed by 8-9,000 votes by these moves. This shift strengthens the 10th in Democratic hands, moving the Democratic performance slightly upwards from its already strong 62%. The 8th likely gets more structurally Democratic as well. While the 8th won’t lose many votes, the votes it will lose will be largely Republican.

More on the 8th CD

There is one other alternative available to the 4th, which is to focus on picking up population from the 8th, specifically in Kittitas or Chelan Counties. Both counties are currently entirely in the 8th. They both have more population than the 4th can handle (Kittitas at 47,935, Chelan at 77,200) so they would have to be broken up. That is not as clean as it should be if you’re trying to keep communities together. It’s better to keep them whole, if possible.

However, any major deduction of population from these two counties will have the result of essentially solidifying the 8th as a likely-Democratic district. These two counties are the bedrock of Republican support in the 8th. If Republicans send portions of those Republican counties off to the 4th, you are kissing Jennifer Dunn’s old 8th district off to the Democrats.

If Republicans want to keep any chance of picking up seats in Washington State, they need to keep as much of Kittitas and Chelan in the 8th. This means JHB should plan to commute farther north when holding town halls.

That means the 8th is essentially able to remain a status quo district, having lost only a part of its northern and southwestern flanks. The roughly 10,000 residents would generate about 4,000 likely general election voters. Assuming those voters are strongly Republicans at 65%, that would mean the 8th becomes more Democratic by about 1,200 votes.

Given all of the other shifts in demographics in the state, that modest shift in the 8th should be considered a win for Republicans in a district they lost by only 14,700 votes.