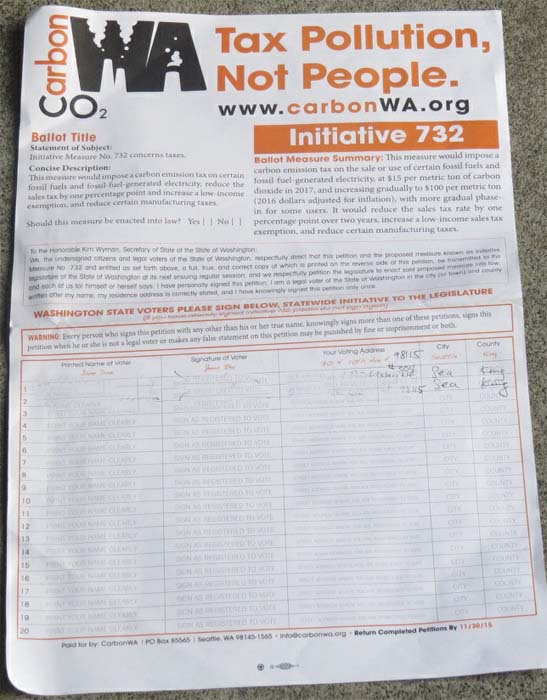 A Pontification on 732, Plan B? Too/Two Confusing? Governor Signature on I-732 Alternative?

We’ve reached a tipping point in Washington State in the conversation about discouraging the combustion of carbon based fuels. It doesn’t matter if our tax won’t persuade China to stop bringing at least one 500 MW coal plant on line every week. Don’t worry about the competitive disadvantage Washington businesses will have compared to their non-carbon-taxing states. Don’t worry, says the governor.

Some Trumpists in the state senate still want to deny climate change and the impact of carbon on our planet, but a majority of the nation’s voters feeling otherwise. This train has left the station, and in a progressive leaning state like Washington, with dogma driven primarily by the left-leaning urban concentrations, that train is so far from the station it is difficult to still see it.

So, right or wrong, good or bad, the issue of a tax on carbon is before the people. I-732 has been certified, it has been introduced in the legislature, and under provision of Article II of the state constitution either it, or an alternative, or both will appear on the 2016 ballot. Or, the legislature can just pass I-732, the Governor can sign it and it will all be over, no ballot, no campaign, how simple.

Now, be advised that organized labor, which looks more like public employee unions than broad based labor of the 1970’s, doesn’t like I-732. It has little to do with the policy and everything to do with how much money can be raked in from carbon producers and used for salary increases for…yep, public employees.

It was alleged that Big Labor actually asked Carbon Washington (I-732 sponsor) to pull back their initiative in favor of a carbon tax that merely dumps the money into the general fund where an agreeable governor could bargain away the funds to needy public employees and other union supporters. Well, without chasing that rabbit down its hole, just know that Carbon Washington refused. Big Labor is now opposed to I-732.

Soon after Labor came out against I-732, the Washington State Democrat party did the same. The resolution came out of the Central Committee, all four of them, four people. Not that Big Labor has any cache with the state D party, but now they are both (they are separate right?) opposed to I-732. The party’s resolution had a lot of blah blah blah in it but, in the end it was that horrible tax increase that choked them up. Frankly, it’s the first tax increase they have not liked in about thirty years.

So here we are. This is interesting. Business, the State Democrats and Big Labor are opposed to a carbon tax for very different reasons.

The Anomalies of A General Ballot And The Vote

I-732 sits before the legislature. The legislature either (a) passes it and it becomes law if signed by the governor, (b) amends I-732 and puts this amended version forward as an alternative and they both appear on the ballot, or (c) the legislature does nothing, “rejects” I-732, and I-732 appears on the ballot alone.

Most folks agree that without a focused, broad based message and information campaign, competing ballot measures cause a lot of confusion amongst voters. Even though this coming general election is sure to bring urban-based progressives who favor carbon pricing, things could still get dicey.

So, does the Republican Senate say no to an alternative? Does the more labor friendly, Democratic House of Representatives heel to demands for opposition to I-732? Or is an alternative and its confusion an I-732 the way to squash the issue? Is the House pro-732, or pro-Labor?

If we superimpose the procedural future of I-732 over the Big Labor/Carbon Washington/Washington State Democrat’s/business tax concern matrix it looks very complicated.

If the legislature crafts an alternative, it raises the issue of whether the governor has to sign it to advance it to the ballot and/or if he can veto it under Article III of the state constitution. Article II (legislative section) reads that “…both measures will be submitted by the Secretary of State to the voters…” And Article III (executive section), reads in part “…Every act which shall have passed the legislature shall be, before it becomes a law, presented to the governor. If he approves, he shall sign it; but if not, he shall return it, with his objections, to that house in which it shall have originated, which house shall enter the objections at large upon the journal and proceed to reconsider.”

So is an initiative alternative “act”? If it is, then the governor must “approve(s)” it before it becomes a law . However, in the case of an alternative he is not approving a new law. So, if he signs it, it does not become law until the people vote on it as described in Article II under initiatives to the legislature. An alternative to an initiative is actually more like a referendum under Article II, which does not require a gubernatorial signature, and goes straight to the ballot.

Senate staff say the governor must sign an alternative. Inquires to the Secretary of State’s office reveal that their AG has not yet opined.

If he vetoes an alternative there is little chance for a supermajority override by the legislature. All of this assumes the Secretary of State, or some other third party, does not sue to block the governor’s action if he insists on signing or vetoing.

Here we sit, a few days from “cut off”–the final day a bill can be heard in its committee of origin. An initiative, and an alternative to an initiative are exempt from the cut off resolution. There is no rush to act, unless the legislature wants to complicate things further by putting up a standard referendum on carbon reduction to the people. Since referendums are not exempt under the cut off resolution, it would have to have a fiscal aspect to be considered past the cutoff date for policy bills. Fiscal bills are exempt from the first cut off. In fact, if passage of a bill is necessary to implement the budget, it is “alive” until the end of the session. The flexibility of this ruling is as broad and inconsistent as a Metro bus schedule.

Ah, what to do, and why? Clean the air? Generate revenue? Raise taxes on carbon for kids or public employees? Make sure something progressively juicy is on the ballot to interest like-minded progressives and encourage them to vote?

Based on past experience, this legislature will not agree on an alternative. We won’t have to worry about a constitutional collision between our Secretary of State, Governor and Attorney General. Instead, nothing will happen, just like on K-12 funding, transportation infrastructure provision, and respect for the voter’s insistence for a 2/3’s vote to raise taxes. Come November, voters in the I-5 corridor will come out in droves to support Bernie or Hillary and vote “yes” for I-732. Maybe.

The reason I-732 may pass is not its genius, its policy or its tax. It may pass because politics and public policy abhors a vacuum and will fill it. The vacuum caused by this legislature is so strong it could suck I-732 into the law books in a heartbeat.

Washington State, land of progressives, cannabis, marriage equality and carbon taxes. Oh, and a demand for a 2/3’s vote on tax increases or new taxes. What will they do when a tax on carbon and greenhouse gas production is before them, and opposed by Big Labor, business and the State Democrat party? November is a light-year away.