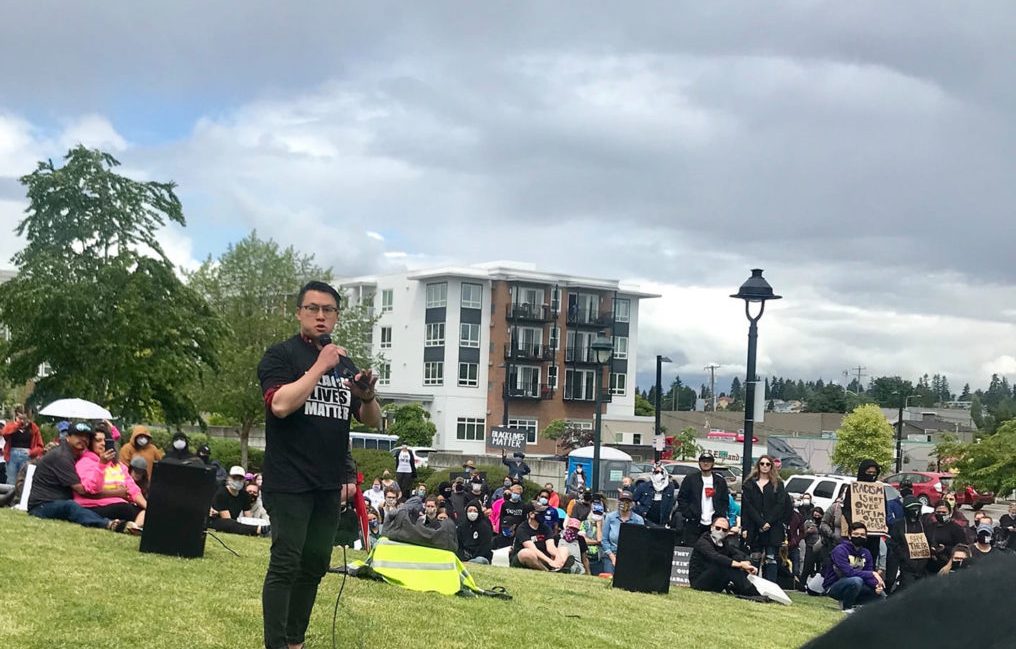 Sen. Joe Nguyen announced last week that he is challenging 12 year incumbent Dow Constantine for King County Executive. Constantine hasn’t faced a serious challenge since he was first elected to the office, but Nguyen says he intends to change that by running on a platform centered around community engagement, rather than “transactional politics.”

In a recent interview, Nguyen told me why he believes his form of community-based politics would be a departure from the status quo. The issues that politicians prioritize, Nguyen says, reflect the experiences they’ve had, the people they speak to, and the people they don’t speak to. Fundamental to his campaign is the idea that if leaders are deeply ingrained in the communities they serve, they will hear clearly what the people most impacted by public policy have to say.

Sen. Joe Nguyen: In the Legislature, we see 3000 to 4000 bills in any given year, yet we only pass about 200 to 300. Oftentimes, people think politics is about being right or wrong, good or bad, Democrat or Republican – that’s actually not the case. It’s about making sure your issue is being discussed.

When you spend all of your time talking to donors or talking to other powerful people, that mindset becomes your paradigm. Those are the issues you prioritize. When you are from a lower income community, or a community that has historically been left out of that process, your issues never bubble up, so they never get addressed. A lot of times people will say something is a good idea, but if they don’t fight for it, if they don’t bring it up for committee or bring it up for a vote, it doesn’t really matter because it doesn’t get done.

If you contrast that with what we were able to accomplish this past year in the Legislature – one of the most transformative legislative sessions in the history of Washington State – I don’t think it’s an accident that we also had the most diverse Legislature in the history of Washington State. People who used to have their voices marginalized are now at the table. To me, that’s the difference between having somebody fighting to have your voice heard versus having your voice at the table and making the decisions as well.”

JN: First of all, it’s hard work and honestly it’s awkward having to confront the realities of the system that has been broken for so long. Systems of power tend to reflect the people who created them. Generally speaking, if it’s just powerful, older, wealthy, white men, it’s just their friends that are in power. You have to break out of your bubble and engage with people that you might not necessarily feel comfortable engaging.

That is what community leadership looks like – you lead from within the community, not in front. For so long, a lot of leaders have come for the photo op, they’ve come for the press conference, but they have to stay and have these tough discussions. Before COVID, you’d have these discussions in some dingy old room with a bunch of community members that are frustrated about something. It’s hard work being able to understand communities that you aren’t from.

Another part of this is, candidly, I don’t take and have never taken corporate PAC money. You still hear some people say, ‘Well I still vote against them.’ That isn’t the point. My point is making sure my values are very clear, because if people have donated to you in the past, you’re probably more likely to pick up their phone call. That’s what I mean when I talk about transactional politics. There’s this quid pro quo type of environment where people help on the campaign side which then translates to the legislative side and creates a vicious circle, yet community members who don’t have wealthy lobbyists get ignored.”

MG: Where do you draw the line on using personal experience to inform your politics?

JN: I think your personal experience should always be part of your decision making because it inherently will be. However, your personal experience should not be the only factor in your decision making. On the Senate floor, you will hear someone share an anecdote and why they’re doing what they’re doing. I think you should bring those perspectives to decision making, however, you should also be open minded and understand that there are other perspective as it relates to that issue.

One of the ways that manifested itself the most to me last session is when I worked on the arbitration bill. I had a perspective in terms of what I wanted to do, and I met with dozens of people for hours upon hours, including law enforcement, families, organizations, and cities. I think we ended up crafting a bill that addressed systemic problems in a way that actually brought people together. The final vote for that bill was bipartisan.

That is what it means to be more deeply ingrained. If it had been transactional, I probably would have only listened to people who supported me and it might have been a different outcome. If it had been transactional for somebody more conservative than me, it probably would have been a very different outcome and may not have passed. By focusing on the problem and how it impacts communities, that’s how we build a better government that actually serves people.”

MG: You’ve spoken about your dismay that certain issues, namely homelessness, have not been acted upon with enough urgency. I’m wondering if you think that has more to do with the approach taken by politicians rather than a lack of policy consensus. The reason I ask is that you pointed out recently that after you signed onto a letter with moderate Democrats urging Governor Inslee to rollback certain COVID restrictions on restaurants, it worked. He listened. Do you think that a more adversarial approach is what has been lacking in the political response to various issues?

You can’t make top down decisions and then not tell anybody until after the fact. In that moment, my staff and I had spent maybe 20 hours a day answering tons of emails from people trying to file unemployment claims, trying to work with small businesses to get access to PPP, working with businesses who couldn’t afford to pay rent. I was honestly angry at that point, because I had talked to thousands of constituents who were on the cusp of financial ruin and they had to choose between getting COVID or paying rent.

In my mind, I knew we needed more resources and more support. I sent multiple letters beforehand asking for more support and got ignored. Only after I signed onto a letter from a moderate Democrat that the progressives hated did anybody pay attention. And then also, by the way, we got more funding for undocumented immigrants and then the restaurants did stay closed, so everything we wanted happened.”

MG: It’s clear based on your platform that you are embracing a progressive vision for King County. As you begin this campaign, how are you thinking about winning people over who disagree with that vision? What will you say to people who are, for example, very unhappy with how city hall is functioning?

JN: Despite being well known as one of the most, if not the most progressive member of the Legislature, I’m actually very mindful of working with my colleagues on the other side of the aisle. In fact I have pretty great working relationships with many of them to the point where one of them said, ‘Joe doesn’t play games.’

Most of the bills that we pass in the Legislature are in fact bipartisan. If you look at things like economic recovery, supporting growth for small businesses, improving infrastructure – that stuff is very bipartisan. My whole focus has been getting stuff done. Even if people don’t necessarily agree with me, they do agree that government needs to be more effective, more efficient, and then get things done.

Based on the conversations I’ve had, there is definitely a desire for change. Regardless of whether you’re a Democrat, a Republican, or neither, I think everyone understands that as we’re getting out of this pandemic, we can’t be doing the same things we were doing before. I don’t know if many people are excited about incumbents who’ve been there for 12 years or 25 years in public service. I think people want someone who is new and ready to get things done.”

MG: Conversations about preemption, as well as the way local and state government can coordinate on issues not exclusive to one area, have taken place across the state. What have you learned during your first term in the Legislature about the way state government can best work with localities?

JN: It’s all in the nuance. You ask questions, you figure out what’s wrong, and you solve these problems. I think people don’t realize that oftentimes when you just force the conversation, when you show up and figure out what the solution should be, that’s what it takes to get it done.

Similarly with Seattle City Council and King County Council – we should be working together. Candidly, I’ve heard people talk in various jurisdictions about the need for progressive revenue, I don’t remember seeing them in committees when we were trying to pass legislation for progressive revenue. You can’t do things performatively if you seriously want to help people.

If you do think Black lives matter, you need to show up after the protests are over and after the cameras are off. You have to show up and engage with community and figure out what that looks like. If you think that police accountability is a big deal – you’ve got to come to these meetings and hash out the policy proposal and then you have to listen to people who are impacted. That’s at the core of what I think is broken in our political system.

Oftentimes, you’ll get very smart people in charge, but who don’t have the humility to understand the perspectives of other people as well. If we’re able to authentically show up and listen and then take that perspective to craft policy, that goes a long way.