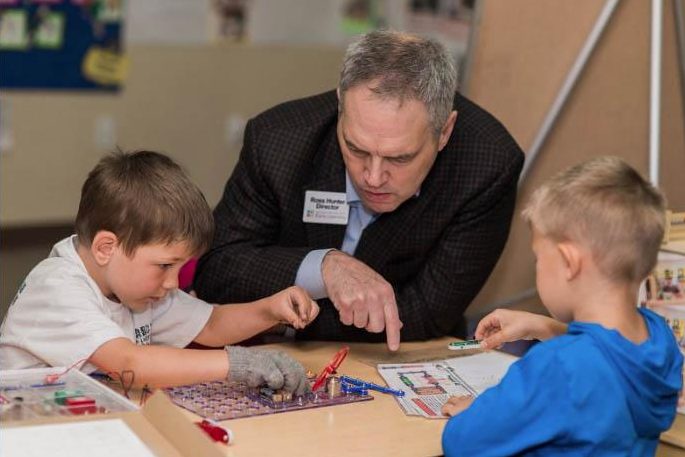 Q&A: What DCYF Secretary Ross Hunter is seeing amid the pandemic

It is hard to match the level of institutional knowledge possessed by Ross Hunter, Secretary of the Department of Children, Youth, and Families (DCYF).

Before his appointment to DCYF in 2017, he served in State House from 2002 to 2015, where he chaired the House Appropriations Committee and was a member of the Washington State Economic Revenue Forecast Council.

Amid interlocking economic and health crises, there was little doubt that policies related to the well-being of children, youth and families would be a priority for legislators this session. A few days after the policy committee cutoff, I spoke with Hunter to hear about DCYF’s agenda this session, as well as his perspective on child welfare, the state’s foster care system and youth behavioral health.

Michael Goldberg: Over the course of the pandemic, have there been any indicators that you’ve paid particularly close attention to in tracking how the pandemic has impacted child well-being in Washington State?

Secretary Ross Hunter: Normally we get 120,000 calls a year on our hotline. It’s seasonal. We tend to get big bulges right after school vacations because teachers are mandatory reporters. Teachers went away in March last year. The calls to the hotline dropped by 50-60 percent. They came back up a little bit and settled at about 40 percent down. That has translated into fewer opportunities for us to go and provide resources for people that might be having stress. We’ve been tracking that closely.

We were worried, and we’re still worried, though we don’t have a lot of evidence, that there would be an increase in child maltreatment as a result of everyone being locked up in the same room. We’ve been trying to track this but we’re not seeing it in the data. Anecdotally, we’re hearing about it. But we think part of the reason why we may not be seeing it as much as we thought is because of what happened with the CARES Act. It stabilized people financially, which has not typically happened in big recessions.”

MG: Advocates for senior citizens say many have faced a double pandemic – outbreak and social isolation. At the other end of the age spectrum, do you think an issue like learning loss is another pandemic in and of itself?

RH: There is a lot of research in the learning loss space. This is one of the major elements that contributes to racial differentials in outcomes measured at high school graduation; it compounds. So the kids that we work with are largely poor. They don’t have a robotics class in the summer. They don’t have a summer lined up with intellectually engaging things that also enable you to go to work.

If you’ve got a set of parents where one parent is at home supervising the kids, that’s more likely to be successful. You look at the the kids that I work with and their parents work they are much more likely to be in jobs that require them to physically go to work. I expect that we are going to see stunning learning loss.

Normally we just see it over the summer, now we’re going to see it for a whole year’s worth of experience and it will be skewed. Kids who are born further from opportunity will have a worse experience and it will play out through their whole school year. We should put a bunch of money into ameliorating that this summer. As soon we can get those kids back in school safely, we should have them in school physically for the duration.”

MG: Back in April, you were concerned that Washington would lose 20 to 30 percent of its foster care base because foster parents were not accepting children back, or they were claiming that they were not going to accept children back, due to concerns over physical visitations during the pandemic. Do you have any updates on how the state’s foster base has faired since then?

RH: We have a bunch of trends going on. One trend is we’re placing fewer kids. Some of that is intentional. We try to reduce the number of kids in foster care, so we’re trying to make sure that we keep kids at home as safely as possible. Two, we’re not seeing a decline in actual licensed foster homes but we are seeing a reduction in foster homes who are willing to take placements during the pandemic.

We’re struggling to place some kids. We particularly struggling to place teenagers, due to the nature of teenagers. But many of our foster families have dealt with COVID incredibly well. We’ve done a lot of work to provide PPE and we changed our visitation model in the summer until we could distribute PPE. We transitioned to virtual visits and we handed out thousands of tablets to try and get families and kids to have the technology.”

MG: How satisfied are you with the slate of bills in your wheelhouse that made it past that policy cutoff and are there any in particular that you’d like to highlight?

RH: HB 1186 is the centerpiece of our work to rethink how we deal with incarcerated teens who are going to rejoin society in a small number of months or years. There is limited research on incarcerated teens. There’s a lot on incarcerated adults and there’s a lot on preschool aged children, and not a lot in between. But the research does show that they need to be connected to their community. They need to have treatment for substance use problems. We’re trying to create a world where we have fewer kids in big institutions and more as close to their community as possible. That bill is a big part of that effort.

We have kids in a cell today and I don’t think any of them live within a four hour drive. Families can’t come see them, which is cruel and unusual teenagers. They may say that they don’t want to see their parents. They actually do.

MG: Any other bills you’d like to express support for?

RH: We also support HB 1227. It moves the foster care system to look more like the Indian child welfare system. We like it but it has to come with the resources we would need to implement it safely. We need more CPS staff because the burden of proof is higher. We need to automate that work or we can’t do the quality control work that we need.

We have a licensing bill that will enable us to provide a lot more racially unbiased care for kids. Kids do better when they’re with family. Black people get arrested for stuff that white people don’t get arrested for. That was true 20 years ago and it sits on your record. Now all of a sudden grandma can get licensed to take care of her grandchild, when that’s absolutely the best placement for the child. That’s crazy. So we want to be able to make changes in that licensing world.

MG: As a former legislator, what has been like to watch this session and its unique logistics?

RH: It’s just so slow to do stuff on Zoom. You miss a lot of the hallway conversations that are really critical to getting a bill to the place where it has 50 votes in the House and 25 in the Senate. You have to do everything explicitly now where in five minutes sitting in the back of the chamber, you could work out a problem with two or three people and the bill was possible. Now you’ve got to set up a meeting. It’s like hell. So I think not much is going to pass this year, even if they’re good ideas.”

MG: Another bill that came out of the Children, Youth & Families Committee was HB 1354. It would establish the Washington Youth Suicide Review Team to review the circumstances related to suicides occurring among youth up to age 24. In your experience what does it take for review teams like this to actually succeed in changing outcomes?

RH: Doing these reviews is really important, but you have to be very careful in doing them. This is like if there’s an error at a hospital. Hospitals are a lot safer now because they do safety reviews. If you do a safety review and you really want people to tell you, ‘I made a mistake,’ you have to protect them from the consequences of saying that. If you’re a doctor and you ever say, ‘I made a mistake,’ you get sued until you’re blue. The same thing is true for governments. Even if you don’t do something wrong you could get sued.

You have to think about that, otherwise you basically create the document that is the basis for a lawsuit, and then no one wants to participate in the thing and you don’t learn anything. It just become bureaucratic, meetings to have meetings. You have to create that sense of safety where caseworkers can admit mistakes. So I like the idea behind this work and I would like to have someone sitting in, because there is work we can learn from those review teams.”

MG: On both the state and federal levels, ambitious child benefit proposals have been proposed in recent weeks. Is that merely a result of the pandemic, or do you think the child welfare policy conversation was headed in that direction already?

RH: I think policy conversation was already headed in that direction. When you look at what maybe can be called the “Bruce Springsteen trajectory,” – the change in the working environment for working class people from the 70s until now. You see an enormous shift where people used to make enough money even if they were earning minimum wage. If you were working at the federal minimum wage when I graduated from high school in 1979, you’d be making the equivalent of 22-something an hour. Even in progressive states, the minimum wage hasn’t caught up.

At the same time, housing costs go up crazily. Here in Seattle, we had Boeing, then Microsoft, then Amazon and now you’ve got the rest of the tech industry driving up housing prices. We as a society have an interest in investing in our children. I don’t want to live in a walled off garden as a senior. So I want to make sure every kid has an opportunity to be a productive member of society, and they need a set of resources as kids. If you’re going to work for a living, you oughta make one. I also think it’s really important that we make sure families have time with their kids. I think these are really important conversations that have shifted the dial.

We’ve lived in a world of declining taxes since the 60s. Taxes for people in the professional class in Seattle are what puts Washington in the bottom five states in America in terms of total state and local taxes. I think you’re seeing a reaction to that and people want to make sure their kids grow up safe, nurtured and part of their community.”