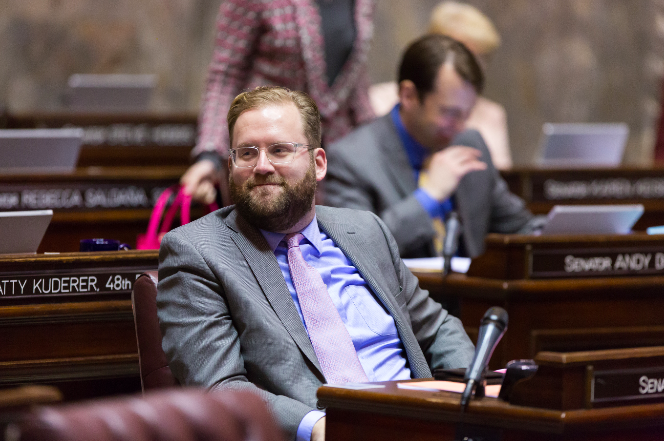 Senator Marko Liias has launched a campaign for Lt. Governor based on his progressive bona fides and experience as Majority Floor Leader. He’s earned endorsements from the current occupant of Lt. Governor’s office as well as several of his Senate colleagues – including Joe Nguyen and Emily Randall – for his work moving legislation aimed at protecting vulnerable populations.

With the global population at large, and certain subpopulations in particular, more vulnerable now than in any other moment in recent history, I reached out to Liias to ask what the prioritization of a progressive Lt. Governor should look like in the years ahead.

In a conversation which has been lightly edited for clarity and length, Liias outlined his case for why he’s the right person to help move Washington forward as Lt. Governor.

Michael Goldberg: The stakes for this Lt. Governor’s race are heightened by the sense people have that if Vice President Biden wins the presidential election in the fall, Governor Inslee would be a likely choice for a cabinet position, which means that the winner of this race would become the next governor of Washington. Did that factor into your decision making it all?

Sen. Marko Liias: At its core, the Lt. Governor has three roles: One is to be the President of the Senate – for which I believe I’m the most qualified candidate in the race – two is to be second in command in the executive branch and that’s where I think having the most progressive record in the race that I’ve built over 12 years in the Legislature qualifies me to be Governor Inslee’s partner, and three is to run the Lt. Governor’s office, which is a small state agency and has a number of programs in that regard.

MG: It’s clear that the focus in Olympia for the foreseeable future will be rebuilding the economy in this COVID-19 era reality. Rather than simply asking about your ideas for how to do that, I’m curious to know if you think the conditions brought about the pandemic have created space to strive for policies that may have seemed too ambitious or politically untenable prior?

SML: I do think this pandemic has given us all a lot of time at home to reflect on our core values as Washingtonians. I think it’s also highlighted the critical importance of state government. It provides a reminder that all of the critical services that state government provides are important, not just during pandemic times but in the rest of our lives as well. I do believe this is the moment to really be clear that we need to make protecting critical state services our number one priority in the recovery and beyond.

In the last recession during the Gregoire Administration, we took an austerity approach and it’s taken us a decade to rebuild from that. I’m really committed to working with budget writers, Governor Inslee, and leaders around the state to make sure we don’t take that approach; that we are finding the resources to protect those critical state services. As we pivot to the future, we need to think about how we rebuild our economy in ways that are stronger, more sustainable and more dynamic than before. In my mind, there’s clearly a need to think about a green transition and the work we need to do in every community around the state to build clean energy and clean technology jobs. We see that with silicon and solar panel manufacturing that takes place in a variety of communities around the state. We see that in new green technologies like mass timber that would enable us to build more sustainably while creating jobs in timber communities. We also need to think about how we continue to grow an aerospace economy that is envisioning biofuels.

So, over the next few years I think we need to protect our critical services, rebuild our economy, and also pivot towards that green transition that lies ahead. Finally, we really need to do more work to connect our small and medium sized businesses to the opportunities in international trade. This COVID induced recession is showing us how hard small and medium sized businesses are being hit and we need to focus our efforts on helping those entrepreneurs grow and thrive in the future.”

MG: Transportation and the climate policy are issues that always feature prominently in statewide races here in Washington. On the Carbon Pricing System, Low Carbon Fuel standard debate, or more broadly just in terms of expanding the state’s transportation infrastructure in a green way, as Lt. Governor how would you contribute on that front while presiding over the Senate?

SML: I was the prime sponsor of Sound Transit 3 which is the largest expansion of mass transit in our state’s history. I think that really speaks to the kinds of investments we need to make to create those zero-carbon alternatives for folks and the infrastructure on the ground to enable Washingtonians to move around in a more carbon-neutral way. There are a variety of mechanisms we should look at and I’ve been supportive of expanding the Department of Ecology’s authority to regulate greenhouse gases. I’ve cosponsored the low carbon fuel standard in the Senate; also have supported cap and trade and carbon tax approaches. I think we need to work with stakeholders from industries and communities that are heavily impacted. There are some great community advocates from communities of color that have stepped forward to help us think through the implications of climate policy on our most vulnerable and most exposed.

The Low Carbon Fuel Standard is an easy win because fuel prices are so low right now and we’ve seen the model work successfully up and down the west coast. I think that’s a system we could plug into and begin taking advantage of and begin creating jobs in rural parts of the state. There was a biofuels refinery located in Grace Harbor that would like to grow; this would create a real marketplace for the products they’re able to create plus the ability to source feedstocks for those biofuels from other parts of Washington.

Into the long term, I do think we need a comprehensive carbon climate reduction mechanism. At some point we need an overall approach that unites the work we’re doing in the energy sector, in transportation, in the built environment, and brings those pieces all together.”

MG: Should the Legislature convene a Special Session in response to the pandemic, housing will obviously be a key issue. One legislator said recently that housing has been the most ideologically charged policy issue in the Legislature over the past two years and they don’t see that ending anytime soon. Why do you think that is?

I think it will take everyone coming together to find some win-wins where there’s space to address all of the elements of this policy discussion. What can public agencies do? How do we tackle very low income housing and homelessness? But also how do we talk about middle incoming housing, incorporate the private sector, incorporate initiatives like what Microsoft is leading on the east side. How do we bring all of these perspectives into a dialogue so there isn’t an Us vs. Them mentality or a one-size-fits-all solution? I’m encouraged to see that dialogue beginning in earnest at the regional level and hoping we can bring some of those lessons learned to the statewide conversation.”