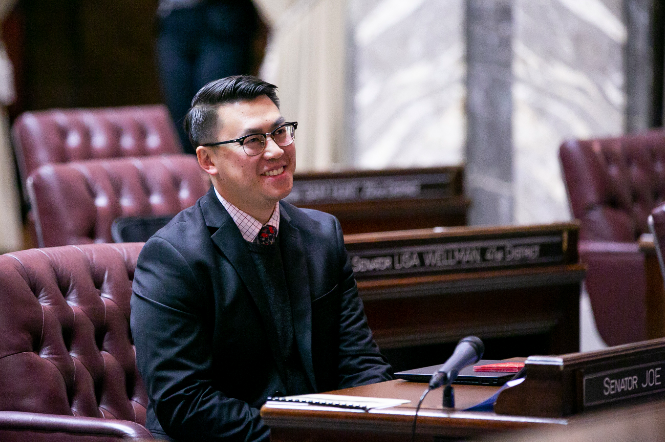 Persisting inequities have been top of mind for Senator Joe Nguyen as he’s worked to shore up social services and protections through progressive legislation. He’s been a leader in the Legislature on technology policy and expanding TANF benefits. Now, with jarring shortfalls looming, Nguyen is focused on the budget.

I reached out to Nguyen to hear about the budget proposal he’s been working on. We also discussed the application of benchmarks in analyzing COVID data and the inequities laid bare by the pandemic.

Michael Goldberg: State legislators are in this intermediary period between regular session ending and a probable special session. Based on the conversations you’ve had and the work you’ve been doing, what should the Legislature’s prioritization look like in the special session?

Senator Joe Nguyen: I think we’ll see a special session in the late summer or early fall when we have more information about several different variables, including specifics related to the support we’ll receive from the federal level.

There are subcommittees in the Senate and House to mitigate specific impacts as it relates to COVID. Everything from supporting people to supporting businesses, economy recovery, and budget stabilization. One thing to keep in mind is that even though a special session isn’t happening at this moment, there is already work being done to figure out the scale and magnitude of what’s going on, and what we need to do to respond to this crisis.

Senator Dhingra and Senator Mullet worked with the Governor’s office to figure out reopening strategies for various businesses, and a lot of the things that you’re seeing now included that labor. So, the purpose of the special session is largely to pass legislation as needed, but the work is ongoing.

When I first came into office, a lot of folks talked about the 2008 recession and the impact it had on the budget in subsequent years. So, personally I’m focusing on the economic stabilization and making sure we don’t just have drastic cuts, but also appropriate resources in place to support vital services.”

By becoming a member with a any re-occurring donation of any amount – $5, $10, $20 or any amount that makes sense for you – you are ensuring that the conversations taking place in Washington State civics and politics are brought out of Olympia and to your screen.

One-time contributions of any amount are always appreciated.

Michael Goldberg: You said something recently on the great platform that is Twitter which I think was really important. You said, “The problem with focusing on ‘metrics’ is that they are used to benchmark defined outcomes. There is still uncertainty with this pandemic. In business you have the flexibility to iterate and refine. In a public health crisis the consequences of getting it wrong is lost lives.’ It almost seems as though when different strategies toward mitigating the public health crisis and reopening the economy are compared, the argument gets condensed down to who is taking a data driven approach and who isn’t, or who has the best charts. Can you talk about the factors we should be watching that might not necessarily show up cleanly on a chart?

SJN: My background is in strategy and analytics. I did it for a living and saw how it played out at large companies – given how difficult it is there even with people whose expertise is in analytics versus politics where you don’t see that as much.

The main things you have to watch are the virus spread and health impacts associated with the resources we have, but we’re not in a vacuum. We see other jurisdictions and other countries opening up that we can watch closely. So, it’s twofold in the sense that you have to review what’s going on in terms of transmission rates, deaths, and impacts to health care facilities here, but you also need to look at what works in other states and abroad.

When any company has metrics, they’re benchmarking something that is defined usually by revenue, consumption or usage, and they refine it over time. You don’t have that luxury with this situation. You have a global pandemic that doesn’t have a vaccine, antibody tests, or good contact tracing. As you get more insights into what the virus actually does, that’s when you get more insight into what you can and can’t do.”

MG: Seattle & King County released updated data on COVID-19 cases, hospitalizations and deaths by race and ethnicity. The updated data shows that in King County, COVID-19 is disproportionately impacting communities of color. This disparity is thought to result from underlying health conditions, living and working conditions etc. How might officials craft a targeted response to a virus that, in the way it spreads, seems to be very targeted?

SJN: While the virus itself doesn’t have a bias, the system certainly does. So, I’ve been cooped up the past few weeks working on a potential budget proposal for Washington State, and a lot of it focuses on the need for having vital services be intact. When we look at things like TANF or basic food services, generally, if you’re taking care of the least of us you’re taking care of everybody.

In 2008, as a country we basically just gave big businesses tax breaks and then we gutted social services – and then you see huge disparities. I want to do the exact opposite and make sure folks on the frontline have their basic needs met. I also want to make sure we have a way to pay for this in a revenue stream that is progressive. Companies like, for instance, Amazon and Microsoft have profited greatly and if they’re able for a period of time to help generate more revenue to provide basic needs, I think that’s the way to do it.

Knowing that we’re going to have a $5-10 billion shortfall in the next biennium, and that our revenue streams in Washington are not very diverse we have to have the conversation about how we pay for the services we need. “

MG: Washington State addressed the last recession with austerity policies. You’re someone who would like to see a more progressive approach adopted this time. Grappling with these divergent approaches can lead to hard feelings, as those who tend to champion an austerity approach feel aggrieved over being thought to possess ulterior motives. Without saying that, what is your sense of why legislators, even some on your own side, tend to believe austerity is the right answer during economic downturns?

SJN: Oftentimes when you look at legislators, they legislate based on their personal experience. To become a legislator, you have to get elected – you don’t have to get a masters degree in economics. When you look at how a budget works, ingrained in that thought process is how people have lived their own lives. So, the common narrative is: ‘Government should buckle down just like my family has to buckle down.’ But the difference is, the government and your family structure are very different. I think oftentimes it doesn’t come from a place where people are trying to be malicious – though I do think there are some cases where that’s true – but rather it just seems like the easy thing to do: ‘You lost your job so now you need to cut back.’ The problem with the government cutting back is that all of these folks who rely on social services to become stable, they become destabilized and the underlying issues get even worse.

So, you have to look at it as an investment. For us, the goal should be keeping people as stable as possible. If you look at what happened in 2010-2011 – we had federal dollars coming in for the prior two years – because we gutted the budget so much, we saw an increase in homelessness, unaffordability, and all these different inequities. As of these last biennium, we still weren’t back to those 2008 levels. If we’re not able to get back to those 2008 levels, despite having the most robust economic growth in Washington State history, that approach probably hasn’t worked.

This is a Keynesian economic theory that Obama used in 2008 to get us out of the financial crisis. Most folks aren’t necessarily in tune with the economic theories used to mitigate a recession – most folks came to the Legislature because they had a specific issue they cared about and fighting a pandemic wasn’t on their radar. But as with any piece of legislation, you have to raise awareness and have candid conversations and that’s how most perspectives are formed.”

MG: Anything else you want to share about what you’re working on at the moment?

SJN: I’m taking a very hard look at our budget and being able to raise revenue while also having to cut. The hardest things that legislators have to do is raise taxes or cut programs. We’ll probably have to do a combination of both. We’re going to have to make these decisions and they won’t be easy, but they will be necessary. The goal is to make sure we mitigate long term impacts. Also top of mind for me is the fact COVID has exposed inequities in our society in a very tangible way. The fact that over one million people are filing jobless claims right now. There are only about four million people that are working in Washington State, so that’s 25% of our workforce filing jobless claims. We’ve only exacerbated things that are already in existence, so it’s up to us to lead and solve these problems and not just try to punt for future generations down the road.”

This conversation has been edited and condensed for clarity.