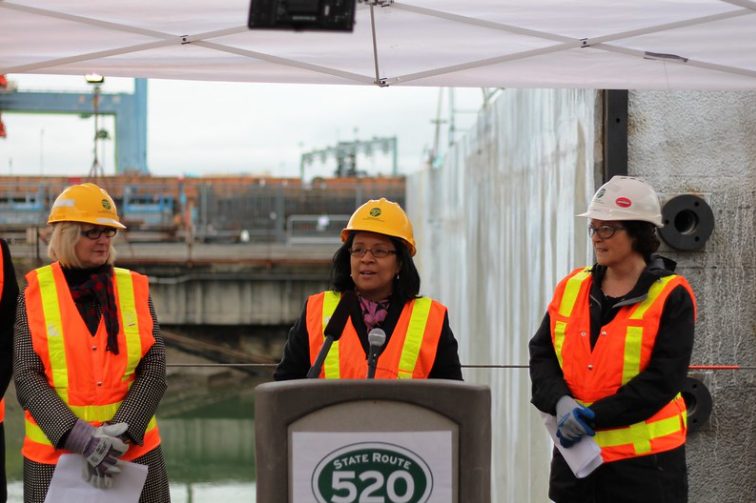 Congresswoman Marilyn Strickland (WA-10) announced this month that she is cosponsoring an updated version of H.R.2483, the Build More Housing Near Transit Act, to incentivize the construction of low and middle-income housing in transit-served locations.

As an affordable housing crisis continues to grip the Puget Sound region, areas like Tacoma have been forced to grapple with changing neighborhoods and displacement. This is an equity issue for the area’s historically Black neighborhoods and for people who can’t afford to live near their jobs. It’s also a climate issue, as research shows that building affordable housing near transit can significantly reduce greenhouse auto emissions.

Strickland dealt with the intersection of these issues as Mayor of Tacoma for eight years, before her election to Congress. I spoke with Strickland recently to hear her take on what the Build More Housing Near Transit Act could mean for Washington State, how the politics around affordable housing have changed in recent years, and the role the federal government can play in encouraging local governments to build more housing near transit.

Michael Goldberg: You have considerable local government experience. In the effort to increase housing supply and build out transportation infrastructure, two aims that have the potential to change neighborhoods in myriad ways, how can the federal government support local communities?

Congresswoman Marilyn Strickland: It is the federal government’s responsibility to support the aspirations and plans of local communities. We also know that local land use has been one of the biggest barriers to getting more housing. As we think about this big investment we want to make in infrastructure, we believe it’s an opportunity to leverage those opportunities to get local communities to think holistically.

MG: When discussing how the politics around this issue have changed over the past 10-15 years, Congressman Peters said that in San Diego, environmentalists were not for growth. Even in downtown San Diego, they didn’t always support upzoning. But those politics have now shifted for various interest groups. One way you see that is in the now active YIMBY movement. Did you notice a similar shift take place in Tacoma while you were mayor? If so, what do you think caused this NIMBY to YIMBY shift?

MS: I would say it was the recognition that we simply did not have enough housing. When you think about those of us who are ‘YIMBYs,’ and I probably call myself an early adopter of the YIMBY movement, we know that we have very carefully tried to plan growth centers around transit that would provide for mixed-use.

I remember my time at Sound Transit when we were talking about Subproject 3 (SP3). We got into this long conversation about transit oriented development and some people on the board said ‘Why are we going into the housing business? Our job is transportation.’ So even among transportation leaders, you’ve seen a shift in attitude about the relationship between transportation and housing.

The general public acknowledges that we desperately need more housing, but there are people who are concerned about preserving single family neighborhoods. But if you look at most planning documents, we’re trying to drive growth into what I call “mixed-use centers” and business districts which gives us an opportunity to preserve single family homes.

There is nothing more contentious than land use in politics, so we’re trying to do what we can at the federal level to incentivize transit agencies to take a holistic view and to do feasibility studies about how they could put housing near transit. It’s good for the environment, it’s an equity issue and it just helps cities thrive.

MG: There are people who say they don’t like tall buildings, or perhaps they don’t like what tall buildings indicate about how their neighborhood is changing. This type of concern can also apply to transit projects. What do you think is a winning argument to make to folks who might be concerned about what the arrival of a big new apartment building or a transit project might mean for their neighborhood?

MS: When you think about single family neighborhoods, there’s often a fear that these giant buildings are going to go up right in the middle of where these houses exist. The argument that I make is that our communities in the Puget Sound region – from the Central Puget Sound down to the South Sound – are growing. That’s a fact. So we have a choice to make. We can add more housing which will help drive down prices for everyone and create a more inclusive economy, or we can put our heads in the sand and just end up having people who are constrained and not able to afford housing. This is affecting people of all generations.

Change is something that is inevitable in the Puget Sound. We have the opportunity to manage it and make it work for everyone, or we can just let things happen to us.

MG: One of the reasons people like living in the Puget Sound region is that you can be close to nature. And residents want recreational areas persevered, and that limits how far development can expand. So it seems that if residents want nature preserved and they want more housing, there needs to be a great degree of housing density in urban areas. Do you think that is a clear tradeoff that people are willing to make?

MS: I don’t know how clear it is, but I think more and more people understand it. If we want to preserve some areas then we need to create zoning that allows some buildings to go higher. When housing and transit are in close proximity, that is one of the best things we can do for climate change. There is a bigger conversation about what we’re doing to address climate change, and putting transit near housing is one way to do that.

Coming back to the equity conversation, so many people who can’t afford to do it have to drive long distances to get to work because they don’t have access to reliable transportation. I think the more we talk about that, the more people are realizing this a good thing. One of the best examples is that this bill has the support of over 100 organizations, organizations, from the Planning Association to Habitat for Humanity to home builders to transportation agencies and Up for Growth – which I’ve been a part of for a long time. This is also bipartisan bill, and I think that speaks to its feasibility.”

MG: Can you say a bit more about how local governments, state government, and the federal government can coordinate on this issue, as well as the distinct roles each can play?

MS: One of the arguments I made for my candidacy when I ran for Congress was that you needed a local government lens in Congress. As those of us who are in Congress have the chance to interact with leaders in our communities, meeting with cities, towns and transit agencies, we want to be very aware of what their plans are. We want to work with communities to look at what their housing aspirations are and think about how we can put this together.

MG: Do you think we could see this bill pick up steam in the near future?

MS: I think it could pick up steam very soon. We’re still focusing on trying to get through this pandemic and the American Jobs Act is coming up soon. That requires a big investment in infrastructure, so I think the conversation will get daylighted. There’s an opportunity here for those of us who have cosponsored this bill and supported it to get it moved through. I think the fact that it’s bipartisan gives it a better chance of getting passed out of the House and ultimately the Senate.”