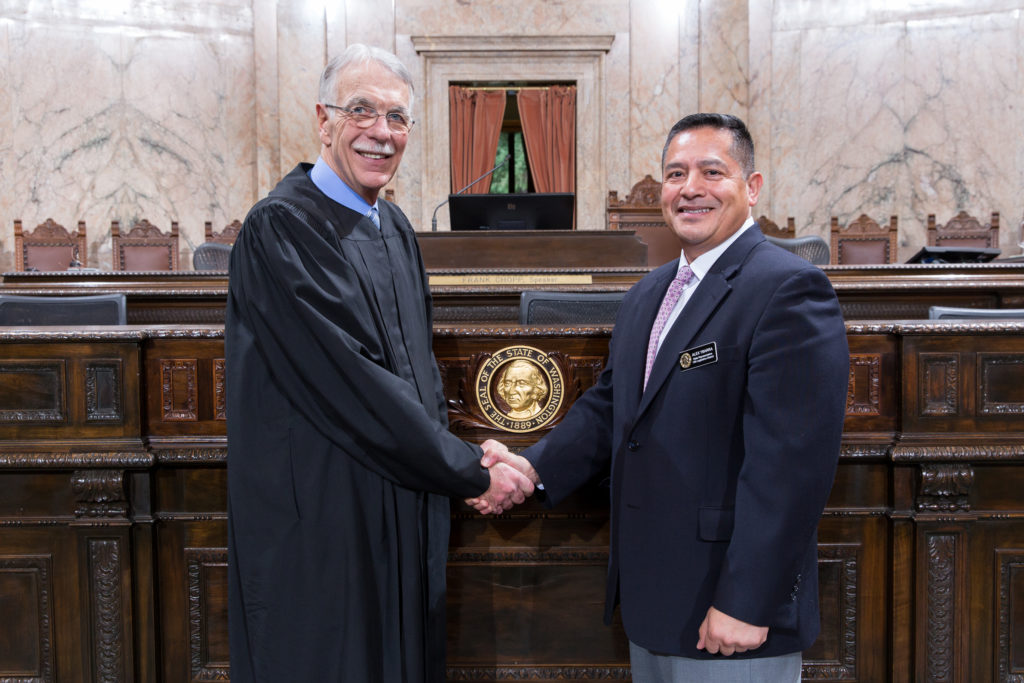 Rep. Alex Ybarra represents Washington’s 13th Legislative District, and sits as a ranking member on the Education Committee. He also serves on the Civil Rights and Judiciary Committee, and the Health Care and Wellness Committee.

On Aug. 19, Ybarra, along with fellow 13th Legislative District legislators Sen. Judy Warnick and Rep. Tom Dent wrote an open letter to Gov. Jay Inslee and Superintendent Chris Reykdal, voicing their concerns over vaccine mandates for state employees, health care workers and educators. The Washington State Wire circled back with Rep. Ybarra to talk about that letter, as well as propositions to put limits on Inslee’s emergency powers.

Aaron Kunkler: You’ve been critical of vaccine mandates. Why is that?

Rep. Alex Ybarra: Before we start, I can probably just say that I have had COVID, and I also got my shots. I got my vaccinations because my mom’s 83, and so we’re just trying to be as safe as possible around her. My family and I decided that as well as my mom. I want all kids to be safe, and I want all teachers to be safe, and I want everybody to be safe. So [the statement] I put out was not to harm anybody. There was just a mandate that I think that is going to backfire.

There’s a lot of people that I talked to that were right on the fence, and saying I’m going to get it but I’m gonna wait it out for a little while longer. Most of them were younger, they were in their 20s, 30s, even in their late 30s. They’re just saying, look, we’re not the ones that are passing away … and so they were kind of holding back, waiting for what’s going to happen to people that have been vaccinated. But when the mandate came out for state employees and health professionals, all those folks I talked to I went back and talked to many of them and they all said, ‘Well, you know what, because the [state] is going to make me do it, I’m not gonna do it. I’m off the fence.’ So I think there’s gonna be tons of people that will say not no, but hell no I’m not gonna do it, because you’re telling me to do it. I received, I think, 2,500 emails in two days after that mandate, and all of them — every single one — get rid of the mandate. That it’s the worst thing in the world, it’s infringing on our rights. So again, I think that it’s gonna backfire on the Governor, I think that he would knock on a lot more people vaccinated if he wouldn’t have make it mandatory.

AK: Is that backlash something you’ve been hearing from other lawmakers as they talk with their constituents?

AY: Yes, at least from the folks in my caucus and in the Senate caucus. That’s how it is across the board. I haven’t talked to many Democrats, because they’re not from my area. But most people in my caucus are, like me, saying mandates are not a good thing. We’re already not really happy that the Governor has been running the show for a year and a half with no legislative inputs. He makes all the calls, doesn’t talk to anybody. They’re not legislators, and we’re the ones that represent the folks in our district and we haven’t got a call.

AK: On that note, I know that there’s been a lot of talk among Republicans in the Legislature about putting more constraints on the Governor’s power. Is that something you’d like to see, and if so, what kind of legislation would you support?

AY: There’s probably been three or four pieces of legislation that were put out during the last session. Basically, it was to curtail the emergency powers that he has. I think everybody in the beginning thought that when you have an emergency, it’s gonna be like Mt. Saint Helens, where it’s three days of emergency, maybe a week of emergency. We have to really lock everything down and put everybody in their houses. And so you get emergency powers, and those were great, but I don’t think anybody ever envisioned us being in lockdown for a year and a half, and emergency powers extending for that long. I think after 30 to 45 days, it became really evident that the Governor is going to do whatever the heck he wants, without speaking to anybody. After that happened — and he wasn’t telling us what he was doing, he was just doing things — my constituents were just screaming, saying tell me why is he doing this? I don’t know, he doesn’t talk to us, he doesn’t talk to legislators. I didn’t talk to him, or my seatmates in the Senate as well. So it’s his whim, whatever he wants to do, he does.

And so we have the legislation sitting there, waiting for us to work on it. The Democrats did not hear any of those bills, they just died in session. So we’ll bring them back this coming session. Or if there’s no special session, we’ll bring it back and try to curtail those emergency powers.

What I’d like to do is say after maybe 30 or 45 days, then you start working with the Legislature on the different rules and things that need to happen during an emergency.

AK: What would a more functional relationship between the Legislature and the Governor’s office look like to you?

AY: The problem right now, in my opinion, is I think that in a two party system, it works really well when the numbers on both sides are similar. So if they’re at 51 members, and we have 49 members or whatever that number is. That’s where it works best, because both sides have to negotiate a better deal. And they have to work with each other in order to come up with something that makes sense to everybody. Right now in the House, we’re sitting at 41 Republicans and 57 Democrats, so they can do whatever they want, whenever they want, because they’ve got the numbers. So I think what needs to happen is the voters need to realize that you have to have almost a split House, that way people are negotiating for both sides and not one party rule.