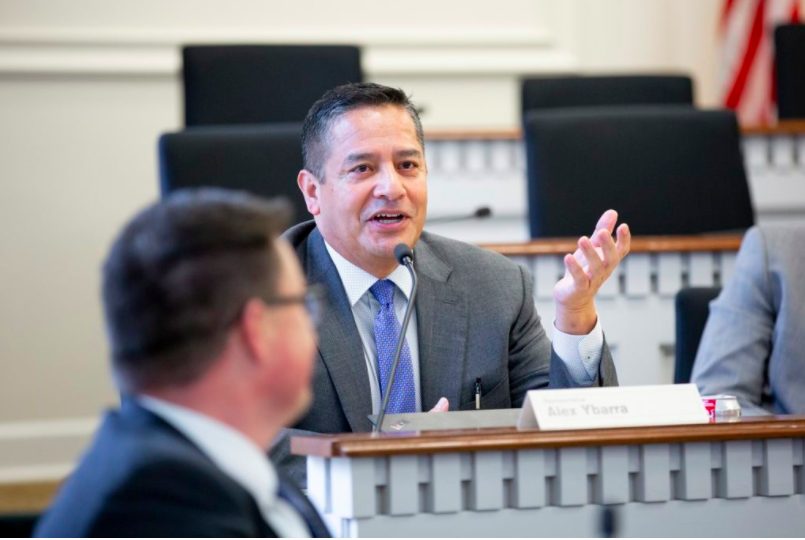 While Hansen is the prime sponsor of this bill, the Wire reached out to Ybarra to hear about why he’s willing to eschew ideological opposition among some in his caucus to making broadband a public utility.

Born and raised in the district he now represents, Ybarra is well acquainted with the issues that face rural Washington. I spoke with him about what the Public Broadband Act does, why he supports it, and who will pay for it.

Michael Goldberg: HB 1336 grants broadband retail authority to public utility districts. Can you talk in-depth about what this bill will accomplish?

Rep. Alex Ybarra: We knew prior to covid that most rural areas are in need of broadband. It’s just a matter of how you get it out there. For years and years, we’ve been hoping that the Comcasts of the world would get it out there, but it wasn’t feasible for them to do that.

I’m from Quincy Washington, which is an area with many pockets of no broadband access. So I got lucky enough to work with Rep. Hansen and he proposed this bill, which would allow PUD’s to do retail. What that means to me is that if some PUDs are able to do retail, they have to build up the infrastructure as well.

With covid hitting, it only further exemplified that broadband is like a utility – it’s required. From Rep. Hansen’s standpoint, I think he would want broadband to become a utility like running water. For me, I just want to bring broadband out here. If that means we do retail, then that’s what we do.

I’m finding out that the PUDs in Western Washington don’t do what my PUDs in Grant County do. All we do in Grant County is electricity generation and distribution whereas over on this end of the state, some PUDs do water and electricity. So each utility is a little bit different and they need the regulations to conform to them if we want them to do broadband.

AY: I haven’t spoken to Rep. Kraft about those comments or this bill. For me, it’s not so much ‘should it be a utility’ or ‘should it not be a utility.’ I just want broadband. I think she’s got a little bit of a point there where when you have a utility, you’re socializing the costs of bringing that utility to a particular population. So I think that might be what she was talking about, but I’m not sure.

From my standpoint, I never knew that broadband could become a utility for a district. The first time I had heard about that being a possibility was when I got the bill, which was probably the Thursday before session started. I got a call from Rep. Hansen and we started talking about it. I said, ‘If this is the way I can get broadband to my rural areas, then let’s do whatever it takes.’

I’ve got Kittitas County, most of Grant County, North Yakima County and Lincoln County. We’ve got the most desolate little towns in the whole state. Poverty levels are high and people don’t live close to each other because they’re mostly on farms. When you have that small population, infrastructure just doesn’t lend itself for broadband to be out there. It just doesn’t pencil out to put a new cell tower in the middle of Lincoln County because it only services a few hundred people. If you’re a telephone company, why would you spend $10-20 million to put a tower up to only service a few hundred people? It doesn’t pencil out for them so they don’t do it. That’s the dilemma that my district sits in.

After reading through this bill, I felt that this approach might be able to bring broadband to those rural areas. One thing about me is that I was a school board member for eight years, so I’m just about the kids. The kids need broadband right now because of covid and if this is one way of bringing it to the masses, I think we need to try.”

MG: Covid has undoubtedly increased the urgency for expanding broadband access. How much has the pandemic catapulted this issue ahead of others?

AY: It was definitely picking up speed before the pandemic. I know Rep. Mary Dye has been pushing really hard, working with the federal government as well, to bring broadband to her area. Myself as a school board member and part of leadership of the Washington State School Board Association, we’ve been pushing really hard for eight years. I think even before covid, it was going to happen; it was just a matter of when.”

MG: One of your Senate colleagues said that enhancing broadband connectivity around the state may end up burning though a large portion of the capital budget. How much of a priority should broadband be when stacked up against a long list of other line items?

In my county, the Grant County PUD put in fiber infrastructure across the county for data and communications purposes for the electric utility. It’s basically a giant pipe in the ground that has fiber in it, mostly for electric generation and distribution purposes. When that backbone was put in, somebody smarter than I said ‘can’t we just get get a line from that giant pipe over to my house and get fiber broadband to my house.’ They ran with this idea and now most of my county is fibered up.

When we talk about capital funding and infrastructure build out, that’s where we’re going to need the dollars. We’re hoping from the way the bill is structured that much of the broadband infrastructure could be federally funded. I’m sure we’re going to need a little bit of state funding here and there, some of which is already allocated,  but I think most of the dollars will be federal.”

AY: The good thing about this bill is that it isn’t mandatory. It’s not as if county PUDs will be required to build out broadband if this bill passes. I didn’t want this to be a mandate because some communities may not want it. They may not want the build out cost of doing it, or the PUDs may not want the infrastructure to get it done. Maybe they have a different solution. If it was a mandatory bill I wouldn’t be signing on.”

This interview has been edited for clarity and length