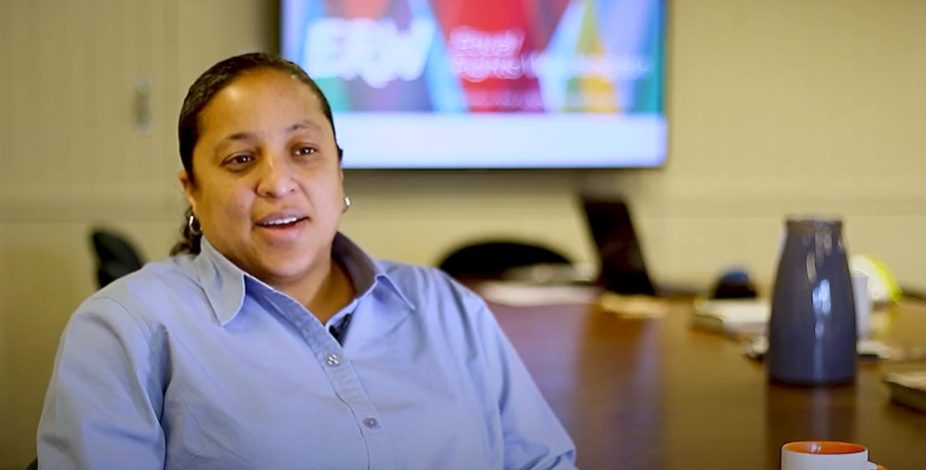 Q&A: Monisha Harrell on the policy aims of the Washington for Black Lives coalition

On Monday, several Black-led organizations announced the launch of Washington for Black Lives (W4BL), a new coalition that will aim to combat police violence in communities throughout Washington State.

Formed by Black member organizations of the Washington Census Alliance, the coalition has three stated goals: increased investment in Black and Brown communities; defunding of police and prisons; and demilitarization of local and state police. Thirty-eight Black-led organizations across the state have joined the coalition.

Monisha Harrell is the Chair of Equal Rights Washington – one of the W4BL’s founding organizations. She is also a member of Gov. Inslee’s task force to provide recommendations for legislation on independent investigations involving police use of force. I spoke with Harrell following the launch of W4BL about the coalition’s policy demands and organizing strategy.

Michael Goldberg: Under the “Defund police and prisons” portion on the W4BL website, it says “We demand that Washington State redirect funding away from police and prisons, and toward community-centered public safety.” It seems that “defund the police” still carries two different definitions. There’s a definition that points to redirecting funds away from bloated police budgets to social services, and there’s a definition that is closer to police abolition. Given that W4BL is using the former, I’m curious if that’s a strategic choice or if you think that stance is the better policy?

Monisha Harrell: The conversation right now is around defund and this our position on that particular policy. You know, a dollar on education will save you ten dollars in the criminal justice system. So it’s really about more strategically directing our resources to reflect the values that we actually want to see as a community. Quite honestly, we do believe in defunding, we’re not saying abolishment, but defunding our prison and criminal justice systems and putting those investments upstream to be able to support the Black community’s growth and prosperity.”

MG: The coalition is launching in the context of rising crime rates and gun violence in cities. What challenges do you think this context presents to how W4BL approaches making demands?

MH: It depends whether your question is about how we position right now versus how we may position in the future. Right now, we are really focused on the issues that are most urgent at this moment. As we work through solutions, our positions may shift and change to the things that are most important in that moment. An example would be, as Board Chair for Equal Rights Washington, we did a lot of work towards marriage equality. We initially did a lot of work towards nondiscrimination protections. As those goals have been accomplished, our work and the movement have evolved, and it’s the same with Washington for Black Lives. Our work will evolve, but right now the thing that is most pressing for us is to ensure that Black and Brown communities have the resources they need in order to have a more level playing field for success and growth.”

MG: In June, Rep. Jesse Johnson mentioned that he plans on introducing a police reform bill when the Legislature reconvenes, but one bill may not be likely to contain every provision the coalition would like to see enacted. As a matter of prioritization, what policy goals should legislators zero in on as they engage with stakeholders and attempt to meet community demands?

MH: We know that with COVID and the budget crisis coming from that, the Legislature is going to try to balance the budget in many different ways. One of the things that Washington for Black Lives will work to ensure is that the budgets are not being balanced on the backs of Black and Brown people. We want to make sure we don’t have these dramatic budget cuts that leave things like policing and prisons in full tact while cutting budgets for education, jobs, and opportunity for minority-owned businesses. If cuts are going to be made, we as a community need to be speaking about where those cuts should be made.  If you cut from education today, you are going to pay for it in 10-15 years. Ensuring that we are keeping our communities as whole as possible around services will ensure we have less of a problem going forward.”

MG: I’d like to ask about the specific areas in which you’d like to see legislators go upstream. Should envisioning new programming be the focus right now, or should the work center around shoring up existing programs amid a difficult financial climate?

MH: I think amid a difficult financial climate what we are looking for is to protect advances that have been made. There’s not going to be a whole lot of “new” we can achieve this year. We are vision focused, but we are pragmatic. That’s what you’ll see with the groups that have brought themselves to the table around this coalition. We know this is going to a really tough year for anything that would require new revenue. But there are things that the state can do that actually support Black and Brown communities. I’ll give you an example.

Despite the fact that we still are burdened by Initiative 200, we weren’t able to repeal that, there can still be efforts made by our government to ensure that state and federal contracting dollars are provided to minority-owned businesses. That’s really simple. It’s making sure that your outreach plan for these projects includes enough notice for underrepresented businesses to be able to have a shot at a fair bid. That doesn’t require a lot of money, that’s just mindfulness. Every time there is a recession, the government looks at how to stimulate the economy. As a legislator, you need to ensure that when you’re looking to stimulate the economy, you’re looking to stimulate the economy for all people. Washington for Black Lives will be sure to advocate for a stimulation of the economy that includes Black and Brown communities.”

MG: From an organizing standpoint, and I realize there’s a lot of literature on this, but from your perspective, what circumstances do you think will be most conducive to seeing the coalition’s demands met? More to the point, will pressure from the outside, continued protests, etc, be the essential factor that moves the needle going forward, or is a more conducive climate for policy change one in which the issues at hand are not at the center of the national discourse?

MH: Washington State is a strong ecosystem and that ecosystem relies on those who can contribute in the ways they can contribute. For those who are able to get out and protest and have their voices heard, they create a climate where legislators are willing to sit down and respond. We need everybody doing what they do in order to ensure change is made. Some people are good at sitting down and drafting and critiquing policy. Some people are good at being visible and making their voices heard in the streets that way. None of it gets done without the other. It just doesn’t function if you don’t have every single part of that ecosystem working. If the protests were to end, we would go back to business as usual. We know that, the legislators know that; that is widely known. Nothing will change unless the change is being forced and brought to the forefront. This is the moment where the ecosystems are all working together and we have to move these policies forward.”