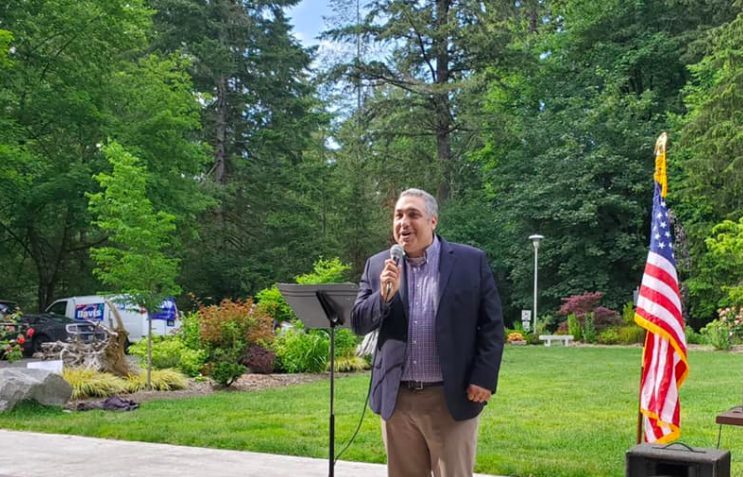 Jackson Maynard is a Republican candidate for Congress in Washington’s 10th District.

An attorney by trade, Maynard previously worked as a prosecutor, practiced construction law while representing a state transportation agency, and advised the Washington State Senate on laws regarding courts and transportation for eight years. He currently serves as the General Counsel of the Building Industry Association of Washington.

Eight days before the polls close in Washington’s August 4th primary, I spoke with Maynard by phone for an update on his campaign. We discuss his COVID relief plan, the characteristics of the 10th Congressional District , President Trump, and criminal justice reform.

Michael Goldberg: Can you give me an update on the state of your campaign and your expectations heading into the final week of primary voting?

Jackson Maynard: I’m thrilled at the momentum we’ve got coming into this primary. There are a number of factors that give us reason for encouragement. First of all, I’m leading in fundraising among the Republican candidates, according to the most recent FEC reports. Not only do I have more in terms of donations, but I have more cash on hand that will enable me to reach out to voters with our message. I’m also leading in endorsements. I’m honored to have the support of not only Dino Rossi and Rob McKenna, but also nine state senators and three Republican House members, two county commissioners, and a school board member.

Finally, I’m the only candidate with a consistent and clear message on the number one issue on people’s minds according to all the polls, which is the COVID crisis and how we recover. I’ve laid out a clear plan called HIT (Housing, Infrastructure, Technology) as a way to hit back against the effects of the virus.”

MG: If elected, you could have a hand in negotiating a future COVID relief package. Senate Republicans released their plan today and it would – in addition to providing funding for PPP loans, expanded testing capacity, and more – set enhanced federal unemployment insurance at 70% of a worker’s previous wages, reducing the $600 per week which states stopped paying out this week to $200. Do you support this revision and do you think state unemployment agencies, particularly the embattled Employment Security Department (ESD) here in Washington State, can handle processing that revision?

JM: I need to look at the details of that proposal before I comment on it. I have reviewed the proposal that came out of the House and I think there are some good things in it, like support for state and local governments. But there are some things I have concerns about. And that’s the case with all Christmas tree bills, as we like to call them in the legislature – everybody puts things in them and you begin to lose the overall purpose of the legislation.

I understand why we’ve used stimulus as a tactic to deal with the immediate effects of the virus but I’m concerned with the use of that as a long-term option. That’s why I think infrastructure improvement is a much better way to go about providing relief. Not only do you provide jobs and revenue to state and local governments, but you also have something tangible that can benefit the district. We have tremendous infrastructure needs in the South Sound. Everybody has been stuck on I-5. If we use creative transportation options in terms of expanding passenger ferry service, additional road projects, making Olympia a regional airport again – there are things we can do for the amount of money we’re spending at the federal level that would dramatically improve folks lives in the 10th Congressional District.

So I understand why stimulus, particularly the $600 payments have been what they’ve looked at until now, but I’d be interested in looking longer term and finding ways of using those dollars for infrastructure and housing construction – as we did during the last recession.

Since you mentioned the ESD, I’ve heard from a number of constituents that are extremely frustrated with the lack of accountability for that office. Apparently, now they are going to backfill that amount by increasing the tax rate businesses pay for unemployment insurance. That is outrageous and it demonstrates the flaws of using stimulus as a way to combat these issues as opposed to a works projects procurement process or other ways where we can make sure dollars are better spent.”

MG: Just to be clear, when you differentiate between stimulus and a works project, are you saying that funding for a works project should be included in lieu of direct payments or boosted unemployment benefits? How exactly are you defining “stimulus” here? Are you just referring to checks going out to people?

JM: Fair question. I’m defining stimulus as sending checks to people, as stimulus has taken that form in response to this current crisis. I see it as bandaid. It’s important in the way that bandaids stop bleeding, but it is not a long-term solution to get the country, the state, and the district out of the economic crisis. I think future packages should absolutely consider including an infrastructure package as a part of the stimulus.

MG: The 10th CD is generally thought to be a Democratic District. Rep. Denny Heck won by comfortable margins each cycle he ran for reelection. How do you overcome that and become the first Republican to flip this seat?

JM: It is not a Democrat District, it is a swing district. If you look at the last presidential election. It only went for Hillary Clinton by 51% of the vote.

It went for Kim Wyman by 60% of the vote. This is a district that is absolutely open to common sense bipartisan messages. It is certainly not a Democrat stronghold, as I think a lot of Seattle-based political folks would have you believe.

I feel very good that I have a plan, each element of which has been endorsed by both sides of the aisle. Housing construction is something that Denny Heck championed. While I disagreed with him on some of his other votes and policies, my hat goes off to him in terms of advocacy for more housing of all types, as fast as possible. Infrastructure packages have been discussed by both President Trump and Nancy Pelosi. Technology, in terms of expanding the ability to respond to emergencies, expanding the use of online options for schools, and telemedicine are things that there have been bipartisan proposals on for years. I think people in this district are sick of the political games as usual and are looking for someone who can get things done on both sides of the aisle.”

MG: Getting things done on both sides of the aisle may require you to cast votes or make statements that could be unpopular with the base of your party. Do you support President Trump?

JM: I support the President on some important matters. For instance, the pre-COVID economy and deregulation. I like the fact that he’s made appointments to the federal judiciary a focus. I would point out that in the Western District of Washington, we are five judicial seats short, in part because our US Senators have failed to approve the appointments that were suggested for those seats. So, I like what the President has done on those aspects. I certainly don’t agree with every tweet. Frankly, I don’t think the President agrees with every tweet he makes. I think my job in Congress will be to be the voice of the constituents and the voice of the district.

To the extent that I can work with the President and support him on issues, I want to be able to do that. I don’t think you’ll hear this from any other candidate, but I’d even be willing to work with Vice President Biden if he gets elected. I’ll work with him to the extent I can on bipartisan COVID relief. Most of the other proposals by the other 18 candidates in this race are proposals that will die in the other chamber or be vetoed no matter who gets elected president. I’m the only candidate with a bipartisan platform that has the potential to be supported no matter who gets elected. But I do not view support for President Trump as a binary. I agree on some things and on others I respectfully disagree.”

MG: Have you decided who you are going to vote for?

JM: Yeah, I’m going to vote for the President. Like I said, I support what he’s done in funding for our military, deregulation, and in judicial appointments. I do not think that the Vice President’s platform is one that would benefit the country, so I’ll be voting for President Trump.”

MG: You have experience with criminal justice policy as a former prosecutor and as an attorney in the Florida House of Representatives and in the Washington State Senate. What is your reaction to the recent protests and what policies do you support, or oppose, regarding police reform?

JM: I absolutely support peaceful protests. I think there’s an important national dialogue that is being put forward about the best way for police to do their work and how to hold police accountable when they don’t do that work effectively. I support those who are engaged in peaceful protest to raise those issues. I do not agree with the line of thinking that we need to defund the police to accomplish criminal justice reform. I think that makes about as much sense as trying to defund firefighters to prevent fires, or defunding doctors to prevent illness.

The 99% of police that I dealt with as a prosecutor were terrific public servants who were just trying to serve and protect the communities in which they worked. The answer to making sure they do their job well is more resources, not less. It’s gonna take more resources to ensure that salaries are competitive, that you can higher well-qualified police officers and give them the training and tools they need to do their jobs well and hold other officers accountable. That will take more resources. So I think defunding the police is the wrong message for criminal justice reform.

This conversation has been lightly edited for clarity and length.