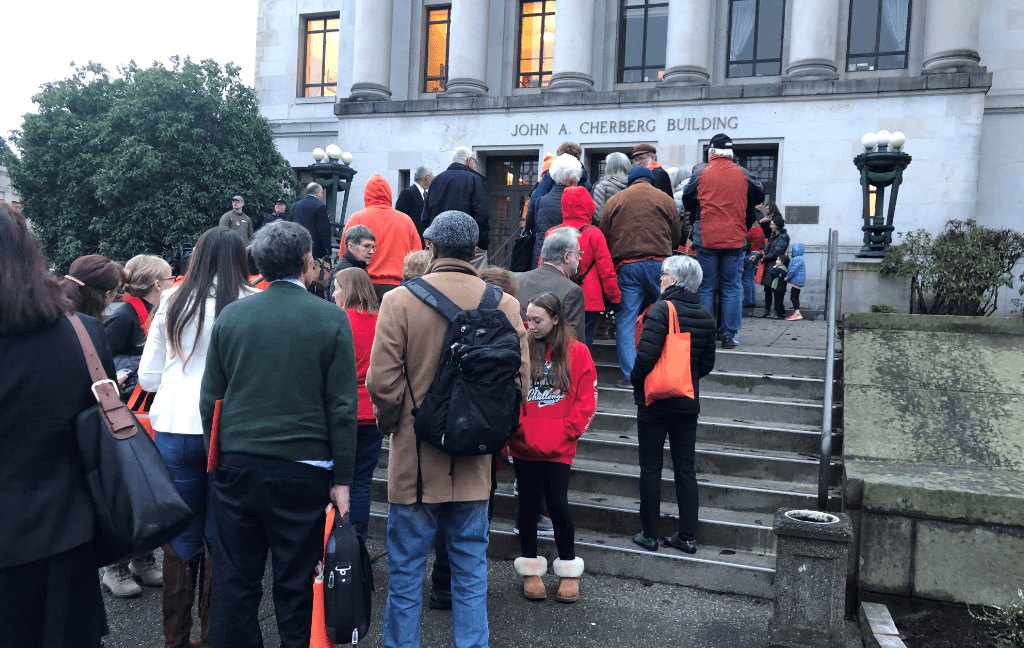 Public weighs in on gun bills

Almost two hours before public hearings were set to begin this morning on four bills relating to firearms, the line to get in was out the door.

“Two issues draw this kind of crowd,” the security guard monitoring the growing line outside the building said. “Guns and abortion rights.”

Early on in the meeting, Sen. Jamie Pedersen — who chairs the Senate Law & Justice Committee — said “well over 1,300 people” had signed in to testify so far.

Two of the bills at-issue today were requested by Attorney General Bob Ferguson:

One bill would ban undetectable firearms and untraceable firearms, often called “ghost guns” — it’s a bill aimed at plastic guns that can be 3D-printed. In August 2018, a federal court judge in Seattle blocked the online release of blueprints for Defense Ditributed’s 3D-printed guns, as a result of a suit filed by Ferguson and 19 other attorneys general.

“One thing this bill addresses that is not a part of that lawsuit, is that [Defense Distributed], which is owned by a self-described ‘crypto-anarchist’ can email the blueprints for a 3D gun to somebody without doing a background check,” Ferguson said.

The other bill Ferguson requested would ban most magazines that hold over 10 rounds of ammunition, which the bill refers to as “large capacity magazines,” and which people in opposition to such limits often called  “standard-capacity magazines” during public testimony. Under the bill, anyone who has a gun that would be banned after the bill goes into effect would be allowed to keep it.

A federal law that limited magazines that can hold 10 or more rounds expired in 2004; at least nine states, according to the bill report, have since placed limits on magazine capacity, “generally with a limit of 10 to 20 rounds.”

The other bills heard were not requested by Ferguson. The third bill would require law enforcement to take guns that “the officer has reasonable grounds to believe were used, or threatened to be used, in the commission of a domestic violence offense.” And the final bill heard would set training requirements for an applicant wishing to get a concealed pistol license.

Testimonies both in favor of and in opposition to the bills were emotionally charged, with many people — on both sides of the bills — sharing personal stories of encounters with violence.

The hearing is available to watch on TVW here.