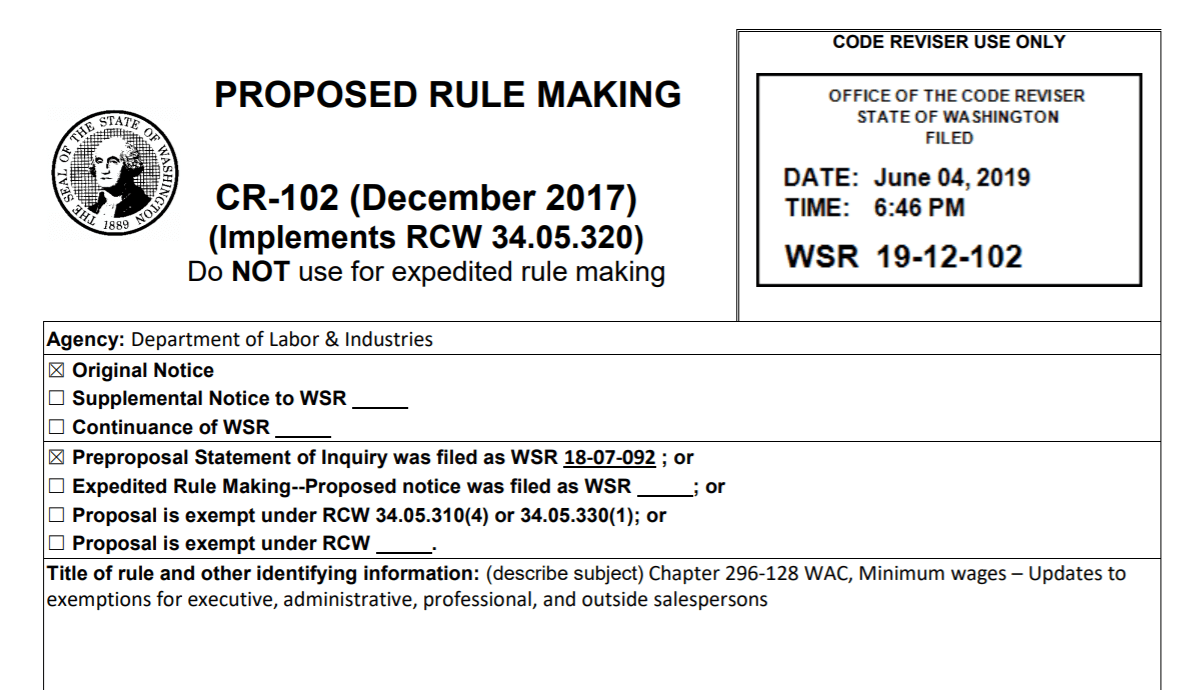 This press release was provided by the Washington State Department of Labor & Industries.

The Washington State Department of Labor & Industries (L&I) has formally filed a proposed rule that would restore overtime protections for thousands of Washington workers. The proposed changes would significantly increase the minimum amount employees must earn before they can be exempt from receiving overtime pay.

The proposal also updates the test used to determine who qualifies for the overtime exemption, and more closely aligns the state rule with federal standards.

“Americans are working harder and longer than ever before and overtime protections ensure that workers are fairly compensated. That’s why I asked the Department of Labor & Industries to update Washington state’s overtime rules,” Gov. Jay Inslee said. “I thank L&I for their work to update the system that will benefit hard-working Washingtonians and their families.”

The agency will hold public hearings around the state throughout the summer and offer other opportunities for people to provide input.

Washington’s overtime rules, last updated in 1976, haven’t changed in more than 40 years. During that time, the percentage of “white collar” workers who are considered exempt from overtime and other worker protections has grown substantially. Meanwhile, the minimum amount exempt workers must earn in the state has remained unchanged. As a result, some salaried workers can be paid less than minimum wage, don’t receive overtime, and are not entitled to paid sick leave.

“The current system is out of date. It’s at risk of failing tens of thousands of workers by broadly defining what a white collar worker is, which allows businesses to pay salaries that may be even less than minimum wage,” said L&I Director Joel Sacks. “That’s especially true for employees who are expected to work well over 40 hours a week, but don’t get paid overtime.

“We want to make sure that people who legitimately deserve overtime get paid for the extra hours they work,” said Sacks. “Washington’s minimum wage has been updated repeatedly for decades; this hasn’t been. This proposed rule links future salary thresholds to the minimum wage.”

The formal proposed rule is the next step in a multi-year process that has involved two pre-draft rules, multiple public feedback sessions, and several meetings with business, labor, and nonprofit representatives to exchange ideas.

Washington employers are currently using the federal threshold, which allows salaried workers to be “exempt” from overtime if they perform certain types of work and are paid at least $455 per week, or about $24,000 per year. The current state threshold, which was last updated 43 years ago, sets a level that’s even lower, at $13,000. Washington’s proposed rule calls for restoring the protections by setting higher salary thresholds set as a percentage of the state minimum wage. Increases would be phased in over several years depending on the size of the employer.

Those amounts would increase yearly based on a formula that uses the state’s minimum wage. The changes could impact more than 250,000 workers by 2026. At that time, exempt salaried workers would have to be paid at least 2.5 times minimum wage and meet the job- duties test.

Simplifying test to determine if an employee can be considered exempt

Along with updating the required salary threshold, the proposed rule would change the method used in Washington to determine if an employee is doing work that allows them to be classified as exempt. The state currently uses two “duties tests” to make this determination. Under the proposal, they’d be combined into one test that would align more closely with the method used at the federal level. The change would make the process simpler for employers, and increase the likelihood that workers are correctly classified.

With the release of the draft rules, L&I will now begin gathering more feedback from stakeholders through a formal rulemaking process, including public meetings and a public comment period beginning June 5 and ending September 6, 2019. L&I will consider all input we receive in preparing a final rule.

“We know we’re proposing a significant change, and it’s important to have a serious discussion and hear all views,” said Sacks.

Check the Overtime Rulemaking web page for details on this public hearing schedule:

The formal rulemaking process could take up to six months. More information about the proposal is on the Overtime Rulemaking web page. L&I expects to adopt the rule in late 2019.