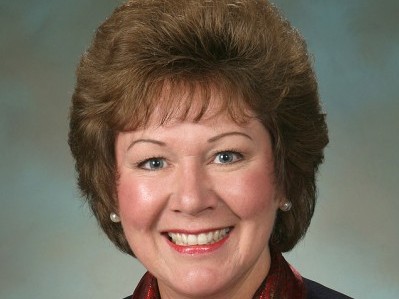 Write-in Plans are Thwarted – Republican Senator Accepts Gubernatorial Appointment in Time to Withdraw, but Too Late for Party to Find a Replacement 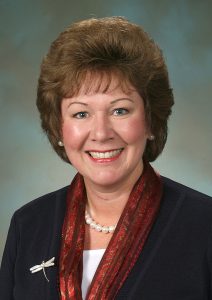 OLYMPIA, May 24.—It all depends on your perspective, of course, but the way it looks to most folks at the statehouse, Cheryl Pflug’s exit from the state Senate is either the most masterful political play in recent memory or the smelliest deal since Teapot Dome.

There don’t seem to be many neutral views on this one. On Monday Pflug notified the secretary of state’s office that she would be withdrawing her candidacy for re-election in the 5th Legislative District. The Maple Valley Republican is accepting an appointment from Democratic Gov. Christine Gregoire to the Growth Management Hearings Board. It’s the kind of honor anyone would find hard to refuse. Salary for the position is $92,500 a year, and it runs six years.

Any other time, you might hear hosannas to bipartisanship, and Pflug’s fellow Republicans might even have brought a bottle of nice champagne to the farewell party. She’ll be lucky to get Andre. Pflug’s withdrawal came during the final minutes of the single day of the state’s four-year election cycle when it was possible to make hash of G.O.P. plans to regain the majority in the Senate. It’s too late for anyone else to file.  Democrats already have a strong candidate in the district, Issaquah city councilman Mark Mullet. Although a lone Republican had filed a challenge to Pflug, mortgage broker Brad Toft of Snoqualmie remained an unknown quantity in Olympia this week, and party officials were unsure whether they would throw him their support. Truth be told, no one at the statehouse had even bothered talking to him. It was a matter of party loyalty. They were solidly behind Pflug.

So now the entire Republican camp is stunned. Looks to many like a pretty bald-faced deal – a half-million dollars for a Senate seat, and using taxpayer money to boot. “I guess that’s the price of her soul,” says state Republican chairman Kirby Wilbur.

It also might be the price of maintaining Democratic control of the Senate.

One Person Can Make a Difference

The margin is narrow in the state Senate; Democrats have 27 votes to the Republicans’ 22, and a shift of just three seats this November could change party control for the first time since 2004. Those are the numbers statehouse partisans have pondering for the last two years. Normally they try to change them the old-fashioned way, by recruiting candidates, targeting incumbents, and watching carefully for any hint that a member might be thinking of moving on, thus creating the biggest prize in any election cycle, an open seat.

Republicans have been laying plans for months and they say Pflug never gave them a clue. True, she hadn’t raised a dime for her re-election campaign. But state Sen. Mark Schoesler, R-Ritzville, chairman of the Senate Republican Caucus Campaign Committee, says that as recently as last Thursday Pflug appeared at a caucus fund-raiser and made a strong pitch for support. 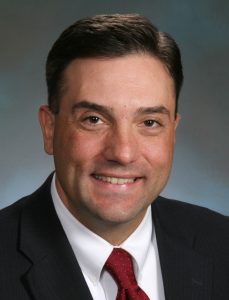 Pflug filed for re-election during last week’s filing period. After 5 p.m. on Friday, no one else was able to submit papers and win a spot on the ballot. Monday was the last day for candidates to withdraw. Pflug took her name out of the running just before the close of business.

By the evening hours the phone lines between Olympia and the suburban King County district no doubt burned hot enough to melt the insulation. Next morning the word was that state Rep. Jay Rodne, R-North Bend, might be interested in running as a write-in. But no dice, because he had already filed for re-election to the House.

“We got a lot of calls from people who wondered if Jay Rodne could run a write-in campaign for that seat,” said David Ammons, spokesman for the secretary of state’s office. “But he can’t, because state statute says you cannot be on the ballot for more than one office, and he is past the deadline for withdrawing.”

Rodne did not return a call from Washington State Wire Wednesday. 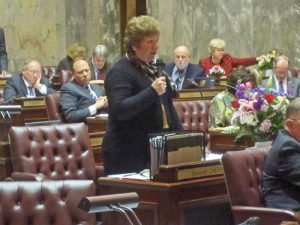 Pflug rises to support the Senate Republican Caucus during the dramatic floor battle on March 2.

Sometimes things are just what they seem to be, Pflug says. It was an once-in-a-lifetime job offer, and of course she said yes. “It is just a great opportunity for me, because I just graduated from law school, and it is a really interesting, kind of complicated area of law, and it kind of fits with my district issues as well. I have represented a district for 14 years now that straddles the urban-growth line, and you constantly have to decide how do you protect the natural environment and make room for people? So this is something I really can’t pass up.”

There was no back-room deal, Pflug says. Sure, she didn’t let her colleagues know she was interviewing, but she says, “I don’t think I was the only Republican senator who applied for it.”

And it certainly wasn’t worked out in advance, she says. In fact, she was getting a little nervous by Monday, when the governor’s office hadn’t told her yea or nay. She would have to withdraw from the race in order to serve on the board, and that deadline was looming at 5 p.m. Pflug says she got the call in the afternoon. “People can look at my phone if they want and see what time the governor called.”

Yes, there’s plenty of chatter about this one, she acknowledges, and perhaps not the nicest. Part of the reason is that Pflug has always been seen as something of a swing vote, willing to reach across the aisle and deal with Democrats. She has never been in synch with the social-issue platform many of her colleagues hold dear. Pfug has always been an advocate for abortion rights, and this year she became the second Senate Republican to announce her support for gay marriage, after Steve Litzow of Mercer Island. She also backed a Medicaid-fraud bill that many Republicans opposed, following heavy lobbying by the pharmaceutical industry. When a coalition of Republicans and three Democrats took over the Senate this year with their dramatic vote the night of March 2, there was much speculation that the Dems were trying to convince her to vote on their side.

“That was really strange,” Pflug said. “I mean, I was one of the hardest core members in the caucus.” And she points out that she made a speech for the Republican team on the floor that night.

But her filing last week offers one sign that maybe she wasn’t completely on board with the party leadership. When it came time to declare party preference, she identified herself as an “independent Republican.”

‘Not the Preferred Scenario’

When word got out Monday night about what Pflug had done, within the state’s political circles there were calls and text messages and emails and tweets galore. Democrats sent smiley-faces. Republicans and lobbyists were calling it the lowest thing they’d ever seen. Because of the rather genteel nature of politics, you don’t find many of them willing to go on record about it.

Senate Minority Leader Mike Hewitt, R-Walla Walla, is willing to admit dismay. “I’m very, very disappointed in the timing,” he said. “I don’t know whether she did it or the governor did it, but I’m very disappointed in the timing. We didn’t have time to do anything. But you know, I wish [Sen. Pflug] well. She has kids in college and she needs to make a living, and she’s been looking for a job. I just didn’t anticipate this.”

Schoesler says the Senate Rs knew they were going to have spend big money to defend Pflug this year. But certainly it would have been easier to keep the seat with an incumbent in place. Now they have to decide whether to shift their backing to Toft, or put their resources elsewhere.  “It was not the preferred scenario,” he says drily.

It should be noted that Republicans pulled off a filing-week maneuver of their own this year. Sen. Joe Zarelli, R-Ridgefield, decided not to run for re-election in the 18th Legislative District and didn’t announce it until after filing period had ended Friday night. But Republicans say there’s a big difference. Zarelli didn’t leave his party in the lurch. He made sure that state Rep. Ann Rivers, R-La Center, was prepared to step into his place. She filed ten minutes before the deadline, and so the only ones who were caught off-guard were the Democrats. No money was involved.

Also worth noting: The seat on the Growth Management Hearings Board is not subject to confirmation by the Senate. Pflug takes the position July 1.

To heck with the gloves, says state Republican chairman Wilbur. “Let me tell you what everybody is thinking, if they won’t say it. This was obviously pre-planned. This is betrayal, in my book. Cheryl knew she was going to do it and didn’t step aside to give the party a chance to get somebody signed up for that office who wanted to run. Jay Rodne would have done it, but she didn’t give us that chance.

“I think this is a deliberate attempt to sabotage the Republican Party, to give that seat to the Democrats. I don’t know how she sleeps at night.”

Wilbur notes the salary isn’t the only thing Pflug will gain. Her pension benefits will be goosed considerably by the appointment. Lawmakers are eligible for state pensions, and after six years on the board plus 14 years in the Legislature, Pflug will be 62 and entitled to generous benefits should she decide to retire from state service at that point. As a member of the PERS 2 program, Pflug’s benefits will be based on the average of her highest five years of salary – $92,500 – and not the legislative salary of $42,106.

“There is no question in my mind that Cheryl knew exactly what she was doing,” Wilbur said. “She sold her vote and her party down the drain for a five-figure state job, and it is pathetic. I mean, over six years, I suppose that is a lot of money. But I would have thought her soul and her principles would have come at a higher price.”