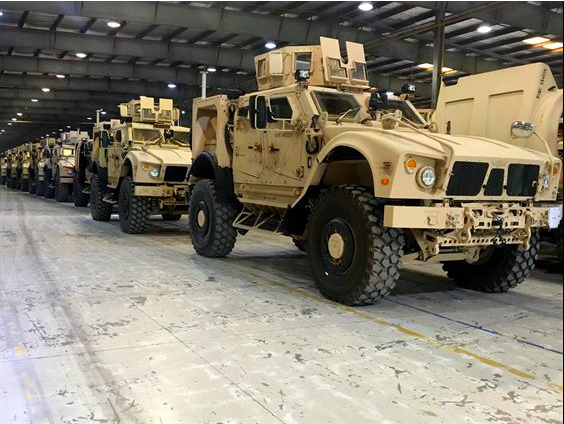 Among many other issues, the demonstrations following the killing of George Floyd on May 25th has made visible the widespread use of military equipment in police response to civilian protests throughout the country. Mine Resistant Ambush Protected vehicles – or MRAPs that are designed to withstand improvised explosive devices – are now a common sight in city streets. So where did they come from?

According to Radley Balko, author of Rise of the Warrior Cop, these vehicles have been handed over to small municipalities by the Pentagon with no training for how to operate them. “And they’ve been known to tip over,” he wrote in a Washington Post article in 2014.

The Wire looked at the data for excess Department of Defense property transfers for Washington State and compiled it in a spreadsheet.

The information is from a publicly available data sample from the Defense Logistics Agency Law Enforcement Support Office (LESO).

Known as the 1033 program, police departments and sheriff’s offices can request equipment as it becomes available. A kind of Craigslist of military equipment; the only expense is shipping.

The spreadsheet does not break out every city or county, instead highlighting ones that warrant further investigation. The Seattle Police Department did not appear on this list and the King County Sheriff’s Office has not had an MRAP allocated to them through this program. However, the Washington State Tactical Officers Program offers a lending program with parameters for use requests.

According to Amy Tsai, Deputy Inspector General of the City of Seattle, City of Seattle municipal code prohibits receipt of military surplus for law enforcement under the federal 1033 and other similar programs.

A review of the data statewide shows a disproportionate per capita allocation of excess military equipment. Aside from the 31 MRAPs throughout the state, equipment includes everything from dumb bells (the Moxee Police Department has 12 at $300/each) to assault rifles. As of March 2020, 487 5.56 millimeter and 161 7.62 millimeter assault rifles have been shipped to Washington State. (This may be due in part to the military’s efforts to offload heavier rifles in favor of something lighter).

One of the biggest anomalies of per capita military allocation can be found in Union Gap. Adjacent to Yakima and 78 miles west of the Hanford Site, this small town of 6,160 has received $1,294,494 in allocations including an MRAP since 2015.

A glance at the $492,185 in allocations Soap Lake received in just the last two years can likely be attributed to the 2,000-acre wildfire which struck the area in 2018. All vehicles and supplies appear to be related to wildfire suppression and rescue.

Compare this to Chelan County, another area commonly affected by wildfires, where the $1,624,729 in allocations dating back to 1996 includes two MRAPs, four helicopters, and 35 assault rifles. While Soap Lake has requested power saws and burn blankets, Chelan County hasn’t received any such equipment.

In a similar vein, Yelm near Mount Rainier has received $128,659 in supplies primarily related to mountain rescue operations. Contrast this to Whatcom County near the US and Canada border and home to Mount Baker Ski Area. Starting in 2002, the Whatcom County Sheriff’s Office has received $1,564,401 in allocations that includes two MRAPs, one armored truck, and an unusually high number of night vision apparatuses.

While no means definitive, this data is intended to help augment discussions around police militarization in Washington State.

Take a look at the data for yourself, here.