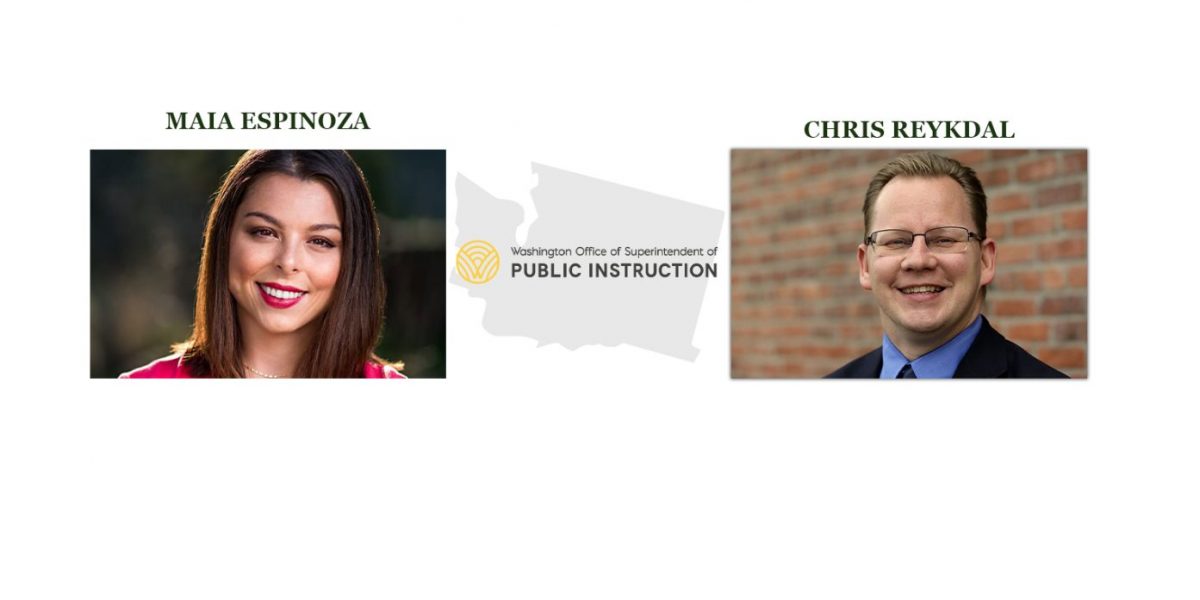 Washington Superintendent of Public Instruction Chris Reykdal and his general election challenger, Maia Espinoza, will face off on September 17th in a debate hosted by the Washington State Wire.

In the primary, Reykdal, a Democrat, won 40.24% of the vote in a field of six candidates. He’ll face Maia Espinoza, a conservative who ran for the state House as a Republican in 2018. Espinoza could pick up a significant number of votes from supporters of the candidates who didn’t advance.

The OSPI is technically a nonpartisan office, but the race has been animated by partisan divisions over the sex education bill that passed this session. The bill would require public schools to provide comprehensive sexual health education to students in grades 6-12 beginning in the 2021-22 school year and for all public school students, including those in grades K-5, beginning in the 2022-23 school year.

Opponents of the bill say it would create an “inappropriate, ideology-based curriculum” and that local school boards were not given enough of an opportunity to weigh in on the curriculum.

The bill’s sponsor, Sen. Claire Wilson, said portions of the curriculum designed for younger children have been misrepresented by the bill’s opponents.

This is about making sure younger children know what kind of touching is inappropriate, whether by peers or predators,” Wilson said. “It’s about helping older students recognize and resist abusive or coercive behavior. It’s about teaching all children to respect diversity and not to bully others.”

Espinoza said she was inspired to run for Superintendent after Reykdal and his office approved the curriculum set out in the bill. Furthermore, she said opponents of the bill have been mischaracterized: “We’re being referred to as flat-Earthers and Holocaust deniers because we’re concerned about the content that is being approved.”

The bill has remained a rancorous issue between the candidates. In June, Reykdal sued Espinoza over a sentence in her voters’ pamphlet statement which stated that he supported “a policy that teaches sexual positions to 4th graders.”

After a Thurston County Superior Court judge ruled in Reykdal’s favor and ordered the language removed, the decision was reversed by the State Supreme Court after Espinoza appealed.

The fate of the bill hangs in the balance, as opponents launched a successful effort to get a referendum on the ballot in November.

In addition to overseeing health education, the winner of this race will guide the state’s public education system through an unprecedented transition to remote learning for many schools as the pandemic wears on.

All in all, the OSPI oversees 295 public school districts and 6 state-tribal education compact schools.

Making his case for re-election, Reykdal’s campaign has pointed to the $4 billion per year pumped into schools by the state to shore up basic education; improved graduation rates for students from marginalized backgrounds; a 24% increase in average teacher pay; and program development for early learning.

After teaching high school history, Reykdal went on to serve as Deputy Executive Director for Administration and Finance at the State Board for Community and Technical Colleges. He entered electoral politics in 2009, serving three terms in the state House before being elected Superintendent of Public Instruction in 2016.

Espinoza is the Executive Director and Founder of the Center for Latino Leadership, a civic-engagement, education-oriented non-profit based in Washington State. She also served on the Race and Ethnicity Student Data task force at OSPI as part of the Opportunity Gap Oversight Committee and was Legislative Liaison to the Governor’s Commission on Hispanic Affairs.

The debate between Reykdal and Espinoza will take place from 7:00 – 8:00 PT on September 17th; following a nonpartisan and impartial format, with candidates given equal time to respond to a set of screened questions.

The public can view the debate for free, but advance registration is required.