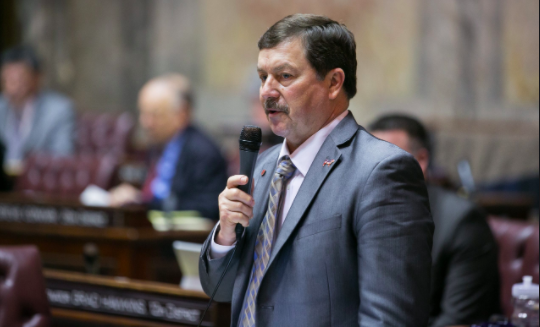 Op-ed: To be clear, here’s what Legislature can and can’t do with governor’s COVID-19 proclamations

Since the COVID-19 pandemic hit our state earlier this year, Washingtonians have done their best to cope with this terrible disease, which has caused about 12,750 confirmed cases and killed 711 patients in our state as of April 23.

During this pandemic, my fellow Senate Republicans and I have supported Gov. Jay Inslee and his executive-branch agencies when we believed it was warranted, as they strive to minimize the disease’s impact on Washingtonians.

While we have supported many of his proclamations, we believe some of the governor’s restrictions on Washington residents and businesses related to his stay-home order go too far and aren’t consistent. He has closed down several sectors of our state economy that could remain open without putting the workers involved at risk.

We appreciate that the governor’s stay-home order is intended to keep people safe from COVID-19 and eventually stop the spread of this serious disease. The health and safety of Washingtonians is our highest priority during this crisis. But we care about Washington’s economic health as well as its public health. That is why we not only have asked the governor to ease restrictions on those industries in which employees don’t work in close proximity and thus are at little risk of contracting COVID-19, but also have worked with our House Republican colleagues on creating a plan to safely start to reopen Washington’s economy. You can view that plan here.

Over the past several weeks we have received many questions about the governor’s “Stay Home, Stay Healthy” order, and whether legislators can lift it or extend it.

The short answer is no.

The stay-home order (formally known as Proclamation 20-25, as amended by Proclamation 20-25.1) was issued by the governor under state law (RCW 43.06.220(1)). As a proclamation made under this law’s subsection, the order is not subject to a 30-day time limit.

The governor’s original stay-home order expired on April 8, but he extended it until May 4. The governor might choose to extend the order again. What is important for people to know is that the emergency-powers law under which his order was issued does not give the Legislature the opportunity to determine whether the order should be extended.

Under another subsection in the state law dealing with emergency powers (RCW 43.06.220(2)), some other emergency proclamations do expire after 30 days – and the Legislature does have a role in whether to extend those. When the Legislature is not in session (as now), the legislative leaders of the four caucuses – Senate Republicans, Senate Democrats, House Republicans and House Democrats – can grant an extension for some orders issued under this law.

During the pandemic, other legislative leaders and I have extended 19 proclamations that were set to expire and are subject to review.

My fellow legislative leaders and I agreed to extend certain proclamations because they would provide financial or regulatory relief to our state’s residents during this difficult time when so many Washington families already face a financial burden caused by the pandemic emergency and resulting stay-home order.

Some of those include suspending the accrual of interest on unpaid taxes, waiving the waiting periods for unemployment benefits, and relaxing continuing education requirements to provide flexibility for healthcare workers. In each case our caucus first carefully examined the proclamation and concluded that an extension was warranted. Our caucus has not authorized an extension beyond May 4 for any of the governor’s proclamations over which we have a say.

I hope this explanation about the governor’s proclamations will help people better understand what the Legislature can and can’t do regarding them.