George Caan, Executive Director of the Washington PUD Association   May 29, 2019

George Caan is the Executive Director of the Washington Public Utility Districts Association. Caan submitted the following op-ed regarding action on SB 5116 — the bill requiring Washington electric utilities to transition to a 100% carbon-free electricity supply by 2045 — now that it has been signed into law.

A 100% clean energy bill passed by the legislature and signed by the Governor guides the state toward a 100% carbon free electricity grid, but its intended outcomes can easily be derailed if the law is not carried out in the spirit in which it was developed.

This law required an exceptional amount of stakeholder input. Public utility districts were engaged throughout the process and are grateful for the thoughtful consideration given to our ideas, many of which were included. The bill signed by the Governor reflects a balance between stakeholder fundamental positions and compromises that must be implemented with thought and care to achieve the law’s stated goals.

The challenge in developing the law was setting the stage for carbon reduction in the electricity sector without undermining the reliability of the grid or imposing an undue financial burden on the citizens, businesses and industries of Washington, especially those least able to pay escalating costs. An important key to meeting this challenge was recognition of the critical role our state’s most abundant renewable resource, hydropower, will play in our pathway to a 100% clean grid.

It is necessary to keep the “lights on” when energy needs peak, such as during the prolonged cold snap that occurred early this year. Hydropower fills the gaps in wind and solar renewable generation – when the wind doesn’t blow or at night; it throttles up or down in response to variations in renewable generation due to conditions such as wind gusts or clouds, or to match daily peaks and valleys in energy use. Hydropower is nimble, it ramps up and down within minutes or even seconds to keep the electric grid in balance preventing brown outs. Hydropower is both dependable and predictable (able to meet energy needs 24/7), and it is a relatively low-cost renewable energy resource.

As state agencies began rule making and implementation of the law gets underway, it’s more important than ever to make sure the foundation on which the law is built, including recognition of the value of preserving and maximizing our existing hydropower resources, guides our actions. Washington public utility districts are looking forward to work to ensure execution of the new law reflects the good faith work that went into its development. Our 100% clean energy future depends on it. 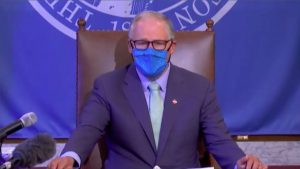