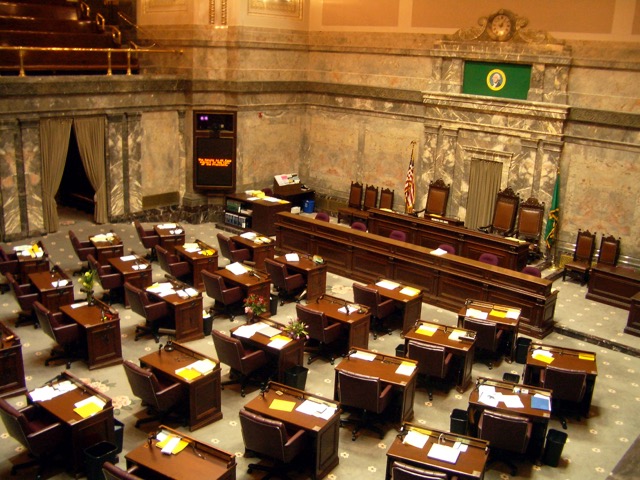 Op-ed: Is an income tax on special session agenda?

TVW recently interviewed the top budget writers in the Senate about the state’s budget outlook and the possibility of a special session. In one interview, Sen. Braun (ranking member of Senate Ways & Means Committee) said that the Governor needs to re-open the state employee contracts to cancel the 3% pay raises due July 1. In the other interview, Sen. Rolfes (chair of Senate Ways & Means Committee) was asked if an income tax would be on the agenda for a special session.

The kind of traditional discussion about ‘let’s pass an income tax,’ people need to know it takes 2/3 of the legislature and a vote of the people. Conversations about a capital gains tax, very likely would be a legal battle about is that an income tax or is it a sales tax or what kind of tax is that? I as a budget writer, I don’t look at that kind of policy as something that will dig us out of a hole in the next year. It’s something that we might want to look at as part of a long-term reform policy.”

In response to the question if an income tax could be part of a long-term reform, Sen. Rolfes said:

Sure. Everything is on the table. But people need to be really aware that is a vote of the people. That’s a big project.”

Washington voters have already rejected 10 straight income tax proposals. Also, every state in the country and the federal Internal Revenue Service (IRS) unequivocally says a capital gains tax is an income tax. According to the IRS:

This is in response to your inquiry regarding the tax treatment of capital gains. You ask whether tax on capital gains is considered an excise tax or an income tax? It is an income tax. More specifically, capital gains are treated as income under the tax code and taxed as such.”

Legal problems aside, what about the budget implications of relying on a highly volatile capital gains income tax in a recession?

The real challenge the legislature has is that I don’t think there is a way you can tax your way out of this because every industry in the state has been really decimated . . . California is freaking out because they do have a capital gains tax and that’s their first line item that they are saying they think is going to get completely annihilated.”

Personal income tax revenues are revised downward by almost $33 billion due to a decline in all income sources, but particularly wages, proprietorship income, and capital gains . . . Forecasting revenues associated with capital gains is subject to significant uncertainty because realizations are heavily dependent upon stock market performance and when taxpayers choose to buy or sell stock.”

Collective bargaining negotiations will commence or continue with all of the state’s bargaining units to reduce pay by approximately 10 percent, relative to June 2020 pay levels.”

Sen. Mullet is correct that we can’t tax our way of this hole and that a capital gains income tax is not the solution.

Along with reducing planned spending increases (like pay raises) and utilizing the emergency reserves, there remains the possibility of additional federal funding flexibility.

WPC continues to call on federal leaders to provide flexibility for the original CARES Act funding. It sounds like this message is starting to be received. According to Route Fifty:

The Trump administration is open to granting states, counties and cities more flexibility in how they can use $139 billion in previously approved coronavirus relief funding, Treasury Secretary Steven Mnuchin said on Tuesday.

If there is bipartisan support for this and the money has already been allocated, that is something that I assume we’d very seriously go along with,’ Mnuchin said during testimony before the Senate Banking Committee, in response to a question about allowing states to use the money to fill budget shortfalls caused by the virus-driven economic slump and the massive dent it has put in state and local tax revenues.”

As for an income tax, we should learn from the budget problems of our neighbors. California knows all too well that an income tax does not make your budget recession proof.