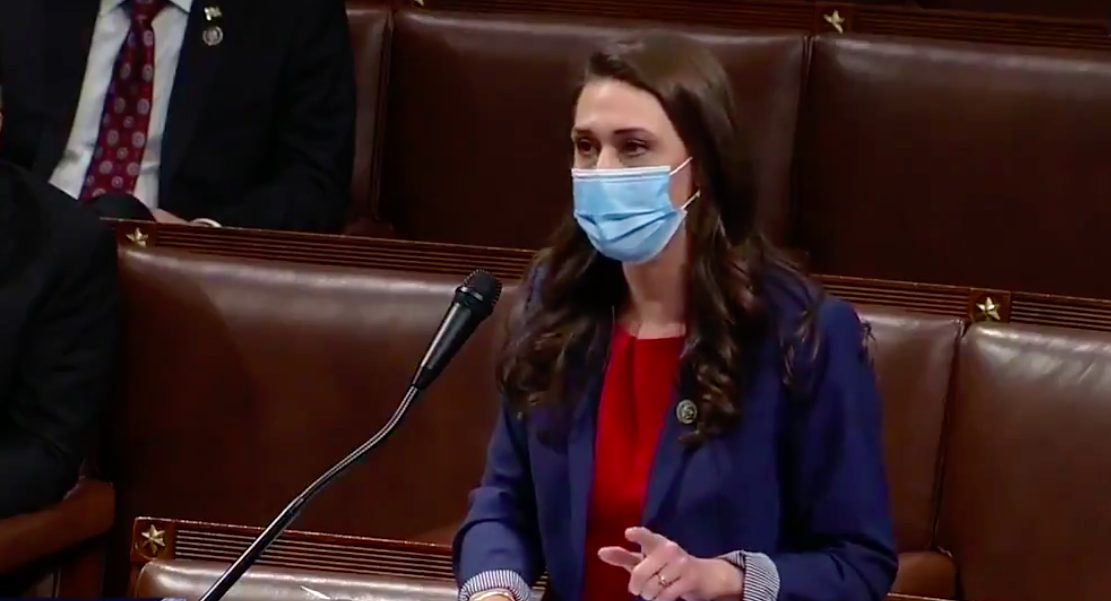 It’s said in the Armed Forces that soldiers who show conspicuous bravery in battle often aren’t the ones known as the toughest around the barracks. It’s not uncommonly the quiet, more reserved soldiers who stand out for bravery when horrible events on the battlefield require it.

Jaime Herrera Beutler is no camera chaser. She’s in her 6th term in the U.S. House of Representatives. Despite serving in the majority for much of that time her profile in both Washingtons is quite modest. It’s not for lack of talent or ability. She was elected to Congress in 2010 at the age of only 32, having already served in the Washington State House of Representatives and on the staff of the once rising and now fading star, Cathy McMorris Rodgers.

Herrera Beutler has chosen a quiet path of service. Maybe it was the experience of birthing and raising a child who shouldn’t be alive today that contributes to that choice. Herrera Beutler is the 9th woman to give birth while serving in Congress and it was the story behind that child that landed her on a CNN list of “Bad Ass Women of Washington.” Many people might choose a more muted approach to service in that parenting circumstance.

Yet, sometimes the moments when life asks the most of us are not of our choosing. I have no idea what Herrera Beutler expected the day of the Capitol Riot. We all know it was one of the most searing events in our country’s recent history. And it quickly became a time of choosing as the consequences of the Big Lie about a stolen election – aided, abetted, and tolerated by many a Republican in Congress – came into horrific clarity.

The violent seizure of the Capitol jarred some Republicans into sobriety, at least for a bit. Even then far too many voted to object to the certification of Electoral College votes from Arizona and Pennsylvania. Herrera Beutler is one of the minority of House Republicans who can say with honor they voted against such challenges. And she didn’t just vote, she took to the floor to say why:

It’s not that admirable vote, however, that deserve the real praise. Even as Congress certified the election, talk of impeachment was obvious. How many House Republicans would have the courage to vote for what they knew Trump deserved, despite the political cost of angering the Trump base, was an open question. The night before the House impeachment vote Herrera Beutler not only announced her vote for it, she, like Liz Cheney, did so with a statement that presented a clear, public case for why impeachment was the right choice:

To her credit, Herrera Beutler kept at it. After hearing right away from outraged Trump supporters in her district, she posted a long, detailed Twitter thread that made a vivid a case for conviction; as good or better than anything presented by the House impeachment managers.

In the days since her impeachment vote you can’t look at a social media post from Herrera Beutler, on topics wholly unrelated to impeachment, without seeing a barrage of commenters, especially on the political hellscape known as Facebook, furious about her record on the 2nd impeachment of Donald Trump.

At such a point, it would have been understandable for Herrera Beutler to keep her head down and tend to restive Republican base voters rather than ruffle any more feathers.

Instead, she plucked some of those feathers out.

Her statements on the record to CNN and then publicly released as the impeachment trial neared its end created a temporary tumult in DC:

If it wasn’t already clear before that statement, explicitly calling for other Republicans with knowledge to speak out, Herrera Beutler had made a choice: stand for what was right and not back down. That’s courage and character we have seen far too little of in Washington, DC in recent years.

Herrera Beutler has largely won re-election comfortably since joining in Congress, but her Southwest Washington district is not a safe one. Veterans of Washington GOP politics will attest the home base of Linda Smith and Don Benton had a Trumpy core long before Trump. A 2022 re-election campaign looks quite thorny now for Herrera Beutler.

She’ll have some help. One of her fellow Republicans of courage in the House, Adam Kinzinger, started a “Country First” PAC to support Republicans who believe politics is ultimately about governing, rather than, as Ben Sasse described: “about the weird worship of one dude.” Herrera Beutler is already Country First’s first endorsement. Meanwhile, the Republican Accountability Project (formerly Republican Voters Against Trump) has committed to campaigns supporting Congressional Republicans who voted for impeachment and conviction. They have an ad out supporting Herrera Beutler already.

On the flip side, the wing of the GOP more content to speak crazy to the masses rather than truth to power will inevitably be gunning for Herrera Beutler:

Politicians are not often profiles in courage. Now at least there are ten House Republicans and seven Senate Republicans who chose duty, honor, and integrity over political expediency. Even among those seventeen, with names like Mitt Romney and Liz Cheney, Herrera Beutler stands as tall any. She is a profile in courage in a time of political cowardice.

How Herrera Beutler will fare electorally in 2022 is unclear, yet we need people like her in Congress. More workhorses with courage and less talking heads pausing their scramble for the cameras only long enough to ascertain the current direction of the political winds.

Jaime Herrera Beutler is exactly the kind of person who should be in office at a time when America needs both parties to believe in and fight for our democratic system of government. She had the character, courage, and moral clarity to not only choose that fight, she repeatedly ran to its frontlines in a time of need while others cowered.

Eric Earling formerly worked for U.S. Senator Slade Gorton as well as for President George W. Bush, serving in the U.S. Department of Education. He is a Seattle-area native who was active in Washington politics and policy for over 20 years. He currently lives in Boise, ID.