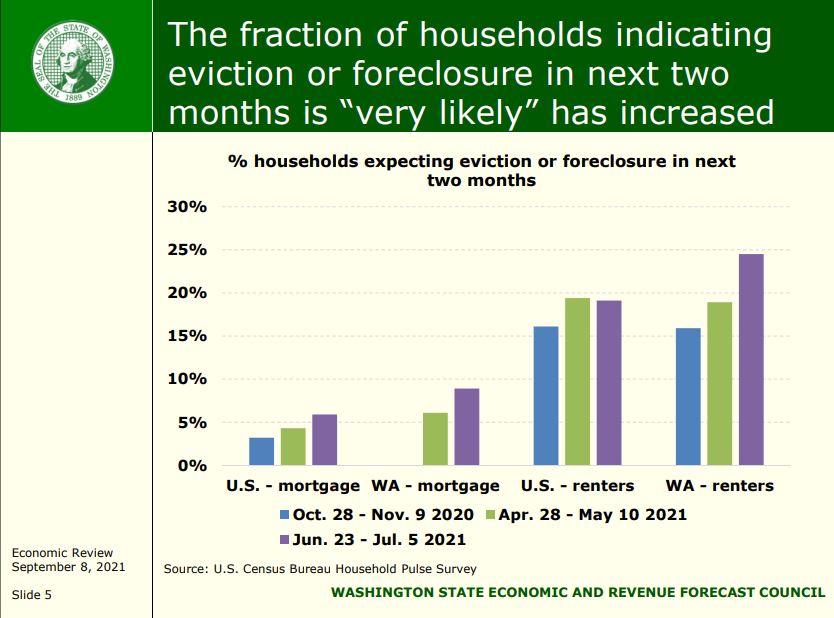 Nearly one-quarter of Washington State renters were expecting to be evicted within two months, as of early July.

Sen. Lynda Wilson said during the meeting that the state had only disbursed 11% of the rental assistance funding it had available. Steve Lerch, executive director of the Economic and Revenue Forecast Council, said it’s unclear why renters aren’t applying for assistance.

“It does suggest that they’re either unaware of that assistance, or they don’t believe they’re going to get it,” Lerch said.

Washington State isn’t alone in its struggle to get cash from state coffers into the hands of renters facing eviction. In June, the Washington Post reported that only 12% of the $25 billion in federal funds sent to states had been distributed.

At the same time, employment levels in Washington State have not returned to pre-pandemic levels, except for those earning more than $60,000 a year.

Lerch said this ties in with reductions in the food service and hospitality industries, which have been hard-hit by the pandemic.

“Some of those restaurants, bars, accommodations, that’s going to be a big part of that because those sectors were starting to come back. In the most recent national data, we saw a big decline in food service employment,” he said.

The recovery isn’t just uneven on an industry level, but county by county too, as pointed out by DJ Wilson here. In several coastal and eastern Washington counties, nearly one in five Washingtonians need either SNAP or FAP food assistance, according to the Department of Commerce.

And these two issues play into each other.

“I think when we see that employment is not back to pre-pandemic levels for lower income households, then those are going to be the folks that we would anticipate are most at risk of worries about eviction or foreclosure,” Lerch said.

At the same time, home prices both in Seattle and across the U.S. continue to skyrocket. Home prices in June grew 25% year-over-year in Seattle, well outpacing the roughly 18% seen nationwide.

Earlier data released in the monthly Economic and Revenue Forecast Council showed that transportation exports, vehicle sales and real estate excise tax was up between July 11 and Aug. 10.