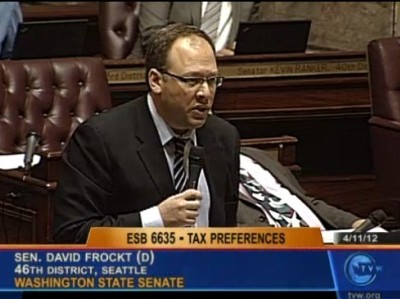 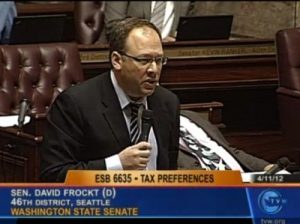 OLYMPIA, April 18. — A little birdie tells us that the vote on the big tax bill this session may not have been as clear-cut as it looked to us ordinary mortals last Wednesday morning. That was the two-thirds vote in the House and Senate for Senate Bill 6635, the measure that repealed a tax break for out-of-state banks at the same time that it extended and created a passel of other tax exemptions. The way plenty of folks see it, the vote seems to have plunged a wooden spike through the heart of a court challenge filed by Democrats against the supermajority requirements imposed by Initiative 1053. But the new argument we’ve heard makes it sound like the stake didn’t quite run all the way through, and there is the tiniest chance it might rise from the dead.

We’ve told the basics elsewhere on this site, but suffice it to say that this is a huge deal in the Washington state Legislature. Because the supermajority rule requires a two-thirds vote of the House and Senate for tax increases, Republicans have power beyond their numbers. Every time the majority Democrats want to pass a big tax hike, the minority Republicans can say no. So Republicans can sort of tell Democrats what to do and Democrats naturally hate that.

What has ensued is kind of a weird legal chess game in which Democratic lawmakers have tried every way they can to show the courts they just can’t live with supermajority rules. They’ve tried parliamentary motions, scripted colloquoys and test votes that everyone knows in advance will fail. Their argument is that the rule is unconstitutional, and they are convinced that if they could ever get the state Supreme Court to rule on their argument, they would win. But to get the court to take it to the constitutional level, they first have to prove they have exhausted all other remedies. They have been trying for the last 19 years and they still haven’t been able to do it.

The latest challenge was founded on the failure of a banking-tax bill last year. It got a majority but not a two-thirds vote in the House last year. The Legislature essentially passed it this year, with minor differences, as part of a broader bill. There was a two-thirds vote, 74-24 in the House and 35-10 in the Senate. That sort of shows the Legislature can live with the rule, doesn’t it?

So this year’s vote seems to clinch the argument for the Republicans. Except – we’re hearing that there might be a way the argument could be answered.

It goes like this. Senate Bill 6635 didn’t just repeal the bank tax break. It also dealt with a few other tax breaks. And in one case, it exempted craft distilleries from the new license-fee requirements of Initiative 1183.

We’ll spare you the whys and wherefores and the how-muches. The big thing is the bill amended an initiative. I-1183 passed last fall, and during the first two years after an initiative passes, it takes a two-thirds vote to amend it. So the 12 Democratic legislators and the special-interest groups that filed the latest lawsuit might argue that the Legislature was actually intending to amend an initiative. It only happened to take a two-thirds vote to raise a tax at the same time.

Here in the mahogany-paneled offices of Washington State Wire, as we play armchair lawyer, we have to admit this one has us scratching our heads. We might be wacky unschooled laymen, but it seems as though intentions don’t matter as much as what the Legislature actually did. Clearly the Legislature raised taxes by taking a two-thirds vote – end of argument.

But if legislative intent is an issue, a review of the TVW tapes from the final night of the session tells us an interesting story. During the speeches on the House and Senate floors, not a single legislator mentioned that they were amending an initiative. Instead, all the speeches were about tax breaks.

Among those who spoke were four of the 12 Democrats who signed the lawsuit. You can watch them struggle. It was as if they were all just beginning to realize that the two-thirds vote on the tax bill was going to do big damage to their lawsuit. So they pointed out that this year’s bill repealed the bank tax break in a slightly different manner than last year’s bill. Therefore that made this year’s vote completely different. It’s hard to say if anyone will buy that one – it’s normal for bills to be altered during the legislative process, and if a bill looks a little different by the time it gets through, it’s not exactly headline news.

Then you can see an exchange between Sen. David Frockt, D-Seattle, and Lt. Gov. Brad Owen, which appears to demonstrate that an amendment to an initiative had nothing to do with it. Frockt, one of the plaintiffs in the case, asked a series of questions — the sort of thing legislators do when they want to establish a record for the sake of a lawsuit. Frockt asked Owen how many votes were required on the bill. Owen said two-thirds.

Frockt followed up: “Mr. President, is the two-thirds vote required on this bill due exclusively to the closure of the tax exemption on certain banks?”

Owen answered: “Based on the president’s understanding of the bill, that would be correct.”

And Frockt let it go through. He didn’t object, nor did anyone in the Senate. So apparently no one in the Senate even had a clue that the bill was amending an initiative.

Chess is really the right metaphor here. Each side is trying to anticipate the other’s move, five turns in advance. Naturally it is an absolute delight to those of us who see lawmaking as sport and who aren’t above a little kibitizing. But we have to say this move, should anyone make it, seems a bit weak.