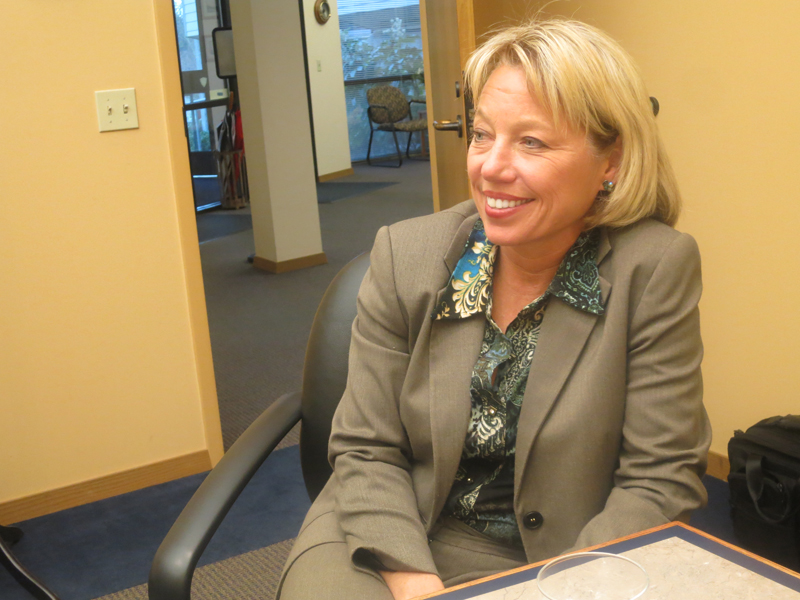 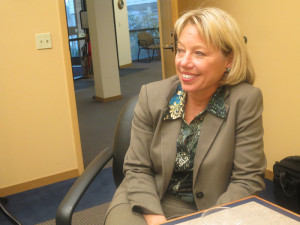 Unless California changes the rules it adopted in 2007,  within the next few years the state can expect severe market disruptions, long lines at the gas pumps, closures of oil refineries and perhaps not much  in the way of the greenhouse-gas reductions the policy was supposed to achieve. So says the Western States Petroleum Association, the organization that represents oil refiners in six west-coast states, armed with a study it commissioned by the Boston Consulting Group.

“We want to get the facts on the table about what impacts could occur in the state of Washington if it were to adopt the California program,” says Catherine Reheis-Boyd, president of the Sacramento-based trade association. “We hope it is information the governor can use, and [that he can] sort of step back and take a little more cautionary approach to these questions in Washington.”

Reheis-Boyd was in Olympia Tuesday to meet with Gov. Jay Inslee. Her association’s warning is a timely one. Low carbon fuel standards are among the greenhouse-gas reduction proposals now being studied by a state-government climate-change task force. But perhaps more importantly, Washington’s green-minded governor last month joined the chief executives of California, Oregon and British Columbia in pledging to enact low carbon fuel standards and other measures aimed at reducing carbon dioxide emissions.

Inslee has said little about new rules for gas, instead touting a possible cap-and-trade policy for Washington, but his decision to sign the multi-state pact has thrown the business community into an uproar. At the very moment that business is looking to firm up fragile support for a gas-tax increase for road construction, his administration is urging a policy that its own consultants estimate would increase the price of gasoline by 93 cents to $1.18 a gallon. Already the Washington Trucking Associations is threatening to withdraw support for the gas-tax increase, and the Association of Washington Business is sounding alarm. But if the Inslee Administration charges forward nevertheless, the refiners say the policy can’t possibly work – and a made-in-California disaster could repeat in the Evergreen State.

California, the first state to adopt stringent low carbon fuel standards, or LCFS in industry parlance, is shooting for a 10 percent reduction in carbon emissions from motor vehicle fuel by 2020. But here’s the problem. Six years ago, when then-Gov. Arnold Schwarzenegger imposed the rules by executive order, California regulators were assuming that breakthroughs were right around the corner. They weren’t.

The basic idea is that gasoline and diesel fuel can be mixed with cleaner-burning ethanol in order to reduce the carbon content of tailpipe emissions. In essence it is the same thing refiners have been doing for the last two decades – in many markets motor vehicle fuel already contains 10 percent ethanol.

But the type of ethanol that is commonly used – manufactured from corn – contains carbon as well and doesn’t offer that great a reduction. With a 10-percent mix, the total carbon reduction is a meager 1 percent. Most vehicles can’t run for long on a mixture of more than 10 percent ethanol – higher concentrations dissolve seals and gaskets. But California regulators were banking on the development of a new ethanol-brewing industry, using tree-bark and agricultural waste products. This so-called cellulosic ethanol has a much lower carbon content, and at least technically speaking, a 10 percent mix could get the fuel much closer to a 10 percent reduction in carbon content.

Trouble is, that industry never developed. Only one such cellulosic ethanol plant has opened in the United States, and it doesn’t come close to meeting the demand of the California market. Worse, California regulators were counting on a rapid national changeover to automobiles and trucks that could accept higher concentrations of ethanol – that hasn’t happened. Nor has there been a rush by corner gas stations to purchase new pumping equipment capable of handling high-ethanol-content fuel. And an elaborate system under which oil refiners were supposed to purchase “credits” if they couldn’t meet their targets hasn’t gotten off the ground. The idea was that they might subsidize the purchases of fleet vehicles that run on electricity, hydrogen and other alternative fuels. But those types of vehicles aren’t available in large numbers yet, and for the most part those technologies are in their infancy.

Right now the California rules are just taking effect – current standards require a 1 percent reduction in the carbon content of motor fuel. But by 2015 or 2016, when bigger reductions are required, the refiners say full compliance will be impossible, and at that point all hell will begin to break loose. Already the feds are backing off from plans to mandate higher ethanol concentrations in fuel. So why isn’t the California legislature slowing down the imposition of its even-more-stringent rules? That’s politics, Reheis-Boyd says: “Welcome to California.”

At Last, an Economic Study 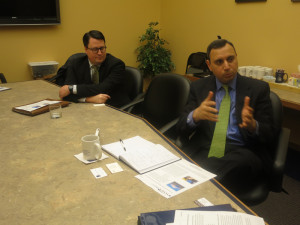 Kevin Adams and Rohan Nath of the Boston Consulting Group.

For an analysis of the economic consequences, the Western States Petroleum Association turned to the Boston Consulting Group, a global management consulting firm with more than 70 offices in 45 countries. Here one must point out that the association commissioned the study. But it also must be noted that there hasn’t been much other statistical analysis given to the issue. In her visit to Olympia, Reheis-Boyd was accompanied by authors Kevin Adams and Rohan Nath, partner and managing director of the consulting firm, self-described agnostics on the subject.

“Until we published our report and did our analysis, this really was not a fact-based debate,” Nath says. “There was a lot of emotion and there were a lot of beliefs, but there were no facts.” And while Nath acknowledges that their findings have been impugned by critics who use the standard hired-gun argument, he says it is hard to refute an argument when there are no other facts in evidence. “If you have a different set of facts, we are open to listening,” he says. “But if you don’t have another set of facts, you can’t ignore the facts that we bring to the table.”

What they did was to talk to the refiners themselves, pore over their data, draw conclusions based on normal business practices – something the trade association could not do itself because of antitrust concerns. They concluded that if the California policy remains in place, big trouble is coming.

Long Lines at the Pump

Right now refiners can’t get enough cellulosic ethanol to blend with their gasoline and diesel fuel, but they are able to comply with the rules by purchasing what few credits are available. But as the standards ratchet up in future years, they will run up against a brick wall. Suppose all the projected cellulosic ethanol production in the United States goes to California. And suppose some supply of low-carbon ethanol can be procured from other countries – Brazil is ramping up production of sugarcane-based ethanol, though of course the tanker vessels spew greenhouse gases into the atmosphere in the process of transport. Still the Boston Consulting Group estimates the industry will be short 45 million tons of credits by 2020. Of course that will drive up the price of fuel because credits will become more expensive. It will be a seller’s market for utilities and other owners of vehicle fleets, and yet there won’t be enough.

That means refiners will have to figure out what to do with the fuel they can’t sell in California. From there it is a matter of rational business practice. “What they will do is say if I cannot sell the compliant fuel in California, either I can cut back my production, I can shut down or I can find another market for my fuels,” he says. Fuel that once was sold on the California market will go to Oregon and Washington – presuming that neither state enacts low carbon fuel standard themselves – or to Hawaii, perhaps even Mexico. But there are limits – the further the fuel is shipped, the more expensive it will be. If it is sold in Mexico, the shipping costs will add $7 a barrel, and so on. So California refiners won’t be able to offload all their production to other states and countries at a profit. By 2020 between 40 and 50 percent of the state’s refining capacity would be unable to find a market. Many refineries would simply close. And that’s a big problem for communities that depend on refineries and the six-figure salaries they pay as engines of the local economy.

Meanwhile, the supply of fuel on the California market would become a trickle. “The security of the fuel supply would be compromised, because now you have less fuel in California,” Nath says. “You’ll have long lines at the pump.”

And of course the state would lose out, too: The less fuel that is sold in California, the less money it would receive in tax revenue.

If it’s such a disaster for the California economy, one might wonder why the state is plugging ahead. But Nath says you have to remember that entrenched interests are involved. Certainly it is a description some would apply to the oil industry, but it also applies to environmental groups, venture capitalists whose investments in alternative energy depend on high oil prices, and regulators who are suspicious whenever industry balks at a costly new rule. Here’s the key point: California isn’t the only state where decision-making bogs down in political stalemate, and it could happen here, too. Should Washington follow California’s lead, this state’s five refineries would likely face the same problem, Nath says, and the supply of low-carbon ethanol would only become tighter. “If you’re sitting in a high-rise in Seattle, it is probably easier to make the argument that those smelly refineries ought to go away,” Nath says. “The guy who works in an oil refinery, or who works in a job that supports the refinery – it probably would not be a good outcome for him.”

Reheis-Boyd notes that a lawsuit in California has at least temporarily halted the imposition of higher standards, perhaps buying the state a year – “a gift to the state for the moment.” But already some large oil companies have been selling their California assets at fire-sale prices.

If Washington wishes to enact some sort of policy to reduce greenhouse-gas emissions, she argues that it would make more sense to enact a market-based system such as cap-and-trade or a carbon tax. In practice, though, she says such programs seldom live up to the ideal of an efficient marketplace – “people keep changing the design of the program.” Even those could cause trouble if Washington goes it alone, and neighboring states leave things be.

The big problems emerging with low carbon fuel standards in California ought to make Washington gulp, she says. “What they could do is think about a better way to do it than this policy, which is causing some pretty big concerns. They didn’t know it when they adopted it in 2007, none of us did. We didn’t even know what LCFS stood for. We thought what the heck is that?”