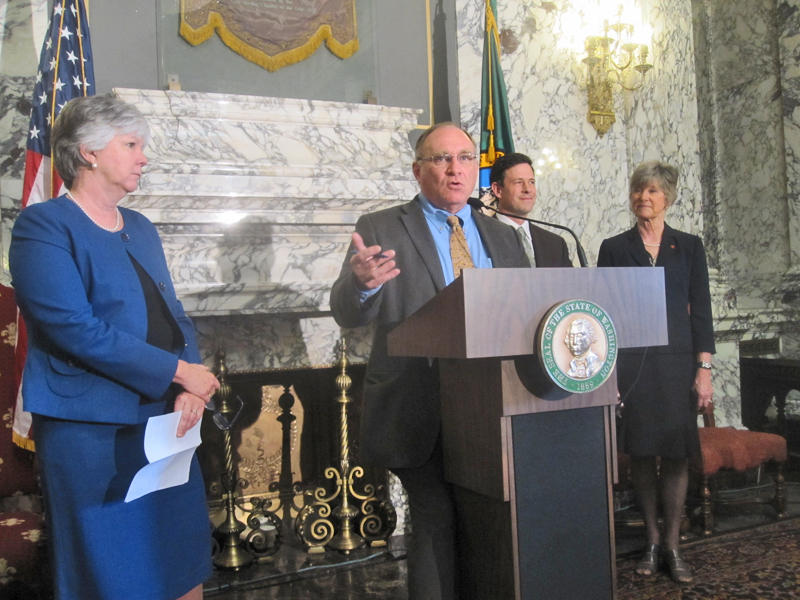 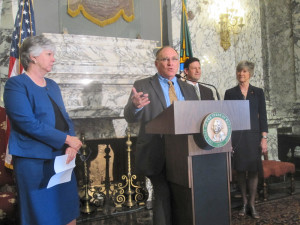 OLYMPIA, April 3.—Things normally are easy when you have divided control of the Legislature. The Democrats write a budget and the Republicans bash it. Then the Republicans write one and the Democrats rip it apart. But what do you do when both teams link arms and write one? Suddenly things get a whole lot more delicate.

That’s what happened in the Washington state Senate Wednesday when at least some Democrats joined with Republicans to announce a $33.3 billion spending proposal. It reflected the priorities of the fiscally conservative Majority Coalition Caucus, to be sure – first and foremost, no new taxes. In a few days, the majority Democrats in the House will propose a budget that presumably will include tax increases and substantially higher spending. But it was the scene in the Senate as the budget was rolled out Wednesday that was remarkable. Two Democrats took the stage alongside two Republicans. A joint budget announcement? “I think it is historic,” said Senate Republican Leader Mark Schoesler, R-Ritzville. “That is unprecedented. It is history today.”

While one might quibble that it actually has happened before, two years ago, when then-majority Senate Democrats brought Republicans into the room to negotiate a budget they couldn’t pass alone, the announcement provided another indication of how business as usual has been upended in the upper chamber this year by the takeover of a bipartisan coalition. That coalition is heavily weighted toward the Republican side – 23 Republicans and two Democrats. Yet the majority caucus has practically begged the other team to play a role. Where the biggest single task of the session is concerned – the writing of a budget – that is exactly what happened. And that means plenty of complications.

Democrats in the House and in the governor’s office did their best to diss the sharp-penciled proposal as the product of heartless Republicans. One Senate Democrat issued a press release denouncing it, a sign of opposition to come on the Senate floor. And in Majority-Caucus ranks, the buzz was that Gov. Jay Inslee’s staff was actively urging Senate Democrats to vote no. But with some of their own on board, and with a bipartisan vote likely on the Senate floor, the argument that the budget represents an extreme position becomes harder to make. 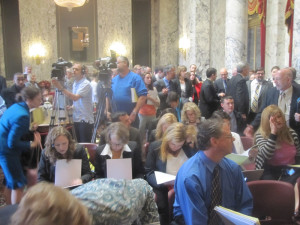 State Sen. Jim Hargrove, D-Hoquiam, joked Wednesday that there might be only two votes for the Senate version of the budget – his own and that of state Sen. Andy Hill, R-Redmond, chairman of the Senate Ways and Means Committee. That’s what happens when you get too close to the center and too far away from the partisan extremes. But Hargrove said what was more important to him and to state Sen. Sharon Nelson, D-Maury Island, was that they advanced the budget process.

“We have been working together in probably the most open and inclusive way that I think has ever built a budget,” said Hargrove, currently the longest-serving member of the Legislature at 28 years. “I mean, there is no doubt about that.”

What the Dems got, they say, were stipulations that preserved funding for the Temporary Assistance for Needy Families Program, programs for illegal immigrants, and family planning – among other things. They insisted on Washington-state participation in the expansion of Medicaid programs under the federal Affordable Care Act, and they demanded that the state spend at least $1 billion to implement the Supreme Court’s McCleary decision, which mandates higher spending on K-12 education. It might also be noted that the budget recognizes labor contracts negotiated between public-employee unions and Democratic Gov. Christine Gregoire, and provides full funding for an arbitrator’s award to home care workers represented by the Service Employees International Union – both of which would have been doubtful in a Republican-only document.

Naturally, when Hargrove said he wanted something in the budget, the staff would always glance at Hill for his approval. But Hargrove said you have to expect that. The other team has the majority and somebody has to be in charge. What counts is the final product.

“The process has been bipartisan up to now,” Hargrove said. “Whether it is a bipartisan budget, you are going to have to wait and see how the floor votes.”

Nelson said she still thinks the Legislature is going to have to pass a tax increase, and there are plenty of other things she’d like to change. But she said at least part of the budget “reflects our Democratic values.”

Some Would Rather Fight

The high level of participation of Democrats in the Senate budget process came as a surprise to many Wednesday. While it wasn’t a secret, it also wasn’t widely noted – and it seemed to run counter to the stand the Senate Democrats took at the beginning of session when the majority flipped. The Senate Democratic Caucus as a whole balked at an offer from the Majority Coalition Caucus that it share committee chairmanships. The Democrats would have shared power, but they also would share responsibility – and there were many on the Democratic side who argued they should sit this one out, for reasons of political advantage. Senate Democratic Leader Ed Murray, D-Seattle, finally rejected the deal, saying the committee assignments weren’t good enough. But more importantly he said the differences between the two parties were too great, and Democrats felt more comfortable in the minority, playing the role of critics. Three Democrats rejected top-down management and accepted gavels nevertheless.

To be sure, there were plenty of Democrats who didn’t seem to think much of the bipartisan approach on the budget. First at bat was Gov. Inslee, who advanced a bigger-spending plan last week, replete with $1.2 billion in new taxes. He issued a statement calling the budget proposal “deeply flawed,” arguing that it would cut childcare subsidies for low-income mothers and would reduce funding for state parks, the prison system and long-term care for the elderly. And in an apparent bid for support from Senate Democrats, he said “I’m heartened that some senators recognize the need for a workable, long-term financing plan for education that doesn’t cut services to our most vulnerable citizens or rely on gimmicks and half-measures.”

From Ross Hunter, the House Appropriations chairman who shortly will release his own budget proposal, came complaints that the Senate managed to avoid tax increases by relying “on assumptions that are unconstitutional or unsustainable. The Supreme Court has been pretty cranky about this issue, and this budget will do nothing to improve their mood. In addition to being unsustainable, some of their decisions seem downright cruel.”

And in the Senate, Nick Harper of Everett carried the standard for the progressive wing of the Democratic Party and provided a decidedly different spin. “Make no mistake about it, although Democrats were in the room, the budget released today is a Republican proposal,” he said in his statement. “Fortunately, Sens. Hargrove and Nelson were able to provide a firewall against the most egregious cuts and protect things such as implementation of the Affordable Care Act, family planning and get us started down the path toward funding basic education.

“And although we started down the road toward answering the McCleary decision, Gov. Inslee’s proposal takes a much larger step forward in addressing our paramount duty, and you can bet the House proposal will also go much further than our own. Without new revenue or at least some reform of our archaic system of taxation, we will find ourselves in the exact same situation we are in now when it comes time to write the next budget.”

All of which means that it is going to be a mighty interesting vote when the budget comes to the Senate floor – especially if Inslee attempts to organize resistance. Hargrove and Hill said they expect members of their caucuses to vote for it. At this point, though, it is not clear whether the bill will have united support from the Republicans in the majority caucus and whether Democratic votes will be needed.

The key thing for members of the Majority Caucus was to avoid tax increases and to insist on reforms to state programs, Hill said – and to write a budget that stood a chance of passing. He said they got that: There isn’t a tax increase anywhere in it. The budget doesn’t contain any of the attacks on “loopholes” that were contained in Inslee’s spending plan, nor does it reinstate temporary taxes on beer or service businesses that Inslee would continue in perpetuity. Indeed, the budget fails to embrace even two tax proposals that appear to have broad support – a fix to the estate tax, partially invalidated by the Supreme Court on technical grounds, and a complicated deal on telecommunications taxes. Though those may return as bargaining chips when dickering begins between the House and Senate.

“It was pretty clear from our caucus, from our voters, from what we heard the governor say in his campaign, that taxes were not something we should consider,” Hill said. “It has been very clear over the past few years. And I think that what Sen. Hargrove and I said at the beginning of session – we kind of said jeez, whether you want it or not, I don’t know if we’ve got the votes in the Senate to do tax increases. And so we proceeded on the assumption that we couldn’t, and we moved forward.”