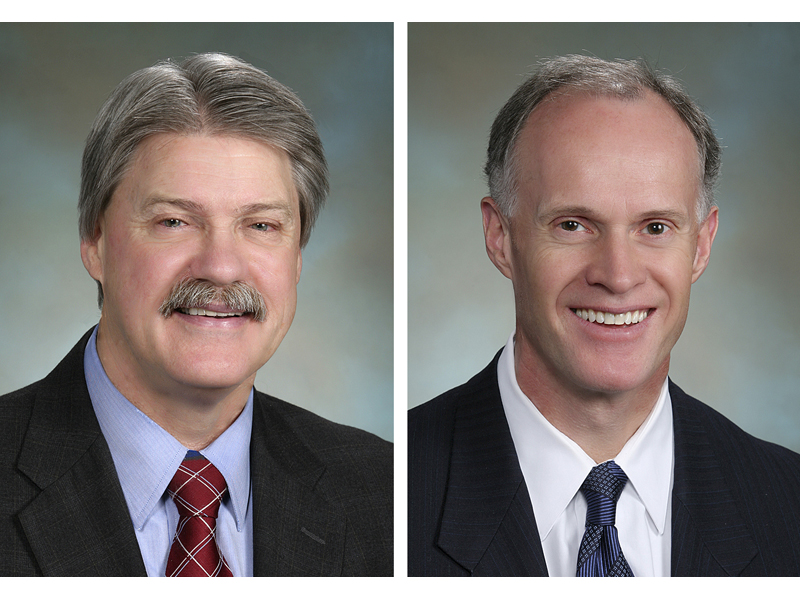 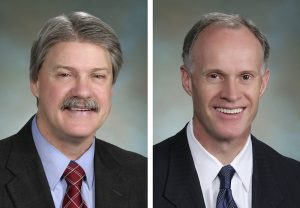 The letter declares, “Rodney Tom and Tim Sheldon are no longer Democrats.”

It might be the first time a political party has used a party-building email to give a couple of its own members a swift kick in the rump. Emails like that one arrive in Democrats’ email baskets every day, often three and four times a day during campaign season. They build mailing lists that can be used to flood the Legislature with phone calls, raise money and target specific groups of voters with political messages. The idea that one that one of these party team-building messages now is being used to excommunicate Tom and Sheldon shows the two may have crossed a political Rubicon.

The two Democrats, middle-of-the-roaders with a deep independent streak, were among three who voted with Republicans last March 2 on the budget, turning control of the Senate upside down. This year they took it up a notch — they said they wanted to spare the endgame upheaval, and they joined with Republicans to form a coalition. With two Democrats and 23 Senate Republicans, the 25-member Majority Coalition Caucus has the votes to rule the Senate. The reorganization has left the Senate Democratic Caucus a minority, with just 24 votes in the upper chamber.

Tom and Sheldon say they did it to ensure that the Legislature would consider fiscally responsible spending and reforms to state programs – something they say would be far less likely under the old Senate order. But the decision doesn’t impress those who place great importance on party ties. If Tom and Sheldon hadn’t done it, the Democratic Party would have had a clean sweep of all the bases of power in the Legislature – the governor’s mansion, the House and Senate. The Senate Democratic Caucus as a whole rejected an offer of six chairmanships and three co-chairmanships, though three members individually decided to accept gavels. And while the talk on the Senate floor has been genteel, as one might expect in the state’s highest deliberative body, the state party is under no such constraint. 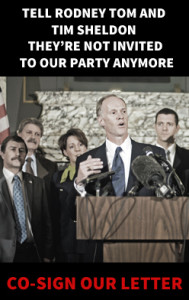 From the party-building email.

On Feb. 2, at its organizational meeting, the state Democratic Party passed a resolution of “censure” against the two members. That means no help at campaign time, it says – no more campaign contributions from the state party and no more access to Democratic mailing lists. And no doubt, a swift call to security if either show up at Democratic headquarters.

The letter urges the faithful to sign an electronic letter of protest, thus putting their names on lists that might be utilized in later battles and campaigns. The letter from Pelz urges Democrats to “call out Tom and Sheldon for the traitors they are. Join us and co-sign our letter telling Rodney Tom and Tim Sheldon that they are no longer part of the Democratic party.”

Pelz minces no words. He notes that the state party gave Tom $25,000 in campaign funds, but under the new order of things, Tom has become Senate majority leader. “Rodney Tom has been paid off for his treachery,” he says. “He was given the position of Senate Majority Leader, the most powerful position in the Senate. This just shows how he’ll place his own political ambitions over the people he’s supposed to represent.”

Pelz declares that the two “have no right to call themselves Democrats. Rodney Tom and Tim Sheldon are no longer Democrats. Join us in sending that message today.”

Tom, D-Medina, and Sheldon, D-Potlatch, say they consider themselves Democrats – and in this state, that’s all it takes. Under Washington law, a political-party organization has no right to exclude anyone. When candidates sign up to run for office, they choose their own party affiliation – listed on the ballot as “prefers Democratic Party” or any other designation they choose. It is a reflection of the loose party control over the political process in Washington state. Voters do not register by party, and the primary-election system does not require voters to choose a ballot from one party or the other. Instead voters choose from a list of all candidates, and the top two vote-getters advance to the general election ballot.

Tom has said on numerous occasions that he believes himself to be a Democrat because of the party’s stands on social issues. Tom represents a “swing district” in the Seattle suburbs and was a Republican during his first two terms in the state House. He says he felt increasingly uncomfortable with fellow members’ stands on such issues as gay rights and abortion. He ran as a Democrat for Senate in 2006. But Tom says he became just as frustrated with the Democrats’ resistance to reform of state government programs affecting constituencies in labor, education and progressive activist groups. In remarks to the Association of Washington Business Wednesday, Tom joked that “the Senate is one of those boring tradition-laden institutions, and this year we decided to change it up a little.” He noted that on the workers’ comp issue, the first big debate of the session, the coalition struck a compromise position that picked up five votes from the Senate Democratic caucus — showing that centrism is “broader than just myself and Tim Sheldon, on one of the bills.”

He told Washington State Wire Friday morning, “The voters sent us down here to represent all the people. If anything this has increased my popularity in my district, and I don’t think that’s what Dwight had in mind. The average person on the street thinks both parties are crazy, and that people on both sides are out of touch with their values. People are looking for people who represent them, not the party apparatus.”

Meanwhile, the letter left Sheldon amused. “So I’m not invited to the party anymore, huh?” he laughs.

Sheldon, who represents a rural district on the Olympic Peninsula, reflects the more populist tradition of the area. It might be noted that his predecessor in the Senate, Brad Owen, now lieutenant governor, was one of three Democrats who voted with Republicans on a budget in 1987 – and for that offense he was targeted by the state Labor Council in 1988 in a big-spending and ultimately unsuccessful campaign to unseat him. Sheldon, who frequently votes with Republicans on spending bills, is one of the longest-serving members of the Legislature, yet has found himself on the outs with his own party so often that he faced formal punishment during the last two years. Under former Senate Majority Leader Lisa Brown, D-Spokane, he was stripped of all but one committee assignment. It is typical for members of the Senate to serve on three or four committees.

Sheldon says that in nine races he has never gotten support from the state party. “They’ve never given me any financial support, they do not help my candidacy in any way, so it is kind of funny that they want to withdraw support – I mean, what support? I make a living running against Dwight Pelz and his Seattle liberals.”

He recalled a statement from a former Democratic Party chairman. “Paul Berendt once said, every time we say something about Tim Sheldon, he gets another 50 votes.”

Sheldon said the state party probably has to do something to counter the idea that a centrist approach might be better than Democratic control of all corners of the Legislature. And so his feelings aren’t hurt in the slightest. Except for one thing. At one point in the letter, Pelz spells his name “Shelton.”

“He doesn’t even spell my name right anymore,” he sighs.