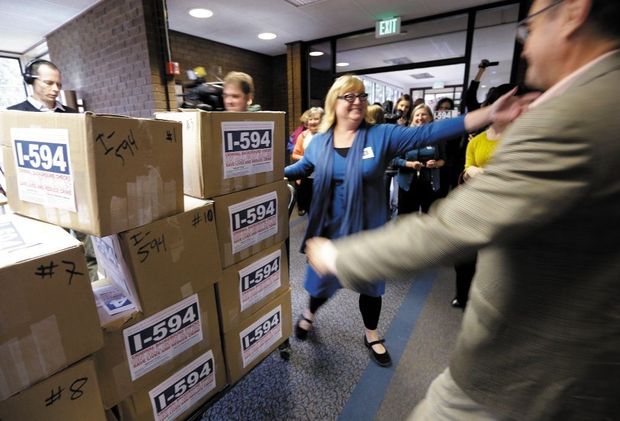 For the third year in a row, the Legislature convenes with no ballot initiative placed before it by signature drive.

The last successful signature drive for an initiative to the Legislature was in 2018 for Initiative 1000, which would have legalized affirmative action. Somewhat unusually, the Legislature approved that measure in 2019, but voters overturned it with Referendum 88 the following November.

The COVID-19 pandemic has had the effect of suppressing Washington’s typically robust direct democracy culture, driving up the cost of paid signature gathering and limiting the large events that petitioners often target. So nobody brought a truckload of signed petitions to the Secretary of State’s office before the deadline last month. (The picture on this post is the petition delivery for Initiative 594 back in 2013.)

Meanwhile, no campaign to put an initiative directly before the people has qualified since 2018, when the ballot featured three measures.

That means lawmakers also arrive for the second straight year without any fresh — and frequently unwelcome — marching orders from the voters via the initiative process.

Several campaigns, most notably the ACLU-driven push to decriminalize most drug use, were shelved because of the risks of petitioning during the pandemic.

This year’s record crop of proposed initiatives to the Legislature featured two notable failures: Tim Eyman’s bid to outlaw all taxes on income, including the newly adopted capital gains tax, failed to draw deep-pocketed backers willing to overlook Eyman’s legal and reputational problems. And the double-barreled bid to repeal the state’s new long-term care tax with Initiative 1436 was at least partially torpedoed by Gov. Jay Inslee’s move to suspend collection of the tax while the Legislature debates changes to the politically problematic program.

Cary Condotta of Restore Washington, the grassroots conservative group collecting signatures for I-1436, said signatures dropped off dramatically after Inslee’s Dec. 17 announcement. However, it’s not clear the campaign would have made it to the finish line. Condotta said the campaign had nearly 200,000 signatures by mid-December; qualifying would require about 325,000, with enough cushion to offset any invalid signatures.

Yes on 1436, a companion direct-mail and online advertising push bankrolled by some of the state’s wealthiest conservative donors, spent about $385,000 trying to qualify the initiative.

However, as Condotta noted, 200,000 signatures is a solid start should the Legislature fail to mollify the program’s many critics. Also, Yes on 1436 has about $230K remaining, and most of its wealthy donors have histories of spending freely.

Similarly, Eyman’s failure shouldn’t be overly reassuring to supporters of the capital gains tax and progressive taxation in general. The kind of rich folks interested in bankrolling a repeal of that tax are likely to prefer more professional — although massively more expensive — mercenary initiative operatives over Eyman. And many conservatives would welcome an Eyman-free anti-tax initiative on the ballot to help Republican candidates in November.

1 Most commonly, lawmakers ignore initiatives to the Legislature, allowing them to go directly to the ballot in the fall. The state constitution also allows lawmakers to either pass the initiative as proposed or to pass an alternative so that both measures appear on the ballot the following November.

2 Deep-pocketed initiative campaigns tend to favor going directly to the people because that limits the Legislature’s ability to meddle. Initiatives to the Legislature — COVID aside — can be easier to qualify because the December deadline allows for signature-gathering all summer and through football season.

3 Filing an initiative is easy and cheap. Just takes $5 and an idea. More than 100 were filed this year, although many were duplicative.