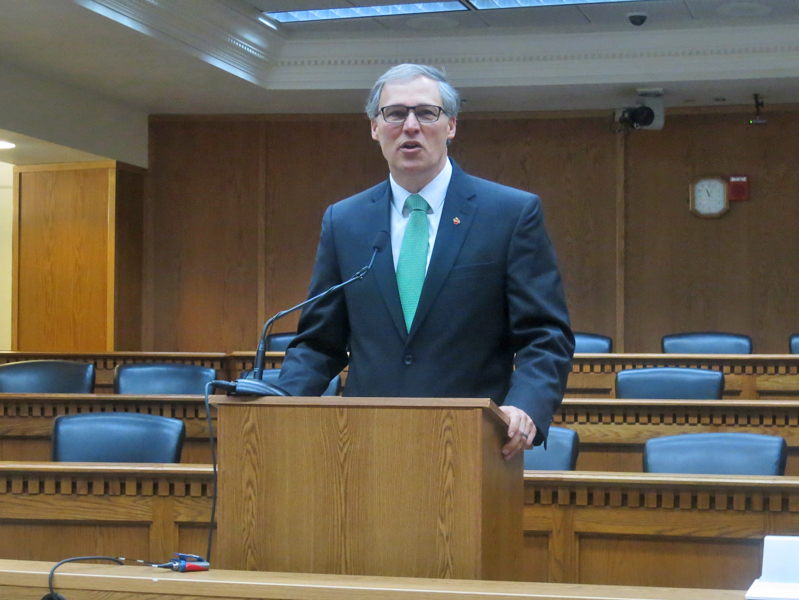 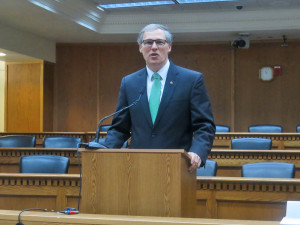 OLYMPIA, Jan. 10.—Gov. Jay Inslee refuses to rule out an executive order imposing low-carbon fuel standards on the state of Washington, and lawmakers say the possibility could well derail this year’s effort to pass a gas-tax increase.

At the annual pre-session Associated Press legislative forum Thursday, the governor was asked the question directly – will he promise he won’t do it? And Inslee wouldn’t say.

“It is something we are not taking off the table, and it is something that really bears looking into, like many things in the climate-change world,” the governor said. “But we have not made a decision on it.”

The chance that Washington’s green-minded governor might order the Department of Ecology to begin drafting regulations to change the composition of gasoline and diesel fuel has thrown the Legislature into doubt in recent weeks. At a time when lawmakers are contemplating a proposal to raise the state fuel tax by 11.5 cents a gallon – a hard sell for many members, knowing it will stir anger among voters – Inslee has raised the possibility that he might seek a policy that could raise the price of gasoline by a dollar or more. It isn’t just that Inslee has made environmental legislation a central push of his administration, or that low-carbon fuel standards are among the raft of policies considered by his climate-change task force last year. It also is that he signed a pact with California, Oregon and British Columbia in which he promised that the state would impose the rule.

Consultants to Inslee’s Climate Legislative and Executive Workgroup estimated last year that low-carbon fuel standards would add anywhere from 93 cents to $1.17 to the price of fuel. Though legislative opposition makes it unlikely that any such proposal would pass the Senate, and many question the governor’s legal ability to impose such a dramatic policy change without legislative approval, the Department of Ecology maintains that it already has the authority to impose regulations under existing law. All it would take is a word from Inslee. 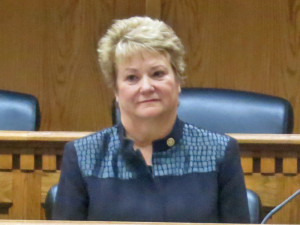 At Thursday’s AP forum, Republicans said Inslee needs to promise he won’t do it if there is to be any chance that a transportation package will pass this year. Democrats didn’t go that far, but they said the issue stands a good chance of bollixing up the debate. House Transportation Chairwoman Judy Clibborn said that of all the issues that might send the gas-tax plan into the ditch, the possibility of a low-carbon fuel standard executive order is the biggest hazard of all. “You have this coming out of the blue,” she said. “I think it is very difficult for us to go forward if that is not clarified, whether that is going to be done by executive order.”

It seems Gov. Inslee’s desire to do something about climate change is butting up against the political realities involved in legislative compromise. The Democratic governor is one of the biggest cheerleaders for the gas-tax proposal, but he has also has invested much of his political capital in his climate-change initiative.

Though Washington produces only a smidgeon of the world’s greenhouse-gas emissions – three-tenths of one percent – Inslee has been arguing that the state ought to lead by example. From the day he moved into the mansion last year the Democratic governor has been making impassioned speeches about ocean acidification and growing concentrations of carbon dioxide in the atmosphere. He convinced lawmakers to create the climate-change task force to consider policies that might be adopted by the Legislature. And even though that panel failed to reach agreement, he said he will offer proposals for climate-change policies during his state of the state address on Tuesday.

Inslee said Thursday that low-carbon fuel standards offer a promising way to reduce greenhouse-gas emissions, and he is not willing to rule them out. “It is one of the things that I think deserves study, and we will be looking at all the ramifications of that in a very sophisticated way.”

Low-carbon fuel standards, already on the books in California, would require refiners to mix motor fuel with an advanced low-carbon form of ethanol in order to reduce carbon-dioxide emissions. The California program also allows refiners who cannot meet the targets to pay public agencies to buy electric cars. The hitch, as California has discovered, is that the technology isn’t there yet – standard corn-brewed ethanol has too much carbon, and the advanced cellulosic-ethanol industry it anticipated in 2007 has not yet emerged. So refiners can’t meet the targets, and the electric-car option is a no-go. Electric cars are not yet a force on the market, the “credit” market is thin, and there aren’t many purchases the oil business can subsidize. Though the mandate hasn’t driven up gas prices in California yet, the crunch time comes in 2015, when stringent new standards kick in. The oil industry warns of fuel shortages, refinery closures and widespread economic disruption.

An industry-sponsored study in California mirrors the conclusions of the state’s own consultants – that the fuel standards could have a dramatic impact on fuel prices. The Boston Consulting Group concluded last year that the price of gas in the Golden State would rise anywhere from 33 cents to $1.06 a gallon when the fuel standards are fully implemented. 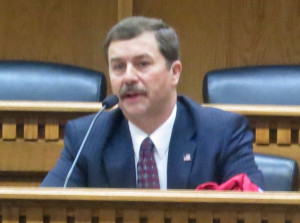 As long as the prospect of dramatic increases in fuel prices looms over the Legislature, lawmakers say proposals for a gas-tax increase will sputter. Washington is in the midst of one of its periodic efforts to raise the gas tax for road construction and other transportation needs – a complicated process that requires coalition-building and compromise. The deal is still being negotiated and the outcome remains far from certain. Lawmakers said Thursday they are suspicious Inslee might issue an executive order sometime after they pass a gas-tax increase. And if Inslee won’t rule it out, that goes double.

If you need proof that it is a reasonable doubt, said Senate Republican Leader Mark Schoesler, R-Ritzville, just look at the climate-change agreement Inslee signed last October. In an effort to revive a western-states climate initiative that went awry during the late recession, Inslee signed an agreement with the governors of Oregon and California and representatives of the government of British Columbia. In it Inslee promised to enact both low-carbon fuel standards and a cap-and-trade policy, under which industry would be required to reduce carbon-dioxide emissions.

“The fact that the agreement was signed with two other governors without any input from the rest of us is a complicating factor,” Schoesler said. “An executive order after we leave town would complicate a lot of policy very dramatically.”

Though House Republicans and the Majority Coalition Caucus in the Senate, of which Schoesler is a member, have not committed to a gas-tax deal, they said Inslee needs to promise he won’t issue an executive order if the gas-tax proposal stands any chance at all. And the Legislature isn’t the only problem. Even if the proposal is approved during the coming session, voters ultimately will have a say, either in the form of a legislative referral or a repeal initiative, argued Sen. Curtis King, R-Yakima, co-chairman of the Senate Transportation Committee. The public will be just as suspicious as the Legislature. “This is a big deal,” he said. “I mean, look at the polls on raising the gas tax 11-and-a-half cents – please do that.

“When you start talking about the addition of a dollar in additional tax, besides the 11-and-a-half, when you’ve got the governor going down to California and signing an agreement with British Columbia and Oregon and California, and part of that agreement references carbon fuel [standards], and the governor is saying we’ve got to do this, this is one of my priorities – I think he needs to come out and make a statement that this is not going to happen, that we are not going to implement carbon fuel [standards], because the public will not support this.” 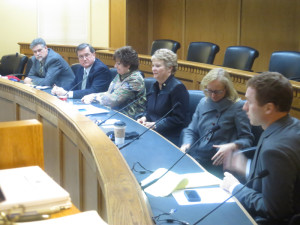 State Rep. Ed Orcutt, R-Kalama, ranking Republican on the House Transportation Committee, said the dramatic increase in fuel prices would have enormous impact on the Washington economy, “not only [on] how businesses in this state can remain competitive but how our families can even be able to keep food on the table. I mean, they just can’t afford these continued tax increases and cost increases that are caused by government decisions. And I think it is going to be imperative, if the governor wants this thing to pass, if he wants the revenue from the increased gas tax to fix roads – I think he is going to have to make a statement to the citizens of the state that he is not going to do something that is going to raise another dollar a gallon on those folks, or he will lose support for the whole package, and the whole thing will fall apart at the ballot box.”

Democrats stopped short of calling for their party’s governor to make a promise. But they said they are concerned as well. Clibborn said the Washington Trucking Associations was on board with the transportation proposal until Inslee signed the climate-change agreement. “We immediately had an erosion because they said we can’t have an increase in our fees and have this come in ahead of us as well. I think we are just beginning to scratch the surface of the concerns that are out there. I would think that that hanging over our head probably has more of an opportunity to hurt us going forward with a transportation package than any of the [Department of Transportation] mistakes that we have been talking about.”

Sen. Tracey Eide, D-Federal Way, the Democratic co-chair of the Senate Transportation Committee, said the governor hasn’t tipped his hand about the low-carbon fuel standards. “I don’t know if anybody up here has been notified by the governor about the carbon fuel tax,” she said. “And yes, that will hurt the revenue package.”

Inslee, who spoke last at the forum, said he was surprised to learn that lawmakers are bothered by the possibility that he might impose low-carbon fuel standards. He said they did not raise the issue during negotiations on the transportation package last fall, and he suggested that some might be looking for excuses to vote no on the gas tax. “Not one time, not one time in the last 12 months has a single legislator suggested in any way, shape or form that the ability to move forward to allow people to get to work is dependent on our ability to not solve the climate change problem. So I’m taken aback at those gentlemen and gentleladies who said that today, because they’ve never said that to me in hours and hours of negotiation.”