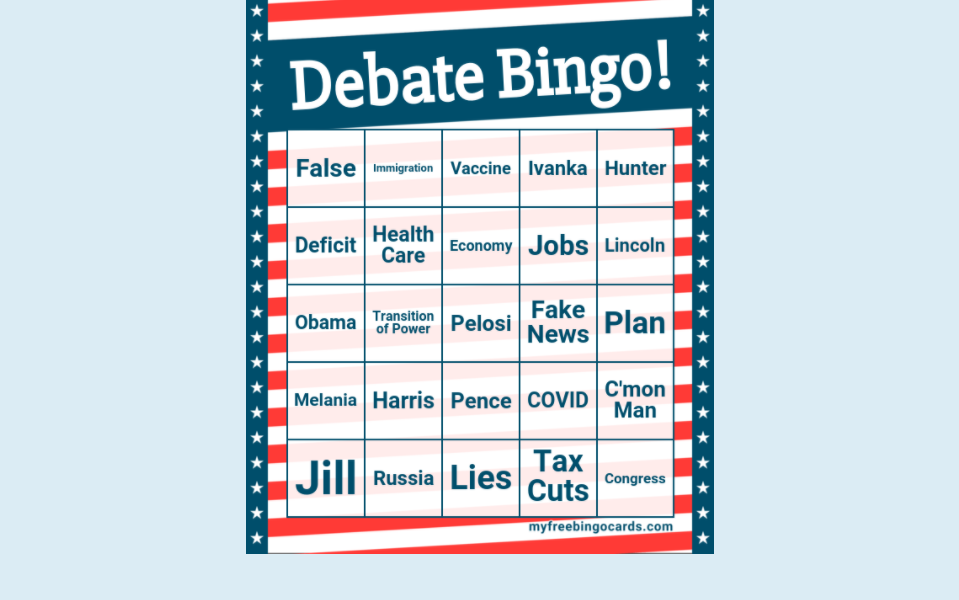 We took the liberty of building you a Bingo card ahead of tonight’s presidential debate. I wouldn’t add alcohol to this game, though. I expect a black out on this card (if you know your bingo rules) which may lead to a real blackout if you’re drinking. So, while I know we all want to forget this year, watch sober.

And, if you do get a blackout on the board, maybe take it as a sign that if all you do is sit on the couch this season, things can get dark. So, be sure to vote, to engage with your local candidates, and maybe get some exercise while you do it (doorbelling, sign waving?). It’s better than beer anyways.

The Economic & Revenue Forecast Council (ERFC) projected last week that Near General Fund (NGF) revenue collections for the 2019–21 state budget have increased by more than $2.2 billion and more than $2.4 billion for the next biennium (2021–23). The increase is a striking shift from June, when ERFC lowered the state’s revenue projection by more than $9 billion over the next three years. Today’s forecast cuts that June revenue loss projection in half.

Some Democrats moved swiftly to cast Republicans as irresponsible for calling for a special session as early as May, but legislators on both sides responded with a mix of optimism and caution. Rep. Drew Stokesbary, lead budget writer for House Republicans, said the forecast is one for the books. “This might be the single best revenue forecast update in the state’s history. I can’t imagine we have ever had a forecast that said, ‘we now expect to collect $4 billion more than we did 3 months ago.’”

Seven legislators with influence over Washington State health policy gathered last week 2020 Inland Northwest State of Reform Virtual Health Policy Conference to discuss their observations since the previous legislative session ended, and how the pandemic in 2020 will impact the work of the legislature in 2021. There was bipartisan agreement among the legislators who attended that Medicaid cuts should be a last resort next session, while there was some variation in the priorities they said were at the top of their respective to do lists.

Additionally, three government relations professionals offered their perspectives on the road ahead during the “Capitol insiders discuss health policy” panel. All three panelists agree that a key question that will impact the upcoming legislative session revolves around whether legislators meet virtually or in person. A virtual-only model could limit the number of bills that will be heard in committee, forcing chairs to be even more selective with the bills they advance.

The Washington State Department of Transportation (WSDOT) suspended 65 projects amid the COVID-19 pandemic – a total contract value of $2.3 billion – according to a WSDOT presentation in the House Transportation Committee last week. Assessing the impacts of I-976 in conjunction with COVID-related revenue reductions, the Transportation Improvement Board said that existing contracts for some projects are delayed by one
construction season.

In the House Public Safety Committee, members were offered a roadmap for exploring new models of funding public safety. The five-pillar “roadmap” created by the Center for Policing Equity involves analyzing public safety service demand, mapping inefficiencies, gauging public opinion, and implementing “focused deterrence.” Looking ahead to next session, Sens. Jamie Pedersen and Manka Dhingra have laid out a set of policy goals for policing reform they want the Legislature to take on.

Twelve days ago, the Wire’s Michael Goldberg reported that Maia Espinoza had not completed her masters degree, as she claims to have done in her voters’ guide statement. When we asked her about it at our OSPI debate, she said “I’m still in the middle of my capstone project,” and that she was “not at all surprised that a white man in power wants to diminish my credentials as a young woman, you know, a minority woman at that.”

I kinda thought that was that, but the oddity of these inaccuracies continues. Over the weekend, Espinoza was asked by Q13’s Brandi Kruse about the inaccuracy of her voters’ guide statement, and why Espinoza didn’t add more context. Espinoza said “I wrestled with that… but I didn’t think that would read very well when voters were voting.”

Also this weekend, the AP reported that the 501c3 non-profit that Espinoza runs actually does not have 501c3 status. A board member of hers, state Rep. Alex Ybarra, said “It’s not something I ever looked at. I don’t know what a 501(c)3 tax status is.”

5. Race in 3rd CD could be tightening

I was a little surprised that Jamie Herrera Beutler performed so strongly in 2018, in a tough year for Republicans. JBH racked up a strong 56% in this year’s primary, too. So, I’ve just assumed that the 3rd CD would remain a “lean R” district, though Congressional Quarterly calls it a stronger “Likely Republican” seat.

However, a new internal poll from JHB’s 2020 challenger, Carolyn Long, shows only a two point spread, within the margin of error. This race could be one that illustrates the down-ballot impacts of the presidential race. The poll also found that Joe Biden is tied with Donald Trump in the district.