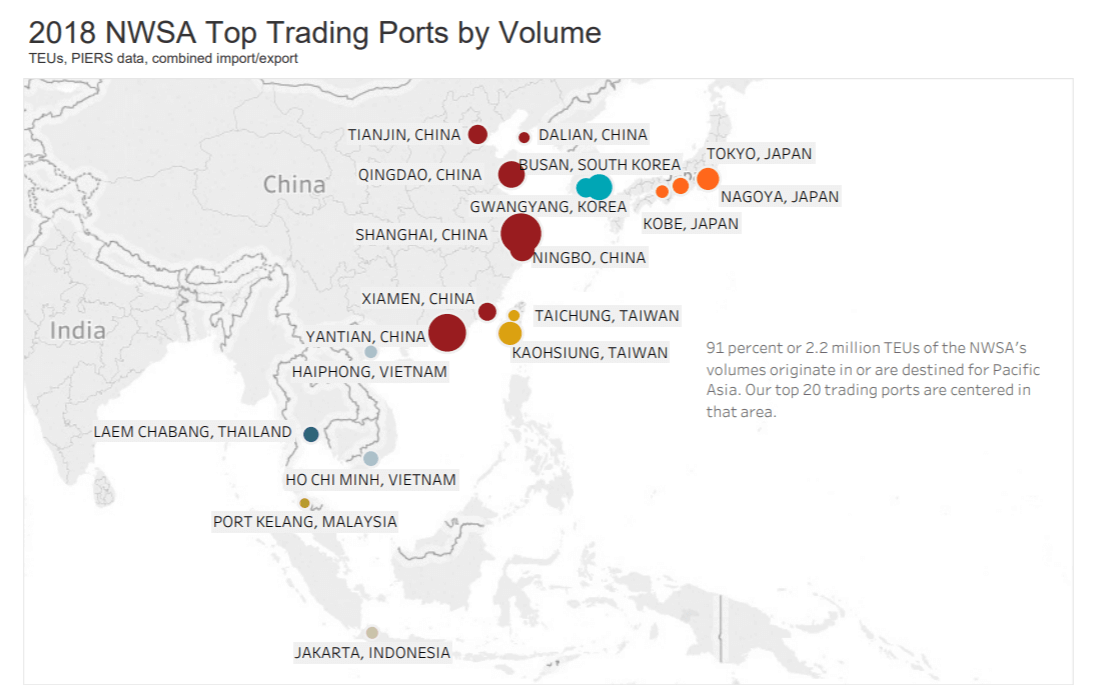 We get into the weeds on economic data in this issue of the Morning Wire – and frankly, it’s more depressing than even I expected. Our reporting turns up meaningful shifts in trade patterns, in growing rural poverty, and in the direction of the US economy. There is more to the nature of our Washington State economy in 2019 than the nation-leading state GDP numbers from 2018 suggest.

Washington State moved into a trade deficit with China for the first time in recent years. The $360 million deficit in 2018 is a sharp swing from a $9.1 billion surplus in 2015. Reporter Sara Gentzler spoke with stakeholders around the state on the impact of tariffs and President Trump’s recent trade policies. She found exporters were getting hit particularly hard while imports largely held steady.

2. Are we on the cusp of the next recession?

37% of Washingtonians can’t afford the basic necessities of modern life, according to a new study from the United Way. This ranges up to 55% of residents in Adams County, 52% in Whitman, and 47% in Yakima. Meanwhile, only 26% can’t meet this threshold in Kitsap County; 28% in King. Sadly, this may reflect something of a hollowing out of Washington State’s rural middle class.

More broadly, I think there are real reasons to ask if we are on the cusp of a national recession. Since a recession is defined as two consecutive quarters of negative economic growth, and since that is by definition backward looking, we wouldn’t know that Q3 and Q4 2019 economic numbers were recessionary until May, 2020. But, a look at some of the underlying economic data suggests the recession could start as soon as July 1.

Sen. John Braun has served in Washington’s Senate since 2012. He serves as Ranking Member on the Senate Ways & Means Committee, and on the Financial Institutions, Economic Development & Trade and Labor & Commerce Committees. Previously, he served as Chair of Ways & Means in 2017.

As one might expect, Braun has a lot to say about the budget and tax bills that passed this session. He covers that in the first installment of a three-part interview with reporter Sara Gentzler. In Part Two, he talks about the role of collective bargaining agreements and what it was like working with Ways & Means Chair Sen. Christine Rolfes. The final installment covers partisan narratives surrounding budget-writing and Braun’s policy priorities going forward.

The “Washington Indian Health Improvement Act” passed this session in what is a thoughtful, structural approach to making improvements to support native and tribal health. Laura Lundberg and Sara Gentzler report on it here. In 2016, CMS told the statethat some Medicaid services for American Indian and Alaska Natives (AI/AN) could be 100% covered by the federal government. This would replace the existing federal contribution, ranging from 50% to 90%, depending on eligibility.

That meant the State of Washington could save between 10% and 50% on the cost of AI/AN beneficiaries. Rather than lose those dollars to the general fund, Sen. John McCoy and a bi-partisan group of sponsors directed that the savings be placed back into tribal health. A new Indian Health Advisory Council will oversee and govern the expenditures. Tribal leaders will join a caucus member from each of the four corners on the Council. It will be a significant source of new funds for AI/AN health care in the state.

Back in October 2018, I wrote that changes to Washington’s rules related to overtime pay had “the potential to be the most significant change in labor law since the advent of the $15 minimum wage.” Last week, the Washington State Dept. of Labor formally proposed the rule, following a process that included two pre-drafts.

Currently, employers aren’t legally required to provide protections like overtime pay or paid sick leave for salaried employees who make over roughly $24,000. The most recent pre-draft rule ahead of last week’s proposal would’ve raised that salary threshold to between 2 and 2.5x the state minimum wage starting in January 2020 ⁠— the final proposal landed on the top end of that range, increasing the threshold incrementally to 2.5 times the minimum wage over six years. But the rule-making process isn’t over yet. Six public hearings on the proposal will take place this summer.