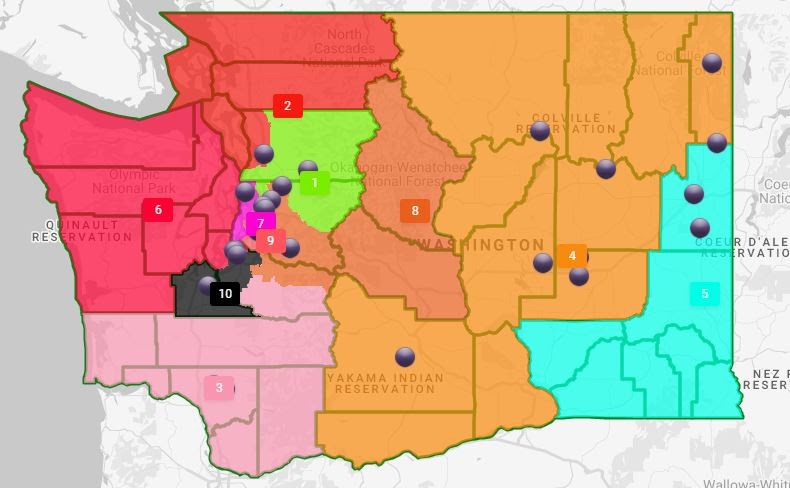 When I used to longboard, one of the most important skills was learning how to fall. Do it wrong, and you’re in a world of hurt. If, however, you figure out how to do it properly, you’ll walk away with a lesson learned and hopefully not repeat the same mistake. That same rule applies to journalism, and if I make mistakes, I prefer to take my lumps and learn from them.

So on that note, my apologies for incorrectly stating that Sen. Doug Ericksen lives in Lynden in our last Morning Wire. We strive to build trust through accuracy, and take seriously our work of keeping our readers informed. So on that note, if you see errors or coverage that you disagree with, reach out. We may not always see eye to eye, but we’re happy to have a conversation.

Last week, the Redistricting Commission released four proposed Congressional District maps. Many of the commissioners’ most dramatic changes were in western and northwest Washington, although as you can see above, Brady Piñero Walkinshaw did propose significantly expanding the 4th CD to include the northeast corner of the state.

Of particular interest, three of the four commissioners decided to keep the 8th CD running across the Cascades. One notable move came by way of Democratic-appointed Walkinshaw’s map, where he proposed stretching the district west to include Mercer Island. In another proposal from Republican-appointed commissioner Joe Fain, Issaquah would be removed from the district but the 8th CD would expand north to include eastern portions of Snohomish, Skagit, and Whatcom counties.

2. A conversation with Dr. Karen Johnson on the Office of Equity

Dr. Karen Johnson was named to lead and develop the recently created Office of Equity last February. Since then, her small staff has held listening sessions with more than 90 groups, and met with more than 1,000 people to figure out how to create a fairer and more equitable Washington. Dr. Johnson will be making budget requests to expand her staff, develop a five-year equity plan, and create a website in the upcoming legislative session.

During a panel discussion last week hosted by the nonprofit Up For Growth, Rep. Nicole Macri (D-43rd LD) said she’s thinking of proposing bills to incentivize housing density, preempt local zoning policy when needed, and create more renter protections. It’s in line with a pair of bills she introduced in 2020 that would have allowed more dense housing in cities with more than 15,000 residents, and limited how much rents could be raised.

Even though those bills didn’t clear committee, Rep. Macri said she introduced them to move the conversation around housing forward in Olympia. While state-level zoning proposals have historically been unpopular, Rep. Macri said the continuing housing crisis may push lawmakers to reconsider their opposition. She’s not alone in thinking of these issues either, as the idea of state-level zoning reform is also supported by other Democratic Representatives.

December is quickly approaching. And here at the Wire, that means we’re busy preparing for the 2021 Re-Wire Policy Conference. We held our Convening Panel meeting last week, where we gathered input from leaders across the state to identify the topics and issues that should be featured at this year’s event. Without tipping our hand too much, some of the discussions we’re thinking of hosting include tracking the use of ARPA funds, what we’ve learned from the pandemic about running government, and how to equitably approach broadband to address the digital divide.

If you’re interested in attending, be sure to register here. We’ll also be reaching out to folks who we think would be a good fit for our panels, beginning in the coming weeks. Whether as a participant, or an attendee, we look forward to seeing you in little more than two months.

5. Revenue forecasting during and beyond a pandemic

To get a better idea of challenges to revenue forecasting during the pandemic, we spoke with representatives from both Yakima and Pierce counties. Both have significant portions of their population living, and paying taxes, in unincorporated areas. In both counties, it appears that federal spending through unemployment benefits and stimulus packages propped up consumer spending and consequent county budgets.