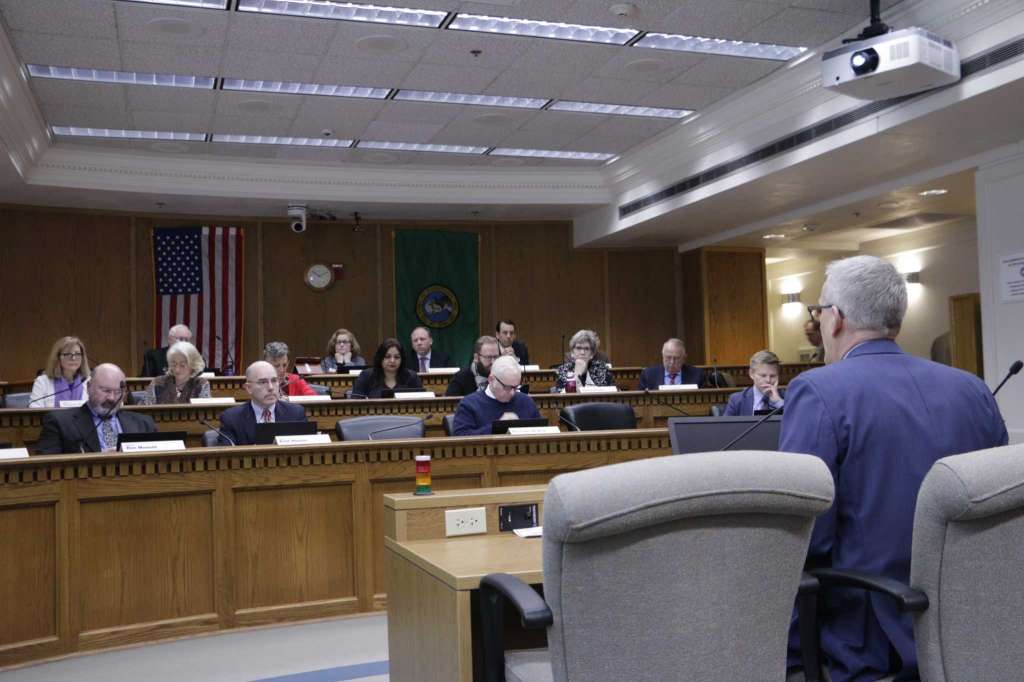 Today is day 51 of the 60-day legislative session, where the budget process is taking up much of the oxygen. For a run down of some of the dynamics in the budget making process, read about the 90%, the 9% and 1%.

Lots of coronavirus content today, so lets get to it.

With help from Michael Goldberg
and Madeline Shannon

With the news that the coronavirus has been spreading openly in Washington State for at least six weeks – and that no alarms went off while it did – it means that somewhere between high hundreds and low-four digit thousands of residents have likely contracted the virus. The rate of infected appears to double every 6.1 days. Confirmed rates are set to “explode” as increased testing occurs.

It’s a public health failing of the first order, placing Washington State on par with China’s Wuhan province as this nation’s epicenter.

In South Korea, for comparison, drive thru testing sites are set up where 10,000 were tested in one day. China shut down an area with 11M residents and put travel restrictions on 780M. I can’t see America doing either, though the Trump administration is considering using the “War Powers Act” to direct manufacturing of a new vaccine.

2.  How the operating budgets address COVID-19

Department of Health (DOH) Secretary John Wiesman briefed the Senate Ways & Means Committee in Olympia yesterday on the statewide response to coronavirus and its projected costs. He said 100-150 DOH staffers have been assigned to a response effort focused on increasing the surge capacity of health care systems and utilizing telemedicine services to mitigate increased demand at hospitals.

According to Wiesman, the current spending rate is estimated to top $60,000 per day. Madeline Shannon reports that Secretary Wiesman asked for $100 million from lawmakers on Monday morning. Late yesterday, Rep. Cody and Rep. Schmick introduced legislation to fund $50M from the rainy day fund for coronavirus response. Last week, initial supplemental budgets had between $5M and $10M for virus response.

3. Sens. Gorton, Evans call for reform of US Senate

Last week, in a rare bi-partisan rebuke of the current state of our policy making process, 70 former US Senators – including Washington State’s Slade Gorton and Dan Evans – signed an open letter to the sitting members of the chamber saying, “We are writing to encourage the creation of a bipartisan caucus of incumbent senators who would be committed to making the Senate function as the Framers of the Constitution intended.”

Since the Constitution’s birth in 1789, there have only been 1,884 former US Senators, with another 100 still serving. 162 are still living. The chamber, more than any other place in American government, still advances the cause of a “more perfect union,” binding together a diverse nation.

Bi-partisan calls for institutional reform like this one are rare, and worth noting.

4. Super Tuesday and why WA is more important than you think

As results come in from Super Tuesday states, remember that candidates can only be awarded delegates if they cross the 15% threshold. In California, that means Warren and Bloomberg combine for 29.6% of the vote, according to polls. But, neither may be awarded delegates tonight. Moreover, LA County with 10M voters, is historically very slow in counting ballots, so it may be a week or two before we know the true delegate count. Texas is in a similar situation.

That elevates the importance of the March 10th primary in Washington. Based on current polling, there is a chance that only Bernie Sanders will get over the 15% threshold in Washington State. That could mean that Sanders is awarded all of the 89 pledged delegates from the state, creating a huge haul for him and a potential difference maker in the race. If CA and TX, with more delegates, are about evenly divided, it makes the 89 vote delta in Washington a very big trophy.

Peter Schrappen is the Vice President of the Northwest Marine Trade Association. He’s an old hand in Washington State politics, well liked by practically everyone in his 20-plus years in campaigns and lobbying. Recently, Schrappen started a podcast where he landed an interview with Rep. Frank Chopp. It’s a great listen, in spite of him name-dropping me early on. More importantly, it’s a great insight into Chopp’s thinking, who is unquestionably one of the state’s more important political figures since statehood.

Throughout the session, he has dropped insights about lobbying for folks interested in the trade from the outside, like “When disagreements with key people pop up, it’s good to refocus on their goals and align around what they care about as it relates to your issue vs continuing down the path of disagreement.”