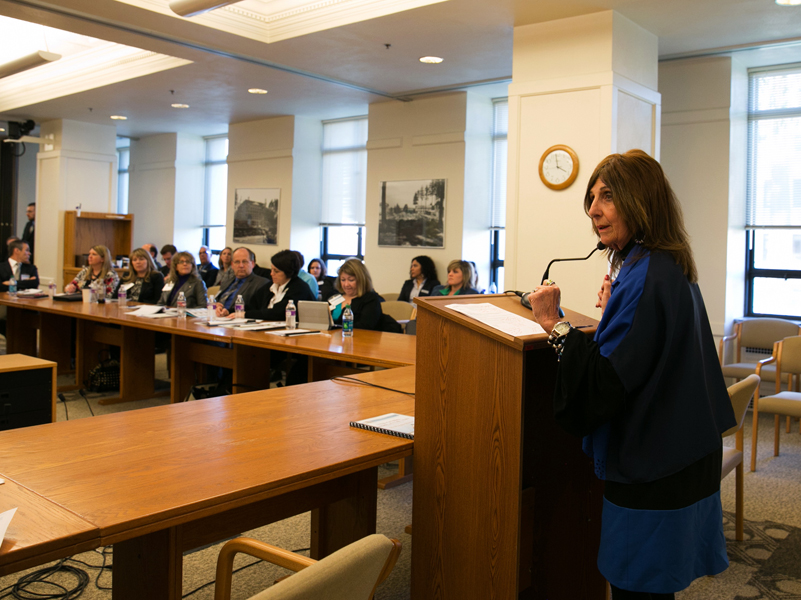 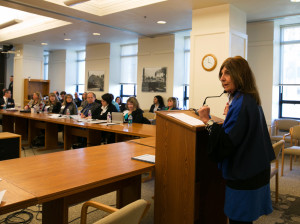 OLYMPIA, Feb. 21.—How soon they forget! Senate Democrats voted en masse against a teacher evaluation bill during a dramatic floor vote Tuesday night, after heavy lobbying from the Washington Education Association convinced them of the horror of it all. Yet in olden times they actually thought the bill was a good idea. This was seven whole weeks ago.

And it is always a convenient thing when both sides of the argument are advanced by the same person. So in the interest of full and fair debate, Washington State Wire today is throwing open its space to Sen. Rosemary McAuliffe, the Senate Democratic education chief who appears to be leading the charge on both sides of the issue. In a press release from Dec. 30, McAuliffe did an outstanding job of presenting the case for the bill. The press release vanished for some unexplained reason from her official website Thursday morning — must have been some sort of a glitch — but we have corrected that teeny little problem by re-presenting it below. School districts would lose roughly $40 million, she said, and worse, parents across the state would be notified that their local schools were “failing” – not something anyone ever wants to hear, particularly when it comes time to pass school bond issues and levies.

Yet in her floor speech Tuesday night, McAuliffe presented a decidedly different argument – she wasn’t introducing the bill because she actually wanted it to pass. She just wanted to collect public comment.

Come again? “Many times we legislators introduce legislation to hear testimony regarding that legislation,” she said. “I heard testimony over the last few months – I heard from my neighbors around the state that this is not a good thing, to use state tests to measure student growth.”

She went on to declare that the Legislature should not muck with the teacher-evaluation bill it passed in 2010 and refined after lengthy debate in 2012. “I have also determined that there is no empirical evidence or research to support using state standardized tests to measure student growth. This is not the direction we want to go. We have one of the best evaluation programs in the nation. And we do not want to break it. …We must respect and honor the evaluation program that was built from the ground up by our hard-working teachers and principals.” 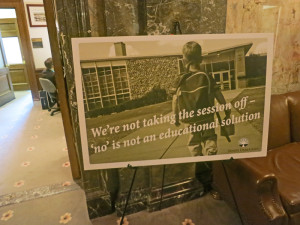 A wee bit of irony? A sign that has been posted outside the door of the Senate Democratic Caucus room no doubt was intended as comment on the Supreme Court’s order to lawmakers to develop a $5 billion funding plan for the K-12 schools.

The new statement that showed up on McAuliffe’s website on Thursday, two days after the vote took place, criticizes the leadership of the Senate Majority Coalition Caucus for forcing an “up-or-down vote on a bill that didn’t work.” Which might strike you as a bit odd, when you consider that the language in the bill considered on the floor Tuesday night was taken directly from the bill McAuliffe had introduced. No one would ever suggest that a bill is written in stone — measures are frequently amended on the House and Senate floors by their sponsors. Democrats actually prepared an amendment to the bill that might have reflected whatever changes they might have liked to see. But there’s no real point in going back and reading it, because they withdrew it before debate could begin, and just voted no on the whole thing.

While McAuliffe’s speech might remind Washington State Wire of the kind of statements that emerge from prisoner-of-war camps after thoughtful captors offer re-education programs to the inmates, perhaps it is best to refrain from comment here, and simply allow McAuliffe to continue the debate without us. Curious followers of legislative politics will no doubt be disappointed to learn that the press release cannot be found on McAuliffe’s official website, even in the archive section. It disappeared within minutes after (Tacoma) News Tribune reporter Peter Callaghan noted its continued existence in a tweet. But never fear. Washington State Wire managed to scare up a copy, and we’ll leave it here for the ages.

OLYMPIA, Dec. 30.–Legislation proposed yesterday by Sen. Rosemary McAuliffe, D-Bothell, would strengthen the state’s teacher-principal evaluation system and enable the federal Department of Education to renew Washington’s waiver from the No Child Left Behind (NCLB) act.

“Our children deserve the best education possible. It is critical to have the best teacher in every classroom, and a good teacher-principal evaluation system is an important part of making sure that happens,” said McAuliffe, the ranking Democrat on the Senate Early Learning and K-12 Education Committee. “We must balance the need for a strong evaluation system while supporting our educators and school districts by giving them the ability and time to adapt to our evolving evaluation laws. SB 5960 is an important step in that process.”

Washington’s waiver from the NCLB act was placed on “high-risk status” this past summer by the federal Department of Education (DOE). The federal waiver from the NCLB provides the state and districts critical flexibility for meeting goals for student growth. Additionally, the waiver allows Washington school districts to qualify for approximately $38 million in federal funds. These funds are vital to serving our neediest students.

The DOE directed Washington to require the use of state test scores in math, reading and language arts among the multiple measures of student growth in Washington’s teacher and principal evaluations as a condition of renewal of the waiver. Currently, Washington law does not require school districts to use results of student test scores on state assessments in teacher and principal evaluations, though districts do have that option.

McAuliffe’s legislation would require student scores be used from language arts and math assessments as one of the multiple measures of student growth under which teachers and principals are evaluated, as directed by the federal DOE and the NCLB act.

“Math and language arts were the specific subject areas where the DOE told us we needed to make a change in our evaluation system,” said McAuliffe. “It is important that we meet these federal guidelines and this legislation is targeted to the required subject areas to continue to receive the federal waiver. I continue to strongly support the work of our teachers and principals who developed a strong evaluation system from the ground up. Washington State is a leader for implementing a system that provides our teachers opportunities for professional growth. ”

The legislation will be considered during the next regular legislative session beginning Jan. 13, 2014.